Making magic happen: the rise of Magic Johnson the entrepreneur 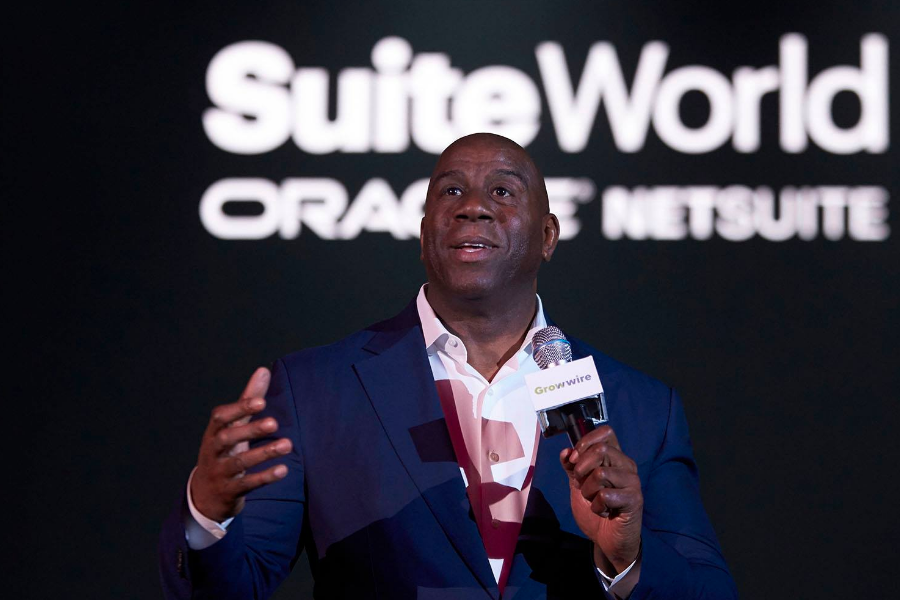 Magic Johnson is the king of reinvention. Known as one of the best basketball players of all time, Johnson retired from the NBA after 13 years following a shock diagnosis of HIV. While the world wrongly waited for Johnson to die, this monolith of a man took stock, regrouped and re-emerged triumphant as a business owner and entrepreneur.

Johnson’s admission of HIV 27 years ago was a revelation for many Americans. At the time, LA Lakers physician Michael Mellman held Johnson up as a hero for revealing his status, telling Time magazine:

“What we have witnessed is a courageous act by a very special person. He is not compelled by any legal description or legal requirement to disclose what he has disclosed today.

“He is not a person who is invisible. Because of his presence and potential impact on society, with a situation that is not only serious but from which we are all at risk, I think he should not only be commended but held as a modern-day hero.”

Today Johnson is happy, healthy, and a phenomenally successful businessman. That million dollar smile for which he was known on the court still remains at the ready and his sense of humour is only outstripped by his warmth and height.

A serial entrepreneur, Johnson has morphed from a movie theatre owner to Starbucks entrepreneur to real estate mogul to community builder and back again. When it comes to business, he has the Midas touch.

Speaking at SuiteWorld in Las Vegas, Johnson attributes much of his success to a willingness to work hard. He tells a spellbound audience, working hard is something that was part of his DNA – that and winning.

“When I think about basketball, for me, it was a tremendous platform for me to start my brand, to understand winning, and be a competitor,” he says.

“The high school I went to had no winning tradition; I had to figure out how to change that. I had won every championship before that, so I planned on winning in high school as well. I called all the players and said, I want to work out all summer and fall.”

The extra training paid off and Johnson’s high school team got off to an eight-nought start, eventually making it to the finals. If there’s a lesson in the tale, it’s that hard work and determination pay off: they certainly have for Johnson.

After quitting the NBA, Johnson says he knew he needed to start his own business but he didn’t have the necessary skills.

“The key for me was getting mentors. I cold-called 20 CEOs and asked them to lunch, and I was able to pick their brains. I knew from basketball that preparation was key; I’m focused and I’m driven and I’m one of the most disciplined people you will ever meet. I vet every meeting and every deal, so when I was picking their brains to start a business, I discovered self-evaluation is key.”

With this in mind, Johnson turned his attention to his own community.

His first venture saw Johnson investing into movie theatres. “We go to the movies a lot but there were no theatres in our community,” Johnson explains.

The naysayers suggested Johnson was foolish to be putting his dollars into cinemas, but as usual the big man had the last laugh.

“Our first movie theatre ended up topping revenue for its opening weekend and was one of the highest grossing in the business.”

Next Johnson turned his attention to the ubiquitous coffee franchise, Starbucks. But Johnson didn’t want to be a simple franchisee, he wanted to own the business. He entered into a 10-year deal to deliver Starbucks stores across the US. Again, he took his ventures to the urban heartland.

“They said, no way will minorities pay $3 for a cup of coffee! I thought they were wrong, but we had to do things a little differently. We don’t know what scones are, so I had to take scones out of my Starbucks and replace them with pumpkin pies and peach cobblers. And I got rid of the Andrea Boccelli from the playlist and in my Starbucks you hear Earth Wind and Fire. Why? Because you have to know your customer, and you have to over-deliver to your customers. My customers didn’t want classical music and scones!”

In Johnson’s world, the customer is always King.

“So here I am reinventing myself from the basketball court to the boardroom, but what I know is your customer is the thing. We have to over-deliver to get the retention. And at my Starbucks our satisfaction ratings were through the roof. I’m driving ROI and it’s higher in urban America than in suburban America.

“But I always have an exit strategy, and our exit strategy with Starbucks was we had a 10-year deal. We built 125 Starbucks in six years; we were making so much money and we had already fulfilled and exceeded our contract, so they came to me and said, you’ve already exceeded the deal, you could sell – so what do you think I did? I sold!” Johnson explains.

“I used to own the Lakers at the same time, but my man Kobe Bryant was getting old, so what do you think I did? Sold it.

“Then the Dodgers came up for sale. We paid over $2 billion dollars, they said we were crazy…but what they didn’t know was that our TV deal was coming up, which was $9 billion and the 300 acres of land the Dodgers own is worth $3 billion, so the land alone was worth more.”

At the time, however, the Dodgers were struggling; fans weren’t coming to the games and revenue was down. Despite making such a great deal, Johnson says he knew he had to turn the Dodgers around.

“We had to find out what was wrong. We changed the fan experience. We put money into the stadium and now we’re number one in attendance.”

The last piece of the jigsaw puzzle, then, was to crack the millennial market.

“A lot of people might not be ready for change, but you have to recognise that a millennial is a new customer. They want it now and they want it fast. The millennials that want to come to the Dodgers don’t actually want to come to see the game. They want to come for the experience of meeting their friends and hanging out, so we built a pavilion so they could stand around and socialise. But guess what they’re doing while they’re standing around? Buying so many drinks over and over!”

Johnson suggests resisting change is the enemy of business owners.

“I’m always open to change and I keep a lot of young people around me to make sure I don’t get in my own way,” he says. “When my kids say, ‘it’s not the same, Dad’ they’re right. The way they receive things is different to the way we received thing when I was young. You always have to keep that front of mind.”

Despite all his success, Johnson says he’s had plenty of knockbacks, and maintaining his resilience has been imperative.

“When I first started out in business they held me being a basketball player against me. I was funding everything with my own money,” Johnson explains. “I thought, how am I going to get the growth and sustainability? And I spoke to one of my mentors and she said, you’re doing it wrong – you need to use other people’s money.

Understanding your customers is another crucial element in the Johnson playbook.

“The secret sauce for me is to see what is wanted – what is missing – and deliver it.”

Learning from your mistakes is another essential.

“Everything I do I want to win. I want to win for me, for my partners, and for my community. But if I mess up, there’s two things: learn and change,” Johnson says.

“Back when I was playing basketball, I had excelled in every championship. We get to 1984 and I’m playing my rival Larry Bird in the championship. The first time in my life, I failed and didn’t perform well. I was the reason why we lost to the Celtics, I turned the ball over in too many key moves to the Celtics. So we lose. My rival is pouring champagne over his head and I’m crying in the locker room. And I cried all summer. And then I took a SWOT analysis of myself and I wasn’t as good as I thought I was. I worked all summer. And I was able to correct it and in ’85 a became a better player.”

It’s a lesson Johnson has taken with him to the business world.

“When someone won’t believe in you or your business you have to keep going. If I felt sorry for myself, I wouldn’t be here,” he finishes.

[The author was a guest of Netsuite. Johnson was a speaker at NetSuite, SuiteWorld, Las Vegas]