Damn Girl, why you always flirting to get my business for? 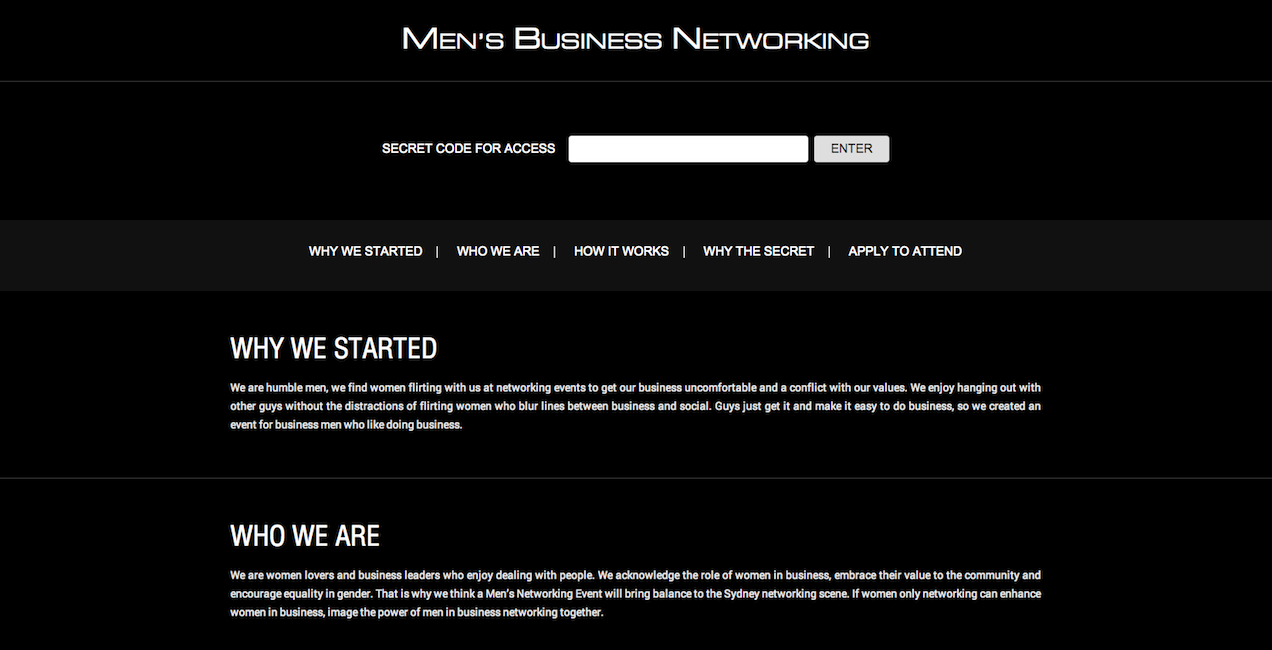 You know those times when you see seriously ‘what the fuck’ discussions happening on the internet and the rational you, the logical you, says “surely, they are trolling, right?”

Well that is what I thought was happening when I first saw the promotion of manbusiness.com.au – the ‘male only’ event that is being supported by The Village coworking space in North Sydney. And it wasn’t specifically the fact that a male only networking event is taking place. An argument could be made that women only business events exist so why is it sexist if a male only one does too? On the flip side, one could successfully argue that business, as a landscape is already a ‘boys club’ and this type of activity contributes further to the inequality faced by both female founders and employees on a daily basis.

If you read this publication you would have seen a recent short article that I wrote about a comment and slide presented at a recent startup event. Whilst I firmly believe that in general there was no ill intent from that particular presenter, what it highlighted was the importance words and attitudes used towards or about groups of people within society play.

My issue here – like in my previous article – is around the language used by the Men’s Business Networking group, with particular reference as to ‘Why they Started’ the group in the first place:

We are humble men, we find women flirting with us at networking events to get our business uncomfortable and a conflict with our values. We enjoy hanging out with other guys without the distractions of flirting women who blur lines between business and social. Guys just get it and make it easy to do business, so we created an event for business men who like doing business.

This is a stark contrast to the next section on their site where they describe ‘who they are’:

The first statement suggests a couple of things: first, that women use their sexuality to get what they want in business; and secondly that it is the fault of a woman if a man in business is distracted when talking to her. Further to that point, what actually constitutes ‘flirtation’? The variables are completely fluid. I know many deluded people that would purport they are being flirted with on a night out across all genders and sexual orientations and most of the time they are the only individual that holds that view.

Perhaps the most insulting part of that last sentence is ‘Guys just get it’. I mean I really don’t even need to break that down. It’s just a condescending thing to put in writing.

I don’t like getting on my sexism pedestal – I really don’t. But Startup Daily has 50% female readership; marginalisation in tech is rampant and our publication will always call people out on it.

Village Coworking responded further to the online criticism of the event in a blog post this morning – it focuses on why “they can” have a men’s networking event if they want to, when what they should have focused on was the messaging that they used to promote it.