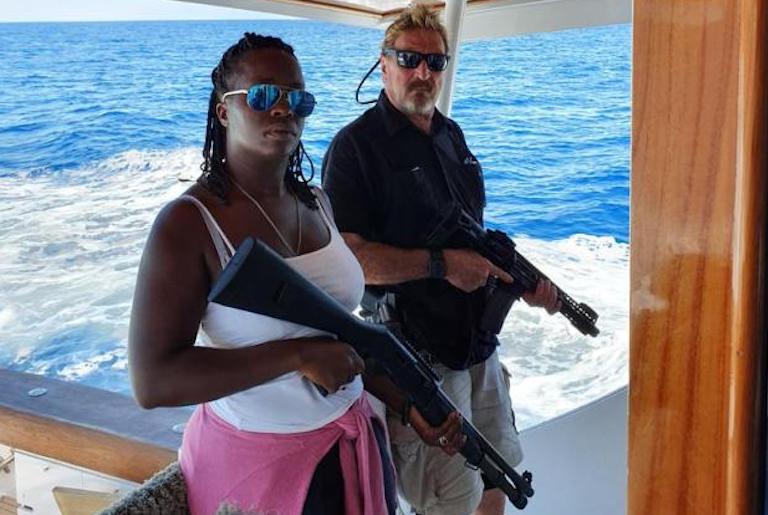 Janice and John McAfee aboard their yacht on the run from US authorities in 2019. Source: Twitter

Controversial antivirus software pioneer John McAfee has died. He was 75.

McAfee was found dead in his prison cell in Spain earlier today just hours after the nation’s high court approved his extradition to the US to face criminal tax evasion charges.

Spanish police say there were attempts to revive the prisoner and they are investigating the causes of death.

The expatriate US citizen was arrested in Barcelona in October 2020 on the tax charges, having lived a nomadic life since fleeing Belize in 2012 amid a murder investigation.

The prime minister of Belize at the time called him “bonkers.”

McAfee was never charged over the death of a neighbour and denied any involvement, but in 2019, a Florida court awarded a $25 million judgment for wrongful death against him.

The Estate of Gregiry Faul was just awarded a $25 Million judgement against me: https://t.co/OZ65Jirsb3
Here is my formal response to the media (who will spam my phones tomorrow and who are responsible for most of my 200+ lawsuits.) pic.twitter.com/Bsde9plr03

He fled the US in 2019 after a Grand Jury indict McAfee, his wife Janice and four others over tax-related charges.

He sailed around the Caribbean in a luxury yacht with his wife Janice “on the run” as he called it, with multiple phones and a large cache of weapons, and was arrested in the Dominican Republic in 2019 over firearms concerns before being released without charge after four days in detention.

McAfee appeared via videolink as a headline guest at Matt Barrie’s Startcon festival in 2019 and abandoned a US presidential run, having also run in 2016 as a Libertarian candidate.

He said he would not note last year.

Who am I voting for?

Why would I choose one person over another to control me?

Slave masters are the same.

We are numbers rather than people, irrespective of the master.

McAfee made his fortune building the anti-virus software that still bears his surname. He founded McAfee Associates in 1987 with a pioneering business model that gave away the software for free but charged fees for technical support.

The business floated in 1992, and McAfee sold out, reportedly making US$100 million, in 1994, also stepping away from the business.

The entrepreneur’s subsequent ventures included Tribal Voice, which developed the pioneering instant messaging service PowWow, and Future Tense Central and Cognizant which became DCentral and in 2016, he was chair and CEO of MGT Capital Investments before turning his attention to bitcoin mining and cryptocurrency in recent years

A literally colourful character who often sporting multicoloured hair, he routinely staged publicity stunts and took blistering pot shots at big tech companies and even the business he founded.

He also wrote the book “Into the Heart of Truth: The Spirit of Relational Yoga.”

Afraid of being assassinated, he was conscious of his own eccentricities, telling the US ABC 2020 program that “I’m a mad man to some people because, I don’t follow the normal rules, you know, the drummer that leads me is an odd drummer, but I follow the sound.”

Two years ago he got an arm tattoo saying “$whackd” showing it off on Twitter saying “If I suicide myself, I didn’t. I was whackd.”

Getting subtle messages from U.S. officials saying, in effect: "We're coming for you McAfee! We're going to kill yourself". I got a tattoo today just in case. If I suicide myself, I didn't. I was whackd. Check my right arm.$WHACKD available only on https://t.co/HdSEYi9krq🙂 pic.twitter.com/rJ0Vi2Hpjj

His focus on cryptocurrencies subsequently brought him to the attention of US authorities, who claimed he failed to declare income from crypto consultancy work. He was also charged over an alleged crypto pump and dump scheme via his social media accounts.

Earlier this month he wrote on Twitter that: “There is much sorrow in prison, disguised as hostility. The sorrow is plainly visible even in the most angry faces. I’m old and content with food and a bed but for the young prison is a horror – a reflection of the minds of those who conceived them.”

Last year he claimed to have been arrested in Norway while wearing a thong – women’s underwear – as a face mask, but later admitted it was a hoax.

My Coronavirus mask is the problem.

I am insisting it is the safest available and I'm refusing to wear anything else — for my health's sake.

And following the death of alleged of convicted sex offender Jeffrey Epstein, McAfee wrote that he didn’t commit suicide and was “maybe murdered”.

In one of his final tweets last week, after eight months in jail, he said he was broke.

The US believes I have hidden crypto. I wish I did but it has dissolved through the many hands of Team McAfee (your belief is not required), and my remaining assets are all seized. My friends evaporated through fear of association.

Yet, I regret nothing.

McAfee is survived by his wife of eight years, Janice McAfee.

Previous article Afterpay’s investment arm, AP Ventures, back delivery startup Sendle in $45 million series C
Next article A teenager and his brother have pulled off a $5 billion cryptocurrency scam
Via Other
Tags John McAfee