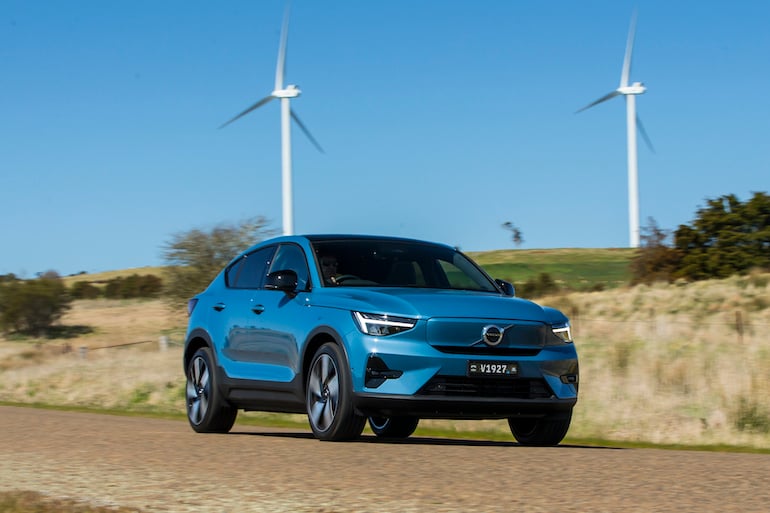 Volvo Car Australia is putting the sword to the internal combustion engine in its vehicle range, pledging to go fully electric by 2026.

The shift is four years earlier than the Swedish parent company’s 2030 global target and will mean the local Volvo business will need to get its skates on to replace the popular petrol engine XC SUV range.

Until now, Volvo’s only offering pure EV was the XC40 Recharge alongside a range of hybrid models, and there’s a long wait list. Last week it launched the C40 Recharge, with a single electric motor and front-wheel drive, and dual electric motors with all-wheel drive. It is also the first Volvo to be completely leather-free.

It’s one of five new EVs the company plans to launch in Australia ahead of the deadline, including a smaller city electric SUV, dubbed the EX30 in 2023, as well as the EX90, a seven seat replacement for the XC90, in 2024.

“The decision to sell only electric cars from 2026 makes perfect sense, and we believe it will  give us a strategic advantage in the Australian market. The final piece of the jigsaw will be converting the last 20% of our customers to a fully electric future from 2026,” he said.

“I am very confident we can achieve this, and even go beyond to achieve our aspiration of  selling 20,000 fully electric cars every year in Australia.”

“The earlier deadline will allow us to meet the expectations of our Australian customers,” he said.

“Sustainability is now as  important as safety to us, with climate action having the highest priority. Australian consumers are early adopters of new technologies, and they are embracing fully electric cars in increasing numbers as part of a practical response to combatting climate  change.

“There is no long-term future for cars with an internal combustion engine. So, instead of  investing in a shrinking business, we choose to invest in the future, which is fully electric.”

Connor said Volvo is currently the fastest growing brand in the Australian luxury SUV segment, clocking up record sales for the past four years.

Previous article Atlassian’s income grew by a third in a year, but quarterly losses continue as the revenue outlook falls
Next article How a billionaire went from genius to muskrat swimming in social media’s open sewer
Via Motoring
Tags electric vehicles