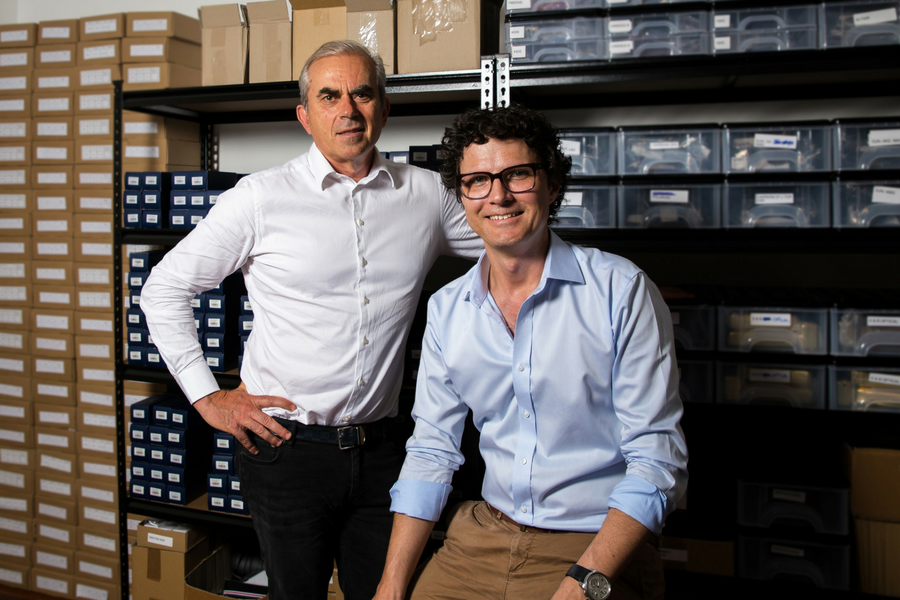 With online shopping now accounting for more than seven percent of total Australian retail sales, consumers are growing accustomed to buying most things with the click of a button, from books to gardening supplies to glasses.

When it comes to the latter, big chains such as OPSM and Specsavers may still dominate, but a couple of local startups have managed to cut themselves a solid piece of the pie.

The ecommerce offering evolved out of Russell’s bricks and mortar stores; as of 2015 he had a handful of OPSM franchise stores dotted around Perth and, in turn, he also had the challenges that came with them, from managing rent to managing stock, storage, and staff.

“I was shown the L’Oreal Makeup Genius app by some of my young female employees who thought it would be hilarious to see me wearing makeup. While I could never get used to seeing myself with makeup on, and it was hilarious, I was blown away with this new augmented reality [AR] technology,” Russell said.

Playing around with this app, coupled with a reading of the book Bold by Peter Diamandis, which goes through the societal impact new technologies such as AI and 3D printing will have over the coming years, Russell had his lightbulb moment and envisioned selling eyewear using the same AR tech as Makeup Genius.

Sharing the idea with Botica and getting him on board, the cofounders began working on solving their first problem: how to create the virtual try on experience.

Russell was able to identify Image Metrics, the team behind the Makeup Genius app and, with “a simple cold call” during which he shared his concept and asked for their help, brought them on. However, adapting the solution for glasses took some work.

“The original AR technology used in the Makeup Genius would break down if a user turned their head more than 20 degrees from the centre, and there was no ability for the technology to accurately scale a user’s face size,” Russell explained.

The Speqs service works by having a user download the app to virtually try on glasses, with the ‘True Fit’ feature allowing them to determine the accurate pupillary distance and segment height necessary for their eyewear after inputting their prescription.

Once they have determined their preferred style and colour, the glasses are added to the cart, with Speqs giving users the option to add their prescription later if they don’t have those details at the time of the order and contacting them later.

The startup’s website also works through a traditional ecommerce model, with users able to simply browse and add to their cart; Speqs then links users to the app if they want to try them on.

The virtual try on solution is also offered by a couple of other businesses in this space in one format of another. Specsavers, for example, allows users to try on selected frames by having them edited onto a short video taken through their webcam or smartphone camera, while startup Sneaking Duck has customers upload a headshot, upon which frames are then edited on.

Funnily enough, given a part of Russell’s desire to work on Speqs as an online solution came as a response to the challenges of running a bricks and mortar outlet, Speqs recently opened a flagship retail store in Perth. Like other optical stores, customers are able to physically try on glasses and have their eyes tested; if need be, they are also able to use the Speqs app with assistance to try on stock that may not be available in store.

Beyond the time-poor and the wider 25 to 45 age group, with its app Speqs is looking to in particular target those living outside metro areas who do not have easy access to optometrists.

“As a team we are excited to be able to provide access to the ‘big city’ eyewear shopping experience to Australians living in regional and remote areas, which is something we are passionate about,” Russell said.

For Speqs, the focus on ecommerce also means passing on lower prices to customers by forgoing the majority of retail costs.

“Through traditional brick and mortar optical retail outlets, glasses have already passed through an average of eight pairs of hands between manufacture and the customer. The retail price has to cover that entire logistical nightmare, as well as the overheads of the retail outlet itself. With the Speqs model we are able to deliver direct from manufacturer to consumer anywhere, anytime,” Russell explained.

Looking to the year ahead, Speqs will be making contact lenses available to consumers, and expanding its payment options.

Previous article How and when to appoint a board for your startup
Next article News, capital raising, and growth-focused content is what the local startup ecosystem wanted in 2017
Via Advice
Tags augmented realitybjorn russellecommerceeyewearfashionglassesinnovationneven boticaonline shoppingperthprescription eyewearprescription glassesspeqsstartupsvirtual realityvirtual try-onVTOWAWestern Australia