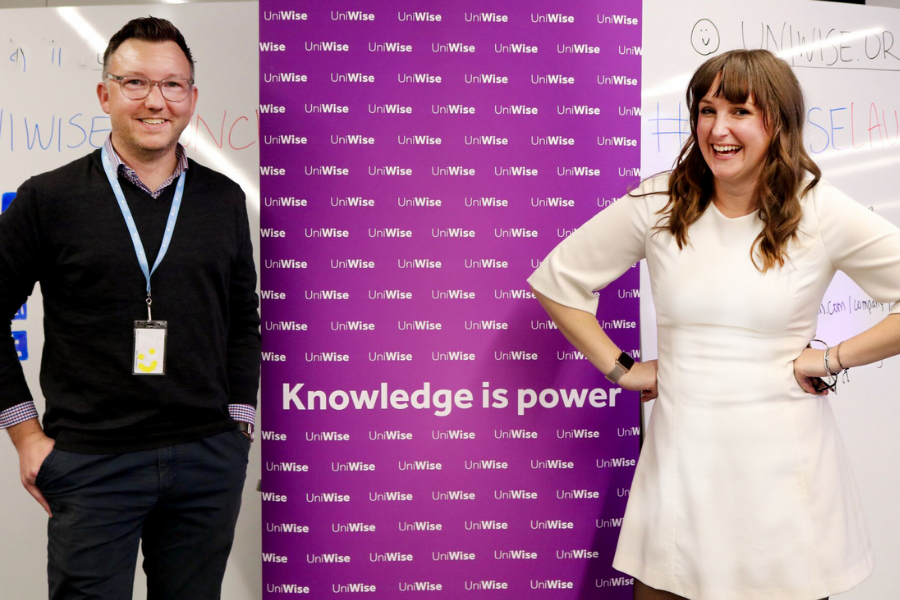 According to statistics from MBA News, the average cost of a master of business administration (MBA) course in Australia has risen to more than $51,000.

With more than 50 courses available across the country, MBA News reports the cheapest will set a student back $29,700 at the Australian Institute of Business, while the University of Melbourne’s Senior Executive MBA comes in at $121,800.

Making the decision to outlay that kind of cash is no mean feat, so you would want to make sure you have as much information available as possible to make the right choice – the only problem is impartial information can be difficult to find.

Founded by Kirsten Emes and James Armit, UniWise hopes to be the solution, allowing users to search, compare, and review courses around Australia.

The pair met in 2013, while working in management roles at RMIT.

As “self-confessed higher [education] geeks”, Emes said, they had shared frustrations about universities: how they were slow to listen to students, and tailor their products to the demands of their customers.

The idea for UniWise was then born of Emes’ own experience searching for a Masters program. Despite her knowledge of the higher education sector, Emes admitted the process was confusing.

“To make such a big decision with little more than marketing information provided by the universities, all of whom have a vested interest in having you there as a student, was frustrating to say the least,” she said.

Emes wanted to create a system through which prospective students could search, compare, and choose which degree to take, with insights from students who had actually taken the course. The idea, she said, was to create a website that would be “just as good as a conversation with a knowledgeable friend who could give you the advice you need.”

The idea was parked until Emes, then living in Barcelona, later received an email about the RMIT Activator program, which turned into the push she needed to start work on the idea.

Though she admitted the process has been, at various points, intimidating, challenging, confusing – “but most of all, fun” – Emes said having the idea and taking it through the Activator bootcamp and creating a minimum viable product was the relatively easy part.

“I don’t think either of us have ever considered ourselves to be entrepreneurial people, so getting in the mindset of believing that we can create something special has been a challenging one,” she said.

“Having that belief in yourself when no one else does, when you have to explain again and again what it is…in those moments where it feels like it’s just the two of you with an idea, you have to have huge belief that you are solving a problem that exists and that should be solved.”

The hard work came after the cofounders launched their MVP. As Emes put it, it was “ok, here it is – now what?”

She explained, “The list of things to focus on or that you could be doing with your time is absolutely endless! I think we have walked down quite a few streets we probably didn’t need to but by taking on some great advice we are focusing now on what the purpose of the product is and how to achieve that.”

As it stands now, that means getting graduates to review courses.

The review form is divided into five categories, such as facilities and content, with these based on what the cofounders determined through interviews with alumni were the key parts of an MBA program. The reviewer can rate each element out of 10 and, if they so choose, leave a comment.

Meanwhile, a prospective student can browse courses based on factors such as cost, location, mode of study, or specialisation. Each course is linked to the university page, through which the user can apply.

Universities themselves are able to contribute information to UniWise if they would like to; UniWise is looking to monetise by producing content such as alumni interviews and videos for universities to add to their profile.

As UniWise builds up its bank of reviews too, Emes said, it will provide universities with insights into their programs to help them improve their courses and offerings.

With the startup’s initial focus the MBA, Emes admitted that there are a few portals available for prospective students to find information on courses, however she believes UniWise is unique because of its priorities.

“Seek Learning have just started reviews, particularly for Bachelor programs, and they are a huge behemoth of a company who can generate a lot of information, but they are also a provider of some courses, so…have different priorities,” she said.

“That is where we see our value – we are an independent platform and our priority is the prospective student. Uniwise has a mission to change the way the postgraduate market works and to really disrupt the university marketing proposition – providing a platform where prospective students can get independent advice and choose the right MBA for them.”

With the platform live, the startup’s focus is now on building up its bank of reviews before it expands beyond the MBA to include more postgraduate courses.