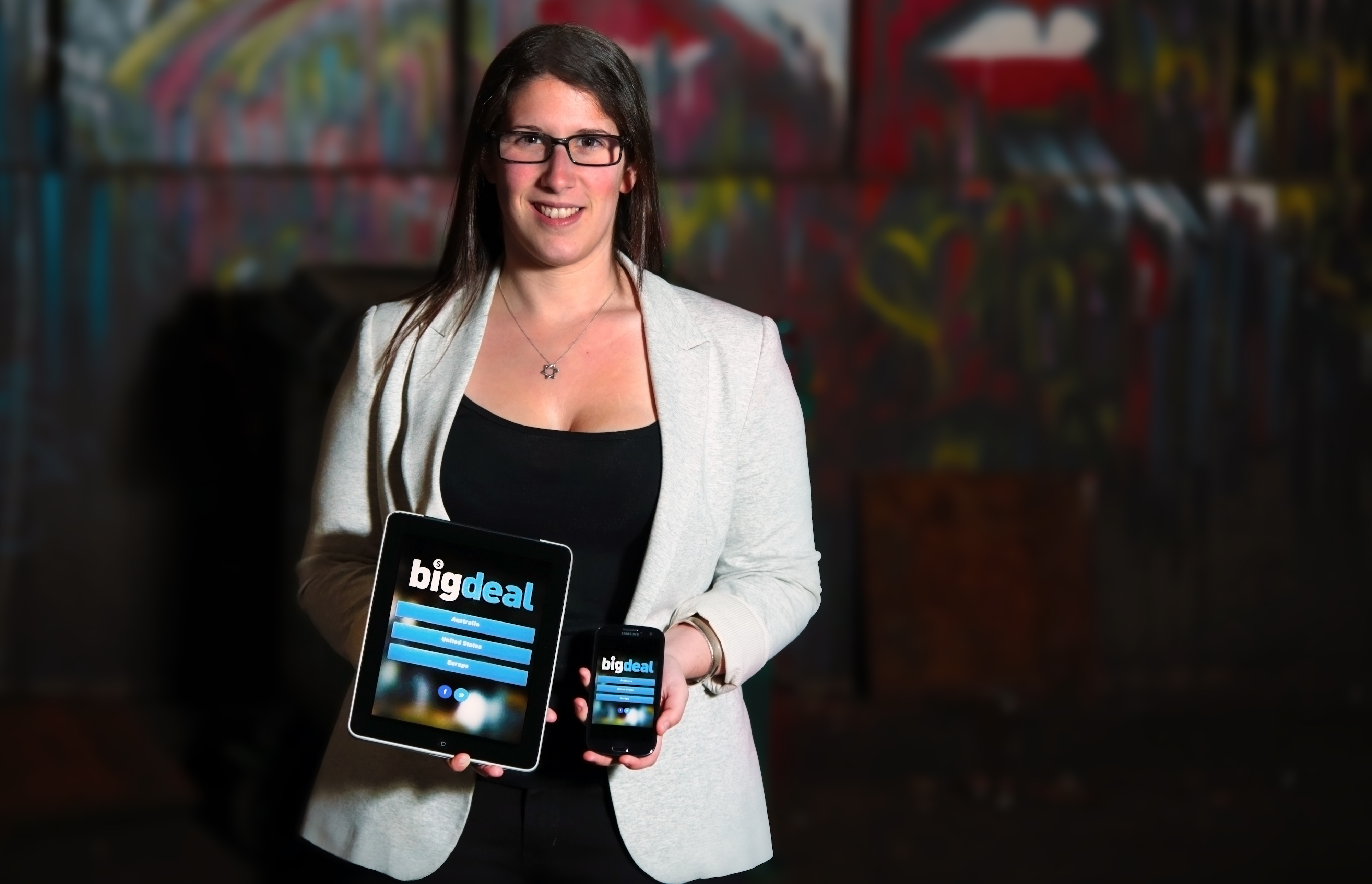 No more printing vouchers, paying online or making reservations, because new app bigdeal brings it all to your fingertips! This all-women Aussie startup is going against the grain of other ‘deal’ providers by allowing users to redeem offers instantly from their smartphone.

bigdeal is bringing the buzz back into the hospitality and retail industries by driving traffic in-store rather than online; and have created a new omni-channel for businesses to communicate with their customers, increase customer loyalty, generate new customers and increase sales.

The app also offers a simple way for consumers to save money on their favourite bars, restaurants, nightclubs, shops and more. Whereas other deal providers require its users to find vouchers online, pay for them, print them out and then make the reservation – with bigdeal, the deals are always in the palm of your hand providing “instant gratification”.

How does it work? The bigdeal app user just needs to search for where they are or where they’d like to go, select the deal they want, enter the code word and present it to staff. Every offer has a count down timer next to it – making it easier for the user to redeem their offer before time runs out.

The bigdeal development journey began at the end of last year. It is currently in the final stages of its launch and just days away from being rolled out across Australia, Europe and the US.

Founder and CEO of bigdeal, Emma Hoffman, says the idea for bigdeal came as a ‘light bulb’ moment, when she and Co-Founder Capel Robinson were catching up over coffee and Robinson asked ‘What about an app that lets you order cheaper drinks?’

At the time, the duo had been running a nightclub events management company for almost two years and were ready to branch out and expand their career horizons. They’d always admired other ‘apprepreneurs’ and had their heart set on developing their own mobile application had the opportunity emerged. And it did!

After Robinson asked that million-dollar question, Hoffman’s “eyes lit up” and she went home and thought more deeply about how they could apply this to the wider market. She very quickly realised that “this concept would be perfect for not only nightclubs but the entire hospitality and retail industries.”

Once they sketched out their vision, the bigdeal duo decided it would be in their best interests to self-fund the business.

“We didn’t want to start handing out large chunks of equity to just anyone who had deep pockets and we agreed that we would feel more accomplished if we invested our own hard earned money into the project; and also we would be more careful or put more thought into what elements of the business we chose to allocate our funds to,” says Hoffman.

The app has cost approximately $20,000 to develop – a worthwhile spend, they realised, when they saw their first prototype and knew they were “onto something big”.

“I suppose it’s on the cheaper side of the spectrum when it comes to app development but at no point have we ever compromised quality for price! It was important to us to produce an app that looked, felt and worked like it was worth a million dollars,” says Hoffman.

“We have been incredibly fortunate to have the best team of developers working with us, which is managed by Iain Dooley, owner of Working Software.”

bigdeal is targeted to the ‘tech savvy’ generation – predominantly people aged between 15 to 35 years – who are active social media users, high consumers of technology, and have disposable income to spend on consumables and entertainment.

“If we were to personify our target market it would be a person who is a fashionable, early-adopter, always on the lookout for the next big thing – whether it be a new restaurant opening, new club night, or shopping sales, whilst trying to get the biggest bang for their buck in a fun, fresh and engaging way,” says Hoffman.

They will be conducting a huge marketing campaign based around social media, guerrilla marketing and direct promotion.

“We wanted to steer away from mainstream broadcast media or paid publication advertising and do something a little bit more engaging,” says Hoffman.

bigdeal’s ‘codeword’ feature which is used to redeem a deal will also be used for unique marketing campaigns by the merchant.

“Users can expect to see a competition across our social networking platforms to keep an eye out for the secret codeword clues. The first person to enter the correct codeword will win a prize,” says Hoffman.

Each merchant receives a Promo Pack when they register with bigdeal to help their customers know that they’re listed on the app.

Instead of visiting each restaurant, bar, nightclub and retail shop globally and pitching the idea, bigdeal is partnering with various Point of Sale companies who act as the distributor and fast-track the merchant signup process.

“Each Point of Sale company has existing relationships with between 500 to 5000 merchants and existing sales teams; and this strategy means that bigdeal will grow at an exponential rate and ensure our corporate sustainability,” says Hoffman.

bigdeal is currently partnered with over 10 major Point of Sale companies that represent big companies and brands around the world.

“In fact, our business model is so unique that the Australian Taxation Department would need to change current case law to accommodate us. That’s how revolutionary and forward-thinking our brand is!” says Hoffman.

Unlike other deal providers, bigdeal will never charge any commissions or transaction fees – meaning the merchant will only ever pay the cost of membership.

“This way they have the freedom to add as many deals as they like during the membership period, without worrying about their budget!” says Hoffman.

The bigdeal team prefer to be positive-minded, seeing every step in the right direction as an achievement.

“We know how hard it is for most startups to get on their feet so we celebrate every new opportunity, partnership and venture with enthusiasm and excitement,” says Hoffman.

“Partnering with more than ten major Point of Sale companies across the world has been an extremely positive experience because we see this as our gateway to communicating with merchants and getting them onboard.”

They also recently returned from a trip to the US where they met with major companies and Silicon Valley tech startups “which was a huge eye-opener and really inspired [them] to push the boundaries.”

“At the end of the day though, it’s the little things that matter most – nothing is better than telling someone about bigdeal and seeing the excitement in their face,” says Hoffman.

Based on the amount consumer interest they’ve generated so far, their projections see them having approximately 10,000 active users by early November and 100,000 by February in Australia alone.

Hoffman explains that the biggest challenge for her has been fine-tuning her pitch to maximise interest.

“I learned very quickly that it’s no good bulk emailing lists of potential partners or members but to customize each interaction according to needs and principles of the company in question,” she says.

She’s made sure to thoroughly research each company before approaching and building a rapport with them.

“The reason that this was such a critical task to master is because without these partnerships, bigdeal wouldn’t be sustainable and is therefore essential to our continued growth,” says Hoffman.

Young and all-female Board of Directors

The bigdeal team are all aged in their 20’s, which Hoffman says is central to their brand ethos.

“Being the next generation of entrepreneurs, representing our generation and remaining very much in touch with our target market are crucial to the foundation of our business. We’ve walked in the shoes of our users and know what they want and how we can give it to them,” she says.

bigdeal also has an all-female Board of Directors, which is especially unique within the male-dominated realm of tech startups.

“It might be a generalisation but women are known to be better multi-taskers than men which is an absolutely essential characteristic for any tech startup,” says Hoffman.

“The world of ‘apprepreneurialism’ is still relatively new and I think we can expect to see many more female apprepreneurs rise to the top in the future.”

Her advice for other female entrepreneurs in the tech space is to realise that “in the mind of any entrepreneur, there are only two sides to the spectrum – success and failure.”

“Most entrepreneurs will tell you the same thing … they hate failure. The point of difference is how they measure success … Think about what success means to you and go after it. Never give up and never compromise until you’ve achieved your goals,” she adds.

“In doing so, make sure to plan effectively and know where you want to be in six month, twelve month, two years and five years. The world is your oyster so dream big and work hard!”

Once they establish themselves within the Australian, European and American markets, they will roll out into selected countries in Asia and the Middle East – such as Japan, Thailand, South Korea, Israel, Turkey, and the United Arab Emirates.

bigdeal will be available throughout restaurants, bars, nightclubs, cafés and retail stores in Australia next week, and plan on branching out into other industries such as supermarkets, convenience stores, petrol stations, pharmacies, and University campuses in the future.

Previous article Startup of the Year 2013
Next article You’re not a Growth Hacker! You’re a Marketer!
Via Advice
Tags AppAustraliabigdealCapel RobinsondealsEmma HoffmangrowthhospitalityinnovationMobileRetailsmartphonestartuptablettechnologywomen in business