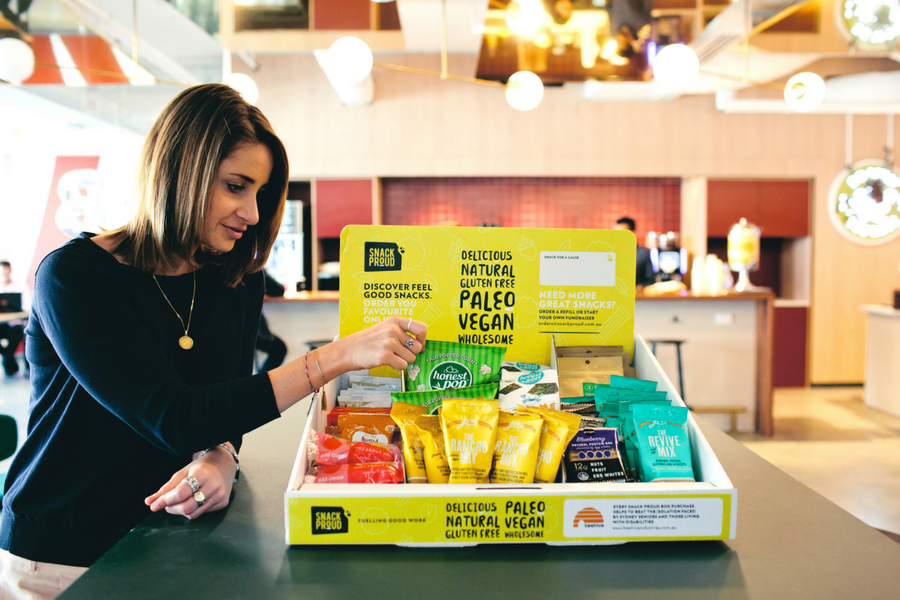 We’ve all been there: you’re at your desk and the usual bout of 3.30itis rolls around, right on the dot. You’re desperate for any kind of energy hit so it’s usually out to the cafe for another coffee and/or snack, maybe a brownie or, depending on what’s around and what’s open, a chocolate bar from a convenience store.

For many working desk jobs, particularly at tech companies where most meals and snacks are provided free for, let’s face it, the very purpose of keeping you sitting at your desk for longer, being healthy can be a battle.

Enter Sydney startup SnackProud. Founded by Ashleigh Whittaker 18 months ago, the startup looks to help companies do their part to ensure their employees are snacking healthily by providing snack boxes packed full of snacks that deliver the energy hit without sacrificing on nutrition.

Having launched a gluten free frozen meal company, Gem Meals, in New Zealand in 2012, Whittaker has long been passionate about food. However, it was after selling the business in 2014 and rejoining the corporate and tech world in Sydney in 2015 that she saw the need for something like SnackProud.

“There is a serious sugar culture among Australian tech companies waiting to be changed. I have been into a number of offices where the rolling joke is that the staff join the organisation and gain 10 kilos. This actually becomes very stressful for a millennial workforce who are the most health conscious generation,” she said.

Whittaker began working on a solution while working at Macquarie Bank. From her time running Gem Meals, she still had connections with health food brands and continued to attend trade shows, where she was discovering a variety of new snack brands that needed distribution channels.

And so SnackProud was born. With Macquarie Bank having 16 kitchens across its floors, Whittaker simply began buying snacks wholesale and, after getting approval, putting them in the kitchens at work.

With Whittaker convinced of SnackProud’s potential, she brought on the likes of LinkedIn and Indeed while still working at Macquarie, eventually outsourcing the logistics as she realised she couldn’t be delivering boxes all herself if the company was to scale.

In bringing on a new client, Whittaker will work with a HR or office manager to develop the company’s snacking profile and in turn their box by sending out a survey to staff.

“The biggest barrier that people had to achieving their health goals was convenience, and temptation in the office, whether that’s at a company that does all the food free or just the biscuit jar, so those are the two areas I’m trying to hit,” Whittaker said.

“We carefully select quality nutrient-dense snacks, from sweet and indulgent, to savoury and salty, all of which have a strong component of health and practicality within the workplace. We also encourage and engage workers in improved snacking habits by providing information based models, posters and guides to cue ongoing and consistent positive eating behaviours.”

From there, whether companies subsidise the snacks for employees or have employees pay is up to them, though Whittaker said tech companies that are already offering staff other meals free will usually supply the snack boxes.

For the others, Whittaker is currently working on a payments solution; the traditional honesty box system has worked in the past, she said, but the fact most people are carrying less cash than they used to – let alone the correct change – is an issue.

While at Macquarie Bank, Whittaker had fellow staffers send her payments for items directly through the bank’s app, but now she is exploring solutions such as tap and go terminals.

SnackProud has just wrapped up its time in the Lion Unleashed foodtech accelerator, run in conjunction with Slingshot.

As well as helping Whittaker with SnackProud’s business structure, she said the program has helped in broadening the company’s network, with SnackProud forming solid connections with its cohort and within the wider food and wellbeing sectors.

Lion is also trialling SnackProud at its offices, with its Sydney Olympic Park office particularly devoid of healthy snack spots nearby.

Looking ahead, Whittaker is keen to expand the SnackProud offering as the company grows, with the potential to include Lion’s and other beverages once SnackProud is able to incorporate refrigerated logistics.