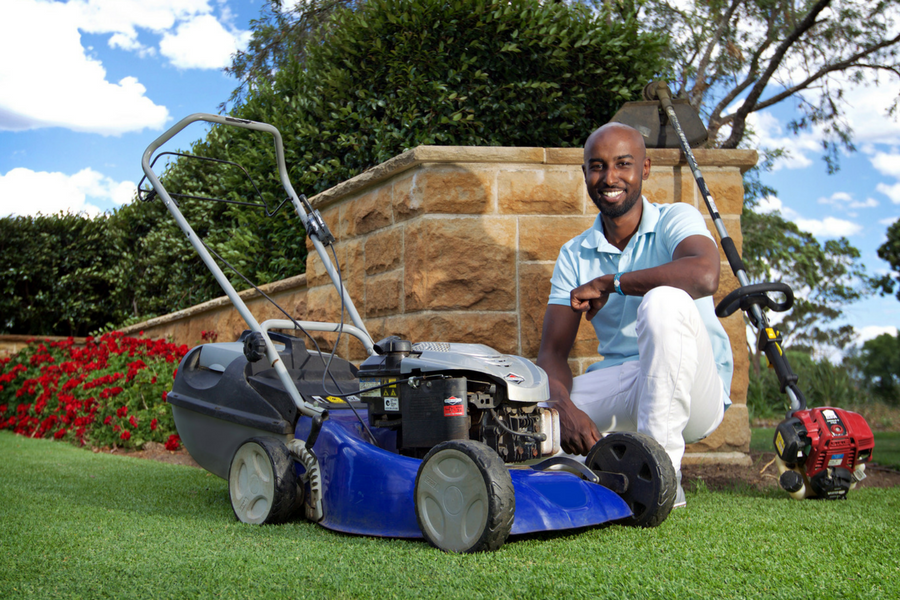 If you’ve ever seen a certain green trailer adorned by a white silhouette of a man with a fetching hat on your street, you could be forgiven for thinking all is trucking along just fine in the world of lawn mowing.

Recently launched Sydney startup Airmow, which connects customers who need lawn mowing on demand to contractors in their area, would say that in fact, the market is ripe for change. As cofounder Ahmed Ismail said, “We jokingly say there has been no real innovation in this industry since the invention of the lawnmower, which incidentally was Australian too.”

Of course, on-demand is so in right now, but where Airmow differs from, say, getting an Airtasker to come and mow your lawn is in its quoting system.

The platform uses satellite imagery to generate instant quotes to give customers an idea of what they’re set to spend before the contractor comes by, with the concept based on similar technology used by a solar installation company that Ismail had been working with.

Back in the day, he said, solar panel installation was “a hot business” to get into – and so he did.

“I was researching the market when I realised a lot of time was wasted on physical site inspection to quote, and I thought, how could the system be streamlined to be more efficient? At the same time I was using Google Maps’ satellite feature when it finally dawned on me; I didn’t even have to leave my office to quote, all the info was there in front of me.”

With that in mind, he sold his share in the company and went in on Airmow with cofounder Nathan Tran.

The idea had come to Ismail after he had to find someone new to mow his lawn and, after getting in touch with a couple of companies, was surprised by both the discrepancy in pricing and the fact that no one could come by on the same day.

“Even the leading lawn mowing franchisees gave wildly different prices for exactly the same job. Seeing a great opportunity, my colleagues and I brainstormed how we could use the satellite technology we pioneered in the solar installation industry to innovate the lawn mowing industry,” he said.

The Airmow platform works by linking customers to high resolution satellite imagery of their property, in-app, through which they then highlight the areas that require mowing; this is then used to generate a quote.

“Our algorithm incorporates a sliding scale that means larger properties do not pay the same rate as smaller properties, because there are certain upfront costs that are taken into account for each job,” Ismail explained.

Contractors using the platform can sign on and set their base address and define a driving radius, with this then becoming their work area. They then receive a notification each time a job request comes up in this area, and then swipe left or right, dating app-style, to express interest in a particular job. The customer then picks a contractor, and the contractor in turn receives a notification and a listing in their schedule, which they can either request to reschedule or cancel.

They are given the address two hours before a job, with the app providing navigation and the ability to call the customer. Upon arrival, the contractor is prompted to take ‘before’ photos of the lawn and garden, Ismail explained, and ‘after’ pictures once they’re finished, before marking the job complete.

They then leave a rating for the customer, and the customer rates them, with contractors then paid within three days of a job being completed. Airmow takes a cut of 20 percent.

Customers, meanwhile, log onto the app and enter their address to retrieve a satellite image of their property and begin highlighting the areas to be mowed. They then receive a quote, and select a time and date for the service, with Airmow also giving them the ability to schedule a particular frequency for the service.

The customer then makes their payment and receives job requests from contractors, and selects the one they want. On the day of the job they will then be notified when the contractor is on their way and when the job has started, and can receive the before and after images within the app before being prompted to confirm the job has been completed and leave feedback.

The platform is looking to onboard contractors with experience in the gardening space, with Ismail positioning Airmow as an attractive alternative to buying a lawn mowing franchise, where one must buy into the franchise, pay monthly fees, and pay for each lead.

“Airmow simply takes a nominal cut, with the contractor’s fee being paid via the app once the customer approves the finished work. The immediacy of payment will be a bonus because the current market average time to chase payments is 30 days,” Ismail said.

Airmow is also looking to bring on ‘lawn mowing superstars’, as Ismail called them; those interested can register and, if they pass a police check, will be brought onto the platform, with the rating system then working to highlight the best. Contractors are insured through Airmow, which has a policy with IAG.

“We give each contractor our standard operating procedure and guidelines on quality expectations and good customer service. So long as the person is providing an excellent service, they will have the money released to them by the client and they will feature in search results, we quickly separate the wheat from the chaff,” Ismail said.

Though there are a couple of big names in the lawn mowing business, Ismail said Airmow sees itself as expanding the market rather than competition for the existing players as it enables greater productivity for contractors.

Airmow is currently available in Sydney, with plans to roll the service out across Australia within 12 months.