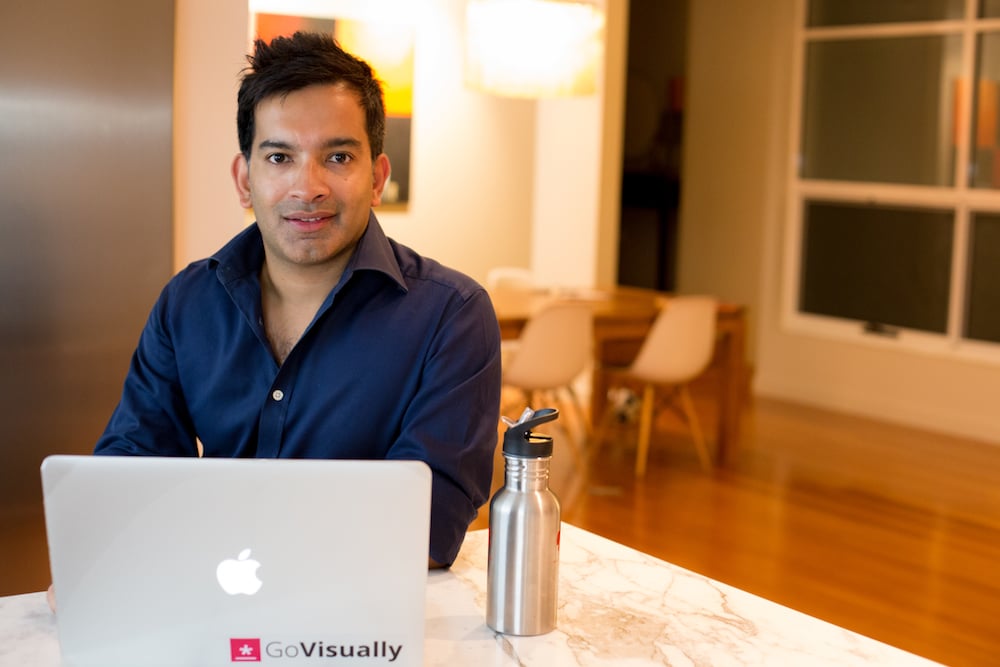 Kiran Kumar was living a cushy corporate life before he decided to take a bold leap into the unknown and become an entrepreneur. Being the son of a family who migrated from India to Australia in the 1980s, and facing the recession a decade later, the Kumar family had little other choice than to shop around aggressively to find the best price for products they wanted to purchase. But that itself was a time and energy-consuming task.

Over the years, as online shopping became mainstream, retailers went from having seasonal sales, to sales throughout the year. But it was still tricky to find the best prices on items consumers covet. While there are several tools that help with tracking prices online, they don’t provide a seamless shopping experience where consumers could simply ‘watch’ an item from any store worldwide. It was from this frustration that Kumar decided to embark on a mission to see whether he could crack the nut.

And of course, he did, along with his co-founder Ajay Mathew. The duo built a tool, under the moniker Pricify, that allows consumers to track prices of products they want from any online retailer around the world. Pricify currently supports over 700 sites – from Amazon and Asos, to high-end retailers like Net-A-Porter – while also featuring over tens of thousands of products. Built into the system is also an intelligent, self-learning feature to support new stores that emerge in the eCommerce market.

So how does Pricify work? When retailers discount or drop prices, users are instantly notified via email and Facebook alerts. While the web-based application is a great tool for tracking tagged products, it also functions as a discovery platform for finding new and exciting products.

Kumar says Pricify is “a win-win” for consumers and retailers: “Retailers like the re-marketing element of Pricify – because once a consumer has tagged an item, the regular email updates keeps the retailer’s brand front of mind and drives potential customers back to their site.”

He also stresses that Pricify is “agnostic to markets” and works with any currency, language and location.

Since its beta launch in October last year, they been driving a steady stream of users everyday and continues to see a healthy growth in traffic each month.

From the outset, Kumar and Mathew held the philosophy that if they wanted to innovate, they needed to step out of their comfort zone and bootstrap their venture. Pricify is their second startup, following GoVisually.com – a web platform helping designers and clients manage design feedback and revisions with visual collaboration tools. GoVisually.com also grew with no external funding.

Kumar says, “As founders, we’ve always believed that constraints are the best way to challenge our assumptions and discover non-traditional avenues to solve problems.”

“Bootstrapping has really challenged us to do things in a way that we wouldn’t have attempted otherwise – like growth hacking to content generation.”

He also adds that bootstrapping has allowed them to focus their time and energy on users, without being distracted by third party interference.

With growth on the horizon, the duo have their minds set on disrupting a trillion dollar market. According to eMarketer, the global eCommerce market continues to grow exponentially with global sales reaching $1.2 trillion in 2013. The US alone grew by 12.5 percent last year, with 72 percent buyer penetration. Other markets including Asia also continue to demonstrate massive growth.

“There are a growing number of services that incentivise customers via offers, and we see ourselves in this market with a unique offering,” says Kumar.

Learning from past experience, the co-founders decided to build their own team right from the get-go. Kumar says that in order to remain agile and nimble, they needed to work as “one team with a shared vision” rather than outsourcing the core product to offshore developers.

“It took us about two months to build a basic prototype as we were validating the product with real online shoppers. The only money we’ve spent has been on paying our very talented engineering team based out of Bangalore, India. The the rest has come from sweat and effort including doing all the design and UX work between the founders,” says Kumar.

They’ve spent very little on paid marketing, and have been able to generate traffic by understanding where their target customers ‘hang out’. Kumar says that last year, they discovered that Reddit had a large community of frugal shoppers.

“We jumped on the forum, started engaging with the community and saw some incredible results,” he says.

“We’ve also been building relationships with fashion and beauty bloggers to collaborate and raise awareness. As a result we discovered that a large majority of our users are of the female demographic, so we recently re-themed the website to appeal more to the female demographic. We also started developing a presence on Instagram to reach out to the fashion community.”

Pricify’s business model is fairly simple – based primarily on referral commissions, which is bringing in stable revenue at the moment, particularly from US retailers.

Once they launch officially, Kumar says they plan on implementing a subscription-based model to maximise the performance of eCommerce retailers with a multichannel incentivisation strategy.

“It’s a known fact that despite the cost and effort given by online retailers to attract new customers, just 2 to 3 percent make a purchase on their first visit, with the remaining bouncing off or abandoning the shopping cart,” he says.

“Our aim is to work with retailers to increase conversions by re-marketing to shoppers who’ve demonstrated a propensity to purchase.”

Their biggest challenges have been ones that many, if not all, startups face – staying focused, learning to set goals, and prioritising tasks.

“Not a single day goes by that isn’t challenging … Being a founder, there are a million things to do – including marketing, product development, communicating with your team, and networking with industry players, to name a few. It can be very overwhelming particularly if you are also juggling a corporate role,” says Kumar.

“The biggest lesson for me is to always remain focused on the nucleus of the problem you are trying to solve. Everything else can be a distraction.”

Other challenges for the founders have been knowing whether it’s right to stay on course or to refine the business model.

“As other bootstrapped founders can relate to, getting exposure to your target audience can be tricky and time-consuming. Paid advertising can be expensive and we really need to be careful so that each dollar spent can drive long term value to the business,” says Kumar.

Despite the challenges of running a startup, Kumar says that it also incredibly rewarding – especially when customers validate the concept.

“With any early stage startup, you get a tremendous sense of achievement and satisfaction when you hear stories from your customers that your startup is solving a genuine need and that it has added value to their lifestyle,” he says.

“We are getting great feedback from customers and lots of stories about how it’s saving them money by being able to make smarter decisions at the best price point. We recently had a very happy customer in Australia who purchased a car through carsales.com.au after he was notified it dropped in price by $4,000.”

At the moment, the founders are preparing for their official launch. They’re updating the features on the site so that it can self-track new retailers, while also working on a mobile application to make Pricify available on the go. The mobile application is scheduled to launch within the next month or two.

They also plan on introducing more features like the ability the refine the search by colour and price range, as well as better social integration. On the retail side of the spectrum, the Pricify team are prototyping a potentially powerful re-targeting platform to engage users at the right location and at the right price point to help retailers optimise conversions.

Kumar says they’re currently seeking partners, retailers, advisors and mentors to help them realise the full potential of Pricify, and take the business to the next level.

Take a tour of the site via www.pricify.com.