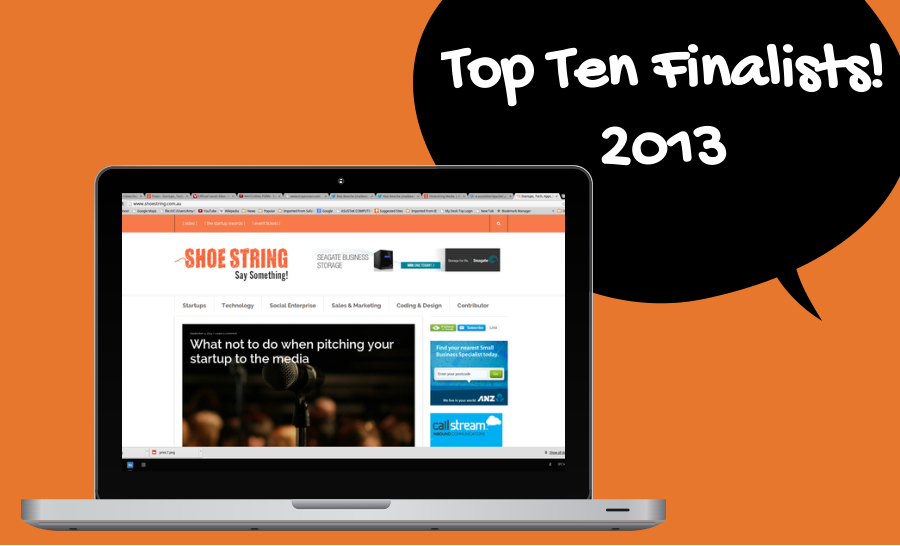 Over the last couple of months over 100 startups from all around Australia have taken the time to enter our second ever annual Startup of the Year Award, we personally think this is awesome, and can not wait to double the number next year as our publication continues to grow along with Australia’s startup scene. I imagine, choosing the top ten list out of over 100 options would not have been an easy task, we did this survey style to 100 people that have no vested interest in any of the startups on the list as so much as we insured none were founders or investors of the companies as the entries came through.

A big congratulations to our Top 10 below! – These guys will now be judged on a further criteria where they will be asked a series of questions around their business as well as pitch their companies and have these assessed by our panel of three judges. A person from the Media, a person from a well known business that helped kick off the Aussie startup space and a representative from one of our supporters of the Startup of the Year award. Once final submissions from the Top 10 have been taken and judging has concluded, the overall winner will be announced at a special ceremony as part of Startup Spring.

This Years Top 10 finalists for Startup of the Year 2013:

About: Solving the solution of vague recruitment agencies when it comes to looking for tech roles and searching for tech staff.

About: An online radio station for families and children. Disrupting commercial radio with a focused option for busy parents

About: Charging your phone whilst you are on the go. Wearable and transportable tech fashion items that charge your smartphones and tablets.

About: A new payment system that allows customers to sell seamlessly without customers having to leave their blog or website.

About: An easy way to hire developers from a customised marketplace to tweak websites at a rate of $39AUD a “tweak”

About: Allows user to create their ebooks in the cloud and publish to Amazon and the iBookstore in a single click.

About: A new cloud based software that allows businesses to eliminate time theft and accurately pay staff within minutes not days.

About: Takes mobile dating to the next level by telling users where they can hang out to find and date new people with similar interests.

About: A venture technology firm that only creates tech companies with a subscription based model.

About: Allows businesses to integrate easy to manage and use event booking portal into their website and let’s users find fun and interesting classes and course.

A massive congratulations to our Top 10 Finalists for 2013!

Grand Prize announced on Sept 26th 2013. Prizes: grand prize of the title, return flights to Silicon Valley, a tour of the Valley courtesy of 99 designs and hosting by ninefold.

Here are some facts you should know about the choosing of the top ten: