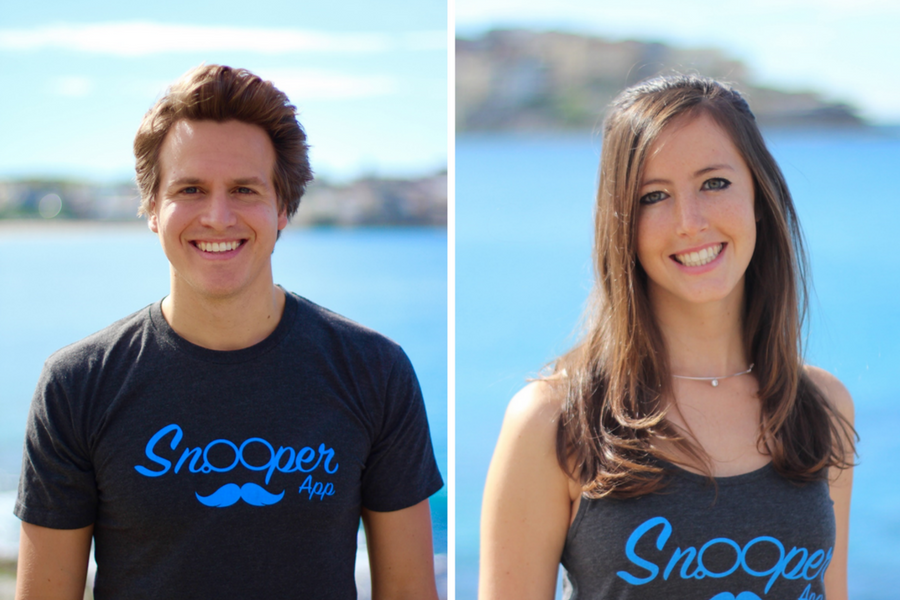 It’s not uncommon to whip out your phone at one point or another while browsing the supermarket, whether it be to send a quick text or take a Snapchat of another Arnott’s Pizza Shapes flavour that’s been butchered.

Considering almost everyone has a smartphone on them at all times – except perhaps a grandparent, that one particular hipster friend we all have, and Ed Sheeran – Sydney startup Snooper has developed an app allowing anyone to earn cash while they are shopping, filling up petrol, or having a drink at a bar.

Through this model, the startup provides brands with data on their in-store products and their performance based on the “missions” each user on the app completes. Missions typically come in the form of asking a shopper to complete an on-the-spot survey, which may include taking a picture in addition to answering a set of questions determined by the brand.

Completing a mission on the platform nets a user anywhere between $5 to $15 depending on the “difficulty” and length of the task. Funds for missions come from the brand themselves, who pay Snooper for each completed mission, before the startup hands a portion over to its users.

This “gig economy” market, as Snooper cofounder Laurie Wespes describes it, where everyday people can earn cash by using the things that they own, is one that the startup wants to break into with mobile phones.

“[It’s] this idea that by using everything you have you can make money; if you have a house you can use Airbnb and make money with it, and if you have a car, you can rent it out. For us, if you have a smartphone, then you’ll have access to this extra incentive for cash,” she said.

Comparing the revenue gain on an hourly rate beside Uber, fellow cofounder Romain Richelle said Snooper users can earn above $60 per hour, a figure which sits higher than Uber’s average income rate for drivers – though this of course depends on the type of missions and locations in which they are available.

“Missions can be really fun too. One of our missions is ‘The Heineken Mission’, [where] you visit a bar and help Heineken understand if the bartender is serving the beer in the Heineken way,” Wespes said.

“Heineken believe that if the bartender serves a beer in a specific, Heineken-developed five-step way, then you’ll enjoy the experience more, so they want to make sure that bartenders are trained around that. This means you can earn $15 for just going into a bar and having a beer.”

Richelle added, “We want [missions] to fit into people’s daily routines. So if you’re shopping, you have a mission, then when you go to a service station there’s a mission and later when you go to a bar at night and there’s another mission.”

Pushing the ‘anyone, anywhere’ idea formed the story behind how both Richelle and Wespes developed the idea for Snooper.

Previously located in Brussels, the pair were well immersed in the brand promotion space. Wespes was working at a strategic management consultant for brands where she noticed that the execution of the strategy was more important than the strategy or theory itself, and a spot where a lot of brands struggled.

Meanwhile, Richelle worked as a brand manager for L’Oréal, where he found that the company didn’t have the tools to see if their in-store campaigns were running effectively beyond brand representatives.

“My reps didn’t have much time to do it, so I ended up taking a lot of time to go in store and take photos of products and these sorts of things. I figured if I could do this on my smartphone, then the average shopper could too. We saw a huge opportunity in the Asia Pacific, so we thought we would move to Sydney to launch Snooper,” explained Richelle.

Elaborating on the issues brands face with tracking their in-store campaigns and product performances, Wespes claimed two key points, the first being the high costs involved.

“75 percent of the shoppers make their decisions at point of sale, therefore brands are investing a lot of money to make sure they’re providing the best experience in store. Unfortunately, two thirds of these investments led to negative return on investment [ROI]. Basically, there is around $400 billion spent in stores around Asia Pacific…so roughly $300 billion is wasted without a good ROI,” she said.

The other key issues surrounded store reps, who don’t have the ability to travel to every single store a product is featured in to report on them.

Wespes added that these employees are also often high-cost, and hiring only a handful means there’s a big bias involved in the data being collected.

“So why not use the shoppers themselves? It’s customer centric, it takes a low amount of time to accumulate, and it’s reliable,” she said.

Users on Snooper create their own account, before being shown a map interface of all the mission locations nearby, relating to a shelf of brand products such as alcohol, petrol, laundry products, food, and soon energy drinks.

Working in a similar space is Sydney-based startup Aglo. The startup’s app allows users to earn cash for completing missions while they’re browsing a store, a gamified process similar to Snooper.

Both Richelle and Wespes acknowledged the similarities between the apps, commenting that it was a positive thing to have a competitor in the space to validate the market and bring awareness to brands that crowdsourcing shoppers is a cheaper and more viable option.

“There are so many brands out there to use the platforms, and for our users, it means more opportunity to earn revenue. We’re happy to have Aglo with us in the industry,” said Richelle.

However, Snooper is also looking to differentiate itself from its competitor. The startup pushes a “community” vibe, running social media campaigns such as rewarding the top mission completer of the month and photo sharing contests using Snooper’s in-app photo booth feature.

“Gamification will be very important to push users to complete our missions, so we’re going to push that side,” said Richelle.