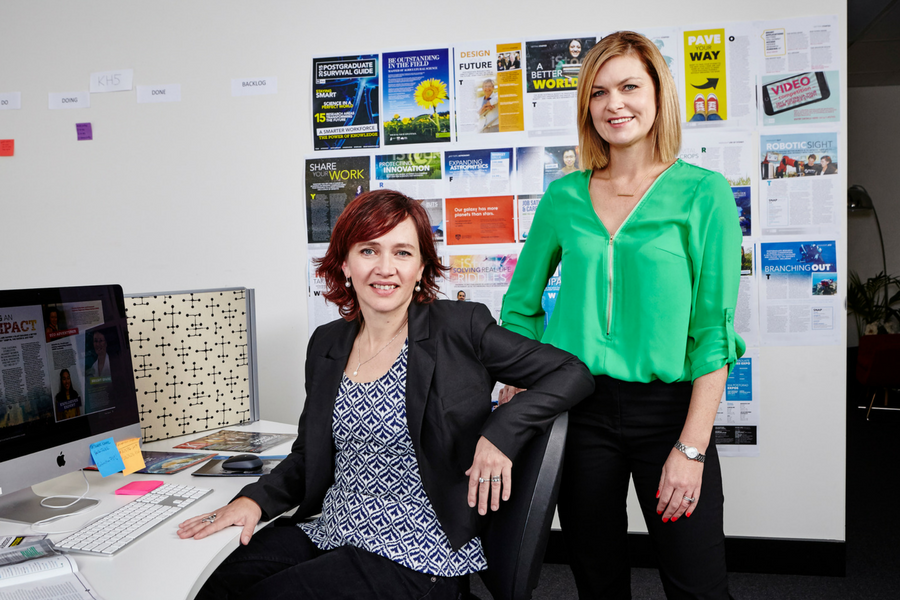 As the announcements coming out of Fairfax and News Corp have shown again over the last week, the media industry has been in a bad way for a while.

Heather Catchpole and Karen Taylor weren’t swayed by the difficulties facing the industry, though; after being made redundant from science magazine Cosmos in 2013, they decided to have a go at launching their own publishing company, Refraction Media, producing STEM-focused content.

“We both felt like an amazing opportunity was presenting itself to us and we would be crazy to ignore it. We had confidence in our abilities because we’d been doing the exact job as a team for two years where we’d worked for a science magazine,” Taylor explained.

The pair were similarly confident with their choice of focus, with their background in science publishing – and the “mountain of contacts and supporters” that came with it – setting them in good stead. Beyond that, they saw a real need for STEM content.

“We had seen the reports that showed a massive gap between STEM skills and employer demand. We believed that a big part of the problem was around perceptions and stereotypes around STEM careers. Kids in school imagined scientists in the white lab coat, glasses and facial hair,” Taylor said.

“STEM had an image problem and we believed storytelling and connecting with audiences is a great way to transform its image. We also knew that STEM skills were increasingly important as a business strategy for organisations.”

The company produces a variety of magazines, websites, posters, teaching guides, and even apps to encourage students into STEM. Its cornerstone publications are the Careers with STEM magazines, a series of career guides produced in partnership with Google for high schools.

The series looks at specific niches within STEM with titles including Careers with Code, Careers with Engineering, and Careers with Science, profiling professionals to showcase the different types of jobs in these sectors.

It all kicked off with the pair bringing on their first client within a couple of weeks of coming up with the idea with Refraction; in fact, they had yet to open a business bank account. They had worked with the client at their old job, but with the freedom that comes with running your own company, were able to pitch “some wonderfully creative concepts”.

“I think we were successful because we knew the topic, we were familiar with the way the organisation worked and we were willing to put ourselves in the centre of the production process while driving the creative process. We were ambitious and keen; we grabbed the opportunity with both hands,” Taylor explained.

The growth of Refraction Media has been helped along by the increased interest in STEM over the last few years as the realisation dawns that the vast majority of Australians are unequipped for the jobs of the future. According to statistics released by PwC in 2015, around 75 percent of fast-growing occupations require STEM skills but only 16 percent of high school graduates pursue degrees in STEM disciplines.

“Stakeholders have realised that it makes business sense to connect with groups that have previously been underrepresented in STEM, like women and cultural minorities, and our messaging has always been about driving diversity in STEM,” Taylor said.

Refraction is working with organisations including Commonwealth Bank, Telstra, and Atlassian, companies Taylor said are keen to be part of the solution and use the publisher’s platforms to connect with girls.

“I think the really progressive tech companies are being quite active in this space. I think the key is that there should be a focus on collective impact. At the end of the day, we are trying to create a larger talent pool. We are trying to encourage companies to focus collectively to make a better impact on diversity, rather than having individual programs scattered around,” she said.

To reach a wider audience via a central platform, Refraction has also developed CareerswithSTEM, a website bringing together stories from across corporate Australia, government, higher education, and startups to inspire readers and show the breadth of opportunity in STEM.

“At Refraction Media, we want to smash those gender and cultural stereotypes and show secondary students, and particularly young women, that working in computer science does not mean you’ll be in a basement coding in the dark,” Taylor said.

To demonstrate this, the cofounders ensure that there is a minimum of 50 percent female representation in each publication produced by the company, going with the idea that you can’t be what you can’t see.

“We want to challenge the perceptions about tech careers and highlight the unexpected outcomes. In reality, there is a lot of flexibility around your work conditions if you’re working in tech, so it is particularly well-suited to women who may have to combine other caring needs, for example,” Taylor said.

The company last year expanded the Australian edition of Careers with Code to include New Zealand with the support of Google, delivering 50 copies to every school across Australia and New Zealand.

Work in the US is also in the pipeline following the production of a pilot edition of Careers with Code for the US last year, while Catchpole and Taylor also hope to expand to Asia.