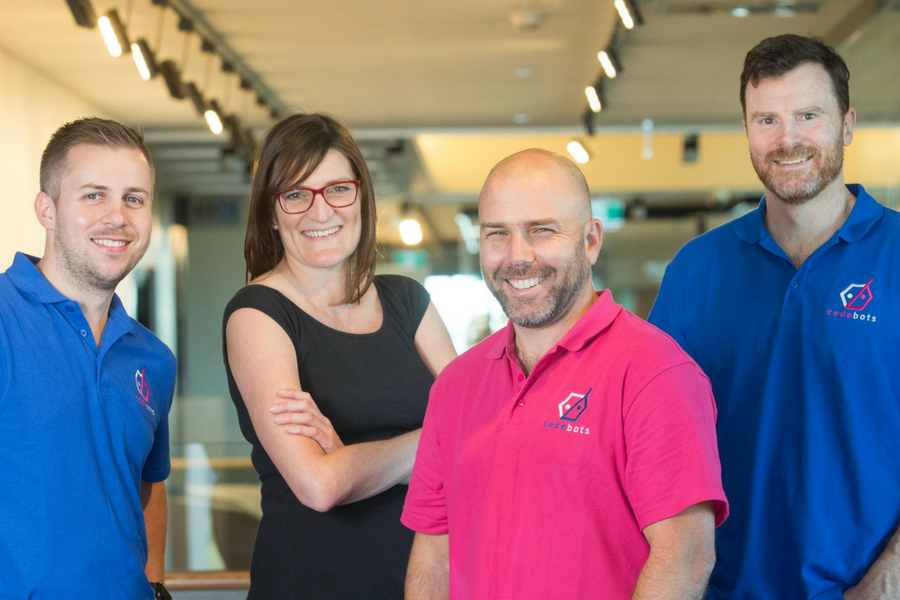 For those without the tech knowhow, developing an app has traditionally been a costly, time-consuming ordeal, with many falling at the first hurdle: finding the right developer.

Cofounded by Dr Eban Escott, Indi Tansey, Matt Francis, and David Burkett, Queensland startup Codebots aims to open up app development to the non-techies among us, creating an app building tool for non-developers.

It doesn’t replace developers, Tansey noted, but rather looks to encourage those less technical to create the apps they need, without feeling limited by their tech knowhow or lack thereof.

“The platform enables anyone to build and manage software with the help of AI-powered codebots, or code-writing robots. You decide what you want your app to be able to do, you give a codebot instructions, and it writes more than 90 percent of the codebase that a human would typically have to write,” she explained.

“The aim of the platform was always to make technology more accessible for everyone. We saw that technology was a real barrier to so many people who want to solve real problems that are going on right now. We don’t think that everyone should have to learn to code just to be able to build an app, so we designed a product that lowers the barrier to entry so more people can execute on their ideas.”

The technology underpinning the platform has come out of Dr Escott’s PhD at the University of Queensland, with the journey to commercialisation helped along by the iLab accelerator.

So how does the tech work?

“The current architecture for each codebot is a standard EMF architecture. We define a meta-model using EMF and then create a number of models using this meta-model. The models are transformed into the target application. The target application is both the development target, deployed into beta/production, and the testing target, deployed in continuous integration and used for UATs,” Tansey explained.

“We also leverage open-source technology. Our most popular bot, Lampbot, writes to a LAMP – linux, apache, MySql and Php – stack.

For those who had that techy explanation go over their heads, Codebots works by having a user sign up, set up team members and projects, and begin to describe the project they want to create. From here they set up user personas and create epics and user stories for the project that determine what will be done and by who.

They then use a drag and drop interface – called the diagram editor – to construct the application: here they are drawing up the UX design and database schematic. The next step is testing, with users taken to the scenario builder where they choose the tests they want to run on their project.

“Then comes what we call the ‘fireworks’ moment where the codebot writes thousands of lines of code on your behalf,” Tansey said.

“Your codebot will build your application as you watch, with each part of the database and connective flow of the UX coming to life.”

As the community lead for the startup, Tansey said the team has gone through a number of iterations in terms of how it markets and describes the platform.

“A big breakthrough was when we landed on the term ‘codebots’. We had been talking about software bots for a long time and it helped the concept click in the minds of our customers. The idea of humans being enabled by bots working on their behalf is an important part of our story and development as a company,” she said.

This also helped the company narrow its focus when it comes to its target market. Initially, she said, Codebots was trying to target everyone who wanted to build software – “almost impossible when you’re building a marketing funnel on a bootstrapped startup budget,” she said.

With this in mind, the startup is looking to target medium-sized businesses “who have an ecosystem of outdated or unscalable software”.

Tansey said, “We want to make it easy for them to quickly build apps that streamline their processes, unlock their data and find their competitive edge.”

The platform has already been used for more than 30 real world software projects, with Codebots working with the likes of startups through to government departments.

Codebots will work along a freemium model, with premium features available with a subscription. It will also charge a one-off deployment fee for projects.

Beyond the building of apps, the startup is also launching Codebots Academy to teach users both the basics of code and app design and how to make the most of its platform.

There are a number of businesses in the low-code platform market that look to automate the code writing process, Tansey admitted, but with the market predicted to grow by nine times to $22 billion in the next four years, there is space to play with.

Identifying Outsystems and Mendix as its two key competitors, Tansey believes there are two big differences between Codebots and the others.

“Both competitors require their users to install software locally on their computers. Codebots is 100 percent cloud-based and available online through a browser and a mobile-app. Secondly, Codebots uses artificial intelligence to write code. No other competitors use AI in this context.”

Having taken part in the Myriad Festival in Brisbane last week, the startup anticipates a public launch in the third quarter of 2018; until then, users can go through the Codebots Academy and upskill before the full platform is live.