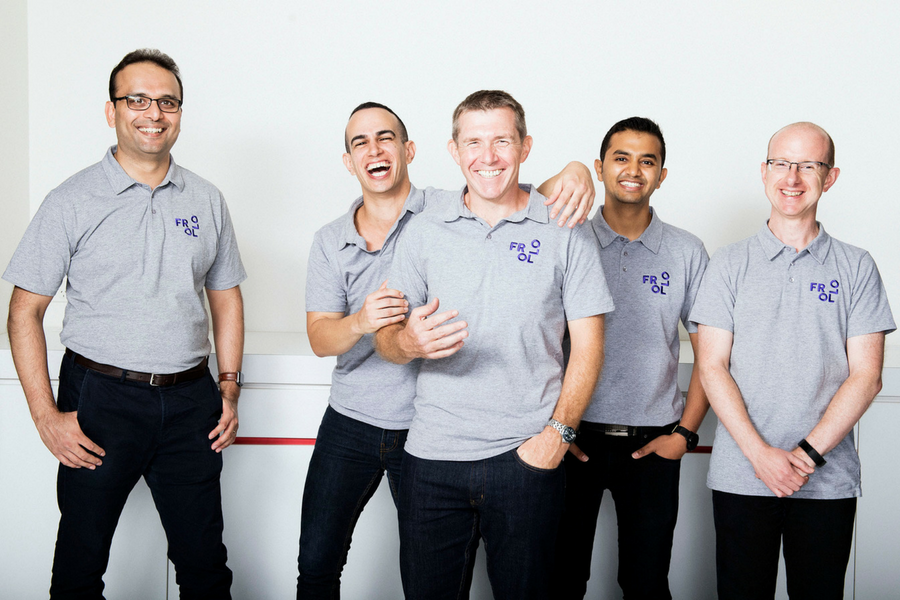 Personal finance and budgeting apps are a dime a dozen but ask a group of friends or colleagues which they use and you will likely end up with a list of half a dozen of different names, from Pocketbook to You Need A Budget and everything in between.

A new addition to the market is Sydney-based Frollo, founded by Gareth Gumbley, Edd Smith, and Nick Dawson. Beyond helping users see where their money is going (not exactly that useful if you know your money is mainly going towards coffee and takeout), Frollo also looks to help users achieve their savings or other money goals and learn better money habits.

The issue of financial literacy – or lack thereof – is one that Gumbley is particularly keen to address. A 2015 report from S&P ranked Australia ninth among English speaking countries for its financial literacy, with 64 percent of adults deemed financially literate.

The 2018 Financial Wellbeing report from ANZ, meanwhile, put Australia’s financial wellbeing score at 59 out of 100, categorised as ‘doing ok’. However, 23 percent of respondents, representing around 4.4 million people, are just getting by when it comes to their finances, while 13 percent, or 2.3 million, are struggling.

“Kids are required to grapple with complex math subjects in school, and yet the simple concepts behind budgeting and financial planning are overlooked. It’s no wonder Australians have so much difficulty balancing the books later in life,” Gumbley said.

“While there’s a wealth of information available on the internet around financial planning and debt management, it’s either generic, in which case end users have to figure out how that information may or may not apply to their specific financial situation, or geared towards recommending a particular company’s products or services.”

Frollo aims to solve this problem by giving users personalised information around their finances, while also connecting them to a wider community so they don’t feel alone through ‘community challenges’.

Gumbley said Frollo currently has “tens of thousands of users tracking billions of dollars in spend and investments”, with the most active users aged between 18 and 34 and women “slightly more engaged” than men.

A portion of these users are coming from Frollo’s white label offering, which sees the app branded for financial institutions and offered to their users.

“Banks, lenders, and other financial institutions are currently at a crossroads when it comes to customer acquisition, retention and engagement. The old way of doing business – where companies were very transactional when it came to customer interaction – don’t work anymore,” Gumley explained.

“Increasingly, end users are looking for companies who make the extra effort, who show that they care about their customers, and white labelling apps like Frollo are an easy way for them to engage with customers on a deeper level and engender loyalty.”

Gumley believes the app can also help clients make data-driven marketing decisions, such as sending users targeted offers depending on their behaviour, goals, and financial situation.

Going down the white label route rather than charging consumers for the app was an important decision, Gumley said, which was made to reflect the reason behind his founding of Frollo.

“Our core ethos is around helping our users save money, so charging them to use the app when so many other apps are free doesn’t make sense,” he said.

“Our mission is to help boost financial literacy with as many people as possible, and in order to do that, we need to make the app as accessible as possible. The opportunity to help Australians get ahead is significant, and we believe we can build a scalable business without ever charging for our app.”

Beyond the usual tracking of a user’s money and where it’s going, a key component to Frollo is its community aspect.

The community challenges came out of the company’s market research, which Gumbley explained found people were interested in how others like them were getting ahead in their finances.

“This feature enables users to partake in financial challenges against other Frollo users, such as opting for public transport for a month instead of using Uber, or eating at home instead of eating out,” he said.

According to Gumbley, the app’s top two trending challenges, ‘Dinner at home’ and ‘Grocery bash’, have a completion rate of 75 percent.

It’s this community aspect in part that Gumbley believes helps set it apart from other personal finance apps on the market. The community, he said, “recognises that changing behaviour is often easier when you can share the experience with other, like-minded people”.

The startup hopes to bring on 100,000 users within the next 12 months and add more banking partners to its roster of white label clients.