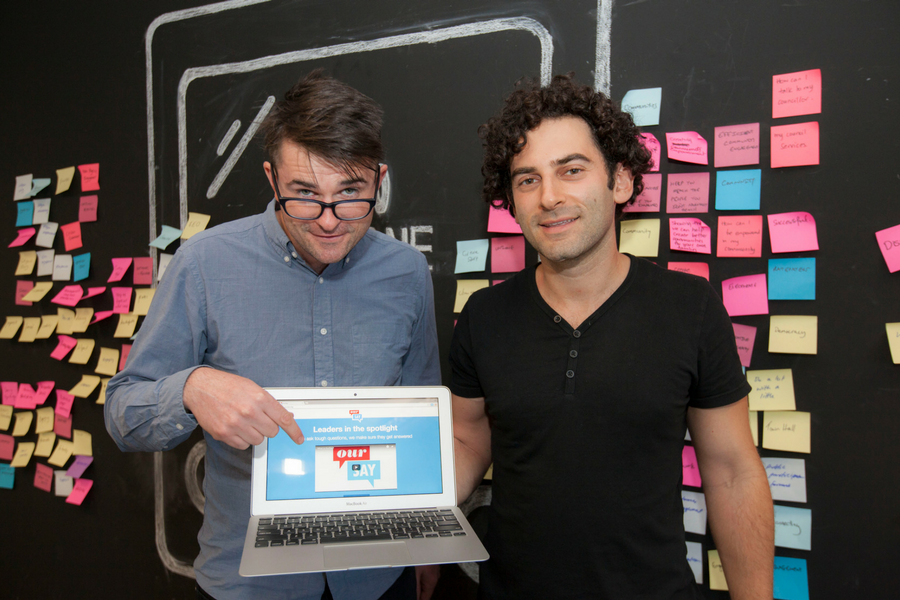 Between manipulated voting numbers, shady Russian intervention and rumours of bribery, last year’s US Presidential election highlighted the fundamental need for transparency within a democracy.

Regardless of where someone stands when discussing the new President, one can surely agree that the entire election process has triggered the global public to rethink the importance of honesty and communication within not only governments, but large corporates and organisations too.

OurSay is a Melbourne-based startup working to facilitate transparency and communication between organisations and civilians using an online platform.

Acting as a middleman, the startup allows clients to form discussion forums and targeted surveys which are then shared with a selected audience.

Using a management dashboard, a client is then able to visualise the numerical and written data received to help inform their decisions.

Describing it as a “self-serve” platform for democracy and public engagement, OurSay cofounders Eyal Halamish and Matt Gordon said, “The platform is supported by a team of activists, ex-public servants and technologists to help customers become more transparent, faithful and comprehensive in the way they engage communities.”

The business emerged in 2010 after the founders tested the concept of an unbiased discussion and analytical platform with media at local, state and federal levels, as well as an unnamed Prime Minister.

As to where the idea for OurSay came from, Gordon andHalamish attributed it to a decline in government trust over the last ten years.

“According to the Edelman Trust Barometer, a global, annual piece of research looking into trust across a number of sectors each year, trust in public institutions is at an all time low. In particular, people feel governments have stopped listening and valuing community feedback,” said Halamish.

Halamish added that it’s often difficult for governments to hear from people beyond the “usual suspects”, while the public often prefers to engage with governments using an independent moderator.

“This is apparent in both offline and online contexts. Having an independent moderator like OurSay builds civilian trust in the public engagement process,” he said.

Through the platform, users are able to create a forum discussion post in addition to surveys which are based on a particular topic they want to gain insight on.

The founders said that although governments are a focus, OurSay also sources customers from banking, finance, education, health and non-government organisations.

“Most of our customers are community engagement experts, communications staff or policy wonks in Local and State Government who need to consult with the public,” explained Halamish and Gordon.

With a substantial variety of industries on board, the cofounders added that customers are looking for insights on everything from strenuous planning decisions through to local potholes that need mending.

“Recently we helped the Victorian state government allocate $10M in drought-relief funding to communities in the North Western region,” said Halamish and Gordon.

When a user creates a forum post, they’re able to get a link to share with the public using either email, social media or website embedment. When a discussion begins, OurSay moderates the forum to help ensure fairness, respect and “higher credibility” to the client.

When survey and forum responses are received, the platform churns the data and visualises it on an online dashboard.

Aside from the expected ‘total number’ data counters, OurSay presents a shelf of other useful information too, including the location of each respondent on a map interface.

Data is visualised on the platform in graphs, and can be exported to an Excel document to keep locally or stored on the cloud for future use.

The cofounders explained that with both numerical and written data, the organisation is able to gain a comprehensive insight of the audience or community they serve – clients can then use this insight to make informed and logical decisions that reflect the data.

At the end of an engagement process, respondents are able to receive email updating them on how their contribution has been used by the client organisation.

“Members of the public wishing to make a contribution provide some basic demographics and an email address, so we can keep them in the loop with how their feedback has made a difference,” said Halamish and Gordon.

The business didn’t specify the exact cost of using the platform, explaining that OurSay is opting for a cheaper and lighter touch model that is trending in the software as a service market.

With a pre-seed round completed for the business last year from both institutional and angel investor contributions, Halamish said the startup is now looking to conduct a seed round in the near future.

Moving forward, the cofounders said the business will continue to build out its features so OurSay can capture the “imagination” of the market.