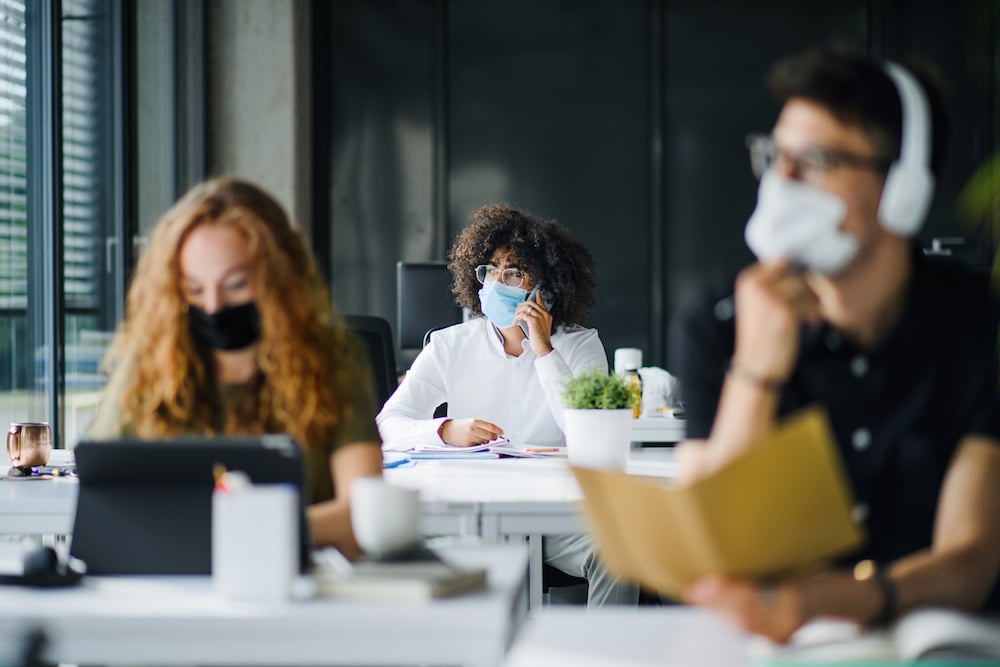 Last night I dreamt I was back in the office for the first time. Our long communal tables in the kitchen were gone.

My desk was surrounded on all sides by plexiglass – including overhead, which, for a guy my height, means stooped shoulders and a future riddled with chiropractic appointments.

Nobody talked to each other except over Slack. The smell of disinfectant was inescapable. I couldn’t wait to go back home. Or at least, wake up.

Fortunately, I doubt the future that awaits us is as dystopian as all that. Things will be different for sure, and we’ll all be a bit anxious about co-mingling with that many people from other households. Still, it’ll be refreshing to see each other in person again, even if we have to skip the hugs and high-fives.

But then what? After the initial thrill of being out of the house wears off, we have to get down to the business of rebuilding our office cultures, taking into account the myriad lessons we’ve learned over the past months.

Of course, there will be some companies that will go back to their old (often broken) ways as if nothing ever happened. They’re missing a massive opportunity. But the companies who embrace this chance to change will, I predict, be buoyed by a wave of post-traumatic growth.’

Authenticity will be accepted and appreciated

Authenticity is in. It started trending the moment your toddler made their first unscheduled cameo appearance on Zoom, and the world *gasp!* didn’t end. It picked up speed when you noticed the stack of breakfast dishes on the counter behind your boss during a 1-on-1, and thought no less of them for it.

Then, when we saw elected officials tear up on camera, that sealed the deal. We’re all human. Fallible, imperfect, beautiful humans. And we don’t care who knows it.

While I don’t believe authenticity spells an end to decorum and professionalism, I do believe the way we show up at work is going to change for the better.

On the surface, it probably means more relaxed dress codes at the office (as it turns out, our brains are still perfectly functional when we’re not wearing a suit). But the real difference will be in how we show up energetically and the extent to which we’re willing to open up.

Already, we feel less pressure to present a brave face when we’re feeling anxious or sad. I think that will follow us back to the office. Because being real is healthy. It even feels good!

And if we’ve really internalised the lessons of the pandemic, we’ll notice our teammates and ourselves be more candid about whether our projects are on track or achieved the results we’d hoped for. Bad news doesn’t go away when you downplay it.

The best way forward is through transparency, pragmatism, and a plan of action.

Remote work will be normalised (finally)

If I had a dollar for every C-level executive who has told me remote work “couldn’t be done” at their company, I could have retired years ago. Now we know that what they really meant was “eh, I don’t really feel like giving it a try”. From the looks of it, however, many of them kept an open mind through all this and have seen the light.

In fact, 74% of CFOs surveyed by Gartner say at least some positions at their company will remain remote full-time. Others say they’ll allow their people to work from home a couple of days a week if they prefer.

In part, this is just a practical matter. Our offices weren’t designed for physical distancing – quite the opposite, in fact. The easiest way to adapt our new work style to our old spaces is to have fewer bodies in the office at once, whether that means transitioning some people to be fully remote or staggering our schedules.

But it’s also true that company leaders have listened to their people explain what a relief it is not to have a commute and how much easier it is to get uninterrupted time to focus at home (school-aged children notwithstanding).

They’ve experienced these benefits themselves, which has helped them build more empathy for those who find traditional offices challenging.

And guess what? We’ve made huge strides over the past few months when it comes to virtual collaboration. We’re more comfortable with video conferencing than ever before (although Zoom fatigue is now a thing) and now use it for everything from impromptu check-ins to project kick-offs and retrospectives.

We’ve gotten into the habit of sharing information over chat so anyone can see it. Even the social aspects of work have successfully gone remote with virtual team lunches and hobby-themed chat rooms that scratch our itch for casual banter. We can do this, people. Crisis or no crisis.

Remote collaboration practices will follow us back to the office

Don’t stop now – we’re on a roll! We’ve learned that using digital collaboration tools like team chat, project trackers, and intranets mean we can access our work from anywhere. It’s handy, it’s more inclusive, and it’s going to remain part of the way we work going forward. Truly, this experience has lit a fire under every company that was lagging on the digital transformation front (as much as I hate that term).

Here too, part of the reason is that we’ve just had a collective epiphany around better ways of working, while part of it is that we’ll be living in a remote/co-located hybrid world. And even on days the whole team is in the office, meetings will still take place on Zoom because we can’t cram ourselves into conference rooms like we used to.

We’re already seeing some evidence of remote practices persisting as Chinese office buildings re-open, with the usage of team chat tools reportedly holding steady while workers navigate their new normal in the office.

Tools like chat and video help work flow smoothly no matter where your desk is. A year ago, it was common to plan meetings around people’s travel schedules because we couldn’t be bothered to deal with video conferencing, even though waiting delayed the whole project. Now, we barely think twice about hopping on Zoom for five minutes to bounce ideas off each other.

Oh, and business travel in general? Doesn’t take a genius to figure out there’ll be less of that.

The other epiphany that will follow us back to the office is the realisation (well, confirmation) that always-on culture is toxic. Now that we’ve all had a chance to see what it’s like when there’s no physical separation between work and home, we viscerally understand the need for mental separation.

Even people who prefer to integrate their work and personal lives need time outside of work to recharge and avoid burning out.

Everybody’s mental and emotional health has been taxed. And although most of us are acclimating somewhat, this additional strain will be with us for some time to come. We need to keep checking in on each other and keep being honest about how we’re doing because it’s still ok to not be ok.

Managers need to keep encouraging (and modeling!) self-care, even when taking care of yourself means taking some time off.

Colleagues need to keep connecting on a personal level to build a sense of community and support. And we all need to keep giving others the benefit of the doubt because every single person we work with is quietly fighting battles we know nothing about. That goes double for those who struggled with mental health issues even before this crisis began.

Business strategy will focus on adaptability

Companies are feeling skittish about over-indexing on ideas that haven’t been proven out yet – both because of the economic landscape and because we’ve just learned how quickly things can change and wipe away our well-laid plans. For businesses that haven’t yet adopted capital-A Agile, the past few months have been an express-lane introduction to small-a agility.

Companies will shift away from multi-year “big bets” and lean more on experimentation and iteration so they can change course quickly. Indeed, as Atlassian execs prepare for FY21, their approach is to plan for “a series of four quarters” rather than planning for a full year.

Both leaders and individual contributors will need to ruthlessly prioritize to make sure they take on the projects that will have the biggest impact. Weed out the busy-work that only provides the illusion of having accomplished something. And feedback, both top-down and bottom-up, will become more frequent.

That’s because the fastest and surest way to know whether what you’re doing is effective is simply to ask.

A people-first approach that includes asking and listening and responding accordingly is the best way to achieve viable, relevant products and internal policies that can evolve as situations change. Because your business is only as effective and resilient as your people are.