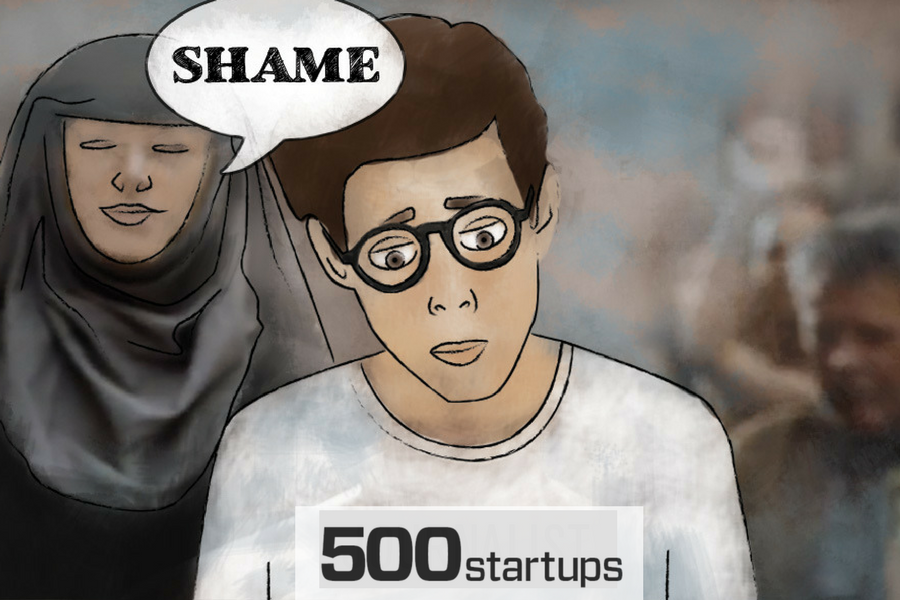 This opinion piece covers issues such as sexual harassment which could be triggering for some readers. If you or someone you know need to talk to someone there are number of services you can call right now, including Lifeline on 13 11 14.

Sexual Harassment is a criminal act in Australia – it is as simple as that. Learn more about what constitutes acceptable behaviour in the workplace by visiting knowtheline.humanrights.gov.au

There are so many layers to this onion, that is why it has taken a few days for me to issue a formal response to the events within the startup ecosystem – in particular those involving firm 500 Startups, government-backed body LaunchVic, and the long-overdue need for a conversation about abuse of power and perceived status within the tech ecosystem.

As I write this, my whole team and I have just retired for the evening to our motel rooms in Dubbo, where we are engaging in activities tomorrow for the Australia Post Regional Pitchfest and our regional startup initiative Silicon Paddock. The drive down here allowed us to have some quality discussion about equality and safety within the tech sector and indeed all industries.

I feel that to be taken seriously as a publication by those in the startup ecosystem, we should be more proactive in helping individuals that would like to share their stories do so and be more proactive in utilising our reach and platform to have in-depth and engaging discussions about important subjects via a range of mediums such as Facebook live, podcasts, and more. I will come back to this particular point in a moment – I would like to share my thoughts on the events of the last week first.

It takes a brave journalist to publish a story that calls a powerful person or company out on their behaviour; in addition to that, as the owner of a media platform it takes some serious balls to give the approval for that journalist to press publish on such a story.

I admit that there have been a number of instances since 2012 where I have personally chosen to not break a story or pursue an accusation because powerful people have money and means and I didn’t have the street credibility nor the finances to protect myself or this publication.

While it may sound like a reasonable business decision, it also meant that I was neglecting the very reason I started the platform in the first place – to be that trusted source of information and commentary about the state of play for the startup industry across Australia and New Zealand.

Because that is my pursuit as the founder of Startup Daily, I feel that any opinion given about the events of the last week should first of all acknowledge journalist and founder of Pando.com, Sarah Lacy.

Her November 2014 article calling out the company Uber, its CEO Travis Kalanick, and key members of its executive team about the alleged smear campaign they were planning against her because of her critical reporting about themselves and Uber was a pivotal media moment that inspired a lot more individuals to call out unacceptable behaviour in the tech industry, and encouraged more journalists and media entrepreneurs to see the way silence enables a damaging culture to not only exist, but thrive.

That article was published over two years ago – that is two years worth of consistent, additional bad conduct, including the sexual harassment of Uber engineer Susan Fowler, which eventually led to some kind of formal reprimand and a resignation.

It was only last week that Lacy, Fowler, and many other women were able to feel some kind of formal acknowledgement of their experience with Uber and members of its executive team.

How fucked it is that women in tech have to fight so hard to, at the bare minimum, have the way they felt during an interaction deemed valid, let alone addressed.

The resignation of Kalanick as CEO of Uber last week provided the perfect foundation upon which journalists from other publications like The New York Times could build upon what was already a relevant and international conversation about abuse of women in the tech industry.

In doing so a number of other men in the venture capital space were called out for their past treatment of women, including 500 Startups cofounder Dave McClure.

500 Startups recently launched in Australia, a move which included a subsidy of $2.5 million from industry body LaunchVic.

Given that LaunchVic sits under the banner of being a state government initiative and that McClure was literally just in Melbourne formally opening the 500 Startups local base of operations and being all chum-town with Victorian Minister of Innovation, Phillip Dalidakis, having McClure’s name appear in that New York Times article should have – and certainly did – raise concerns.

Both the Minister and LaunchVic issued formal statements distancing themselves from McClure and calling for a formal explanation to be given by 500 Startups about the failure to disclose the details of an internal investigation related to McClure.

An investigation we now know was about his sexual harassment of at least two female founders that have been through the 500 Startups program, Elizabeth Yin and Cheryl Yeoh, who wrote a blog post yesterday about her experience three years ago with McClure.

I don’t think I have to point out the obvious here – this #BroLash has been a long time coming. Thanks to brave women in the Australian startup ecosystem like Annie Parker, Atlanta Daniels, Claudia Barriga-Larriviere, Jessica Glenn, Jo Burston, Claire Porter, Anne Marie Elias and many, many others who regularly and routinely call out “bro-like” behaviours and shortcomings of our local tech communities publicly.

We need more of that so that we get less of the former existing.

Is $2.5 million the going rate for deceptive behaviour these days?

I do not for one second envy the weeks and months ahead of 500 Startups CEO Christine Tsai. There is a business to save that, despite McClure’s behaviour, has a proven track record of producing successful startup companies.

Tsai, in addition to keeping the business alive and growing, would be having many uncomfortable discussions with various internal and external stakeholders right now – I think it would be safe to assume that LaunchVic is one of those conversations.

Although Minister Dalidakis has issued a statement saying that the Victorian Government entered a deal with an organisation, not just one man – in reference to McClure – the fact is that the organisation – 500 Startups – began its relationship with LaunchVic with an act of deception.

Deceptive conduct like sexual assault is also a crime; the circumstances as to the thinking behind the decision Tsai made here is irrelevant. At the end of the day, she has made a conscious choice to engage in or be complicit to deceptive behaviour taking place for what I am assuming is reputation management surrounding the Australian launch.

That backfired. Now one of two things needs to happen.

LaunchVic has to break ties with 500 Startups, pull the $2.5 million subsidy, and take a stance against unethical behaviour in general, otherwise quite frankly the organisation is full of shit when it comes to preaching about such things in the startup ecosystem.

Or, Tsai can get ahead of the situation and return or reject the $2.5 million subsidy and use 500 Startups’ own finances and resources to demonstrate the firms commitment to becoming a positive player in the Australian startup ecosystem.

Christine, you started your June 30 blog post with the sentence “Be the change you wish to see in the world” and stated that it is the advice you give to young founders that seek you out.

Thousands of startup founders all over Australia are now watching you – what is it that you wish them to see?