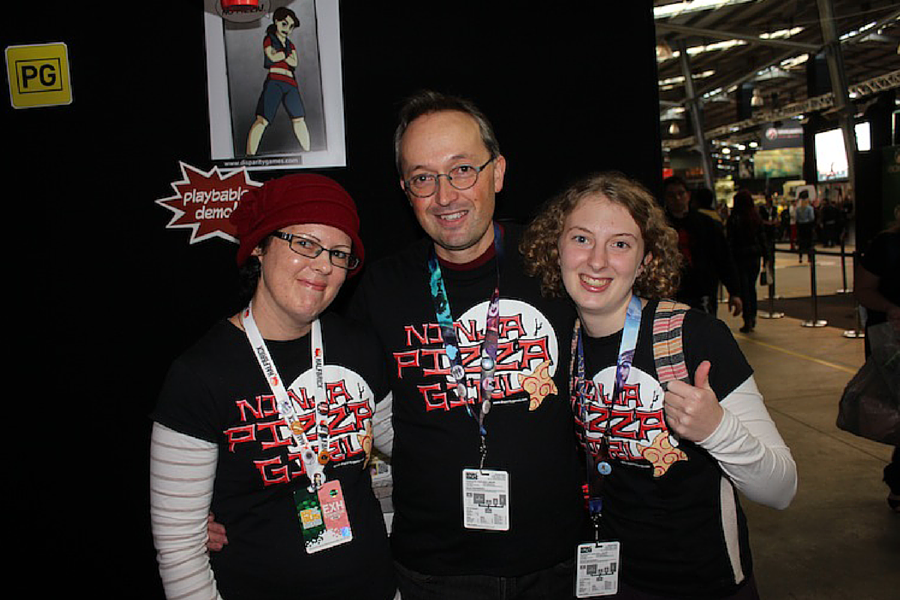 One of the big criticisms of popular video games is that they promote violence or materialism and aren’t doing us that much good. But of course, like in most other industries, there are groups creating niche products looking to make a positive impact. One such group is Noosa-based game development company Disparity Games, which has launched a new title hoping to help combat bullying.

Founded by husband and wife team Jason and Nicole Stark in 2011, Disparity Games is focused on creating games and apps that promote social good. Its first title, Run Fatty Run, made it to the top of the Australian App Store charts, and the company was commissioned by Northern Territory Libraries to create an app to help facilitate communication between English speaking and non-English speaking Indigenous people of Groote Eylandt, an island off northeastern Australia.

Now, with its new title Ninja Pizza Girl, the team has turned to the issue of teenage bullying. The game, aimed at people who have been bullied, who have bullied, or who have witnessed bullying sometime in their lives, sees players go on a journey with Gemma, a sixteen year old girl who is ‘trying to keep her dreams alive in the face of the most merciless enemies known to any teenage girl: other teenagers.’

“I think if you ground your ideas in reality and properly listen to the world around you, you can’t help but create things for the social good. In our case it was listening to our daughters and telling the story of their struggles that led to Ninja Pizza Girl,” Stark said.

“My eldest daughter used to work as a pizza delivery girl and do Kung Fu lessons. We used to joke that she was our Ninja Pizza Girl. The idea stuck and eventually became a videogame based on her and her sister’s experiences growing up.”

Both the Starks worked in the AAA games industry before spinning off into Disparity Games, where their four daughters now help out every so often. Any startup employee will say working long hours in such close proximity to a small team can see people easily get on each other’s nerves, but how is it working with five family members?

“It took us a while to get used to but now we’d happily say that working as a family is awesome. We spent a lot of years working long hours in the games industry. To be able to go from that to being an active part of our children’s lives and for them to be a big part of our work lives – it’s a dream come true,” Stark said.

The team launched Ninja Pizza Girl on Kickstarter mid-2014 to fund its development. It quickly took off, raising almost $40,000 from over 1404 backers.

“We felt that Ninja Pizza Girl’s relevant social themes made a perfect fit for Kickstarter. We weren’t making a typical video game but we knew that for some people out there, Ninja Pizza Girl was exactly what they wanted to see. We were expecting to meet our goal, which we did. What we weren’t expecting was the tremendous outpouring of support from an absolutely amazing crowd of people. It was incredibly humbling and really set in our minds the determination to make something deserving of that support,” Stark said.

The popularity of the game – it was called ‘Summer 2015’s Most Pleasant Surprise’ by hardcoregamer.com – has been both a blessing and a curse. The strength of the game’s message meant that people requested that it be made available on their gaming platform of choice. As a result development of the game, which was originally slated for full release last March, has taken an extra six months. The team has also been making appearances at gaming conventions around the world, with Ninja Pizza Girl also a finalist in the Serious Games Challenge at this year’s SimTecT (Simulation Technology and Training Conference) in Adelaide.

“Showcasing the game internationally has been exhausting and hard and inspirational beyond words. It was amazing to see the game resonate with such a broad spectrum of people. From kids to grandmothers, I think everyone has felt bullied at some point in their lives. It’s easy to get used to big scary monsters and zombies in video games but to have the enemies laugh and call you a jerk – that provokes a very real response every time.”

Ninja Pizza Girl is currently available on Steam for Windows, Mac, and Linux, with releases for other devices to come next year.