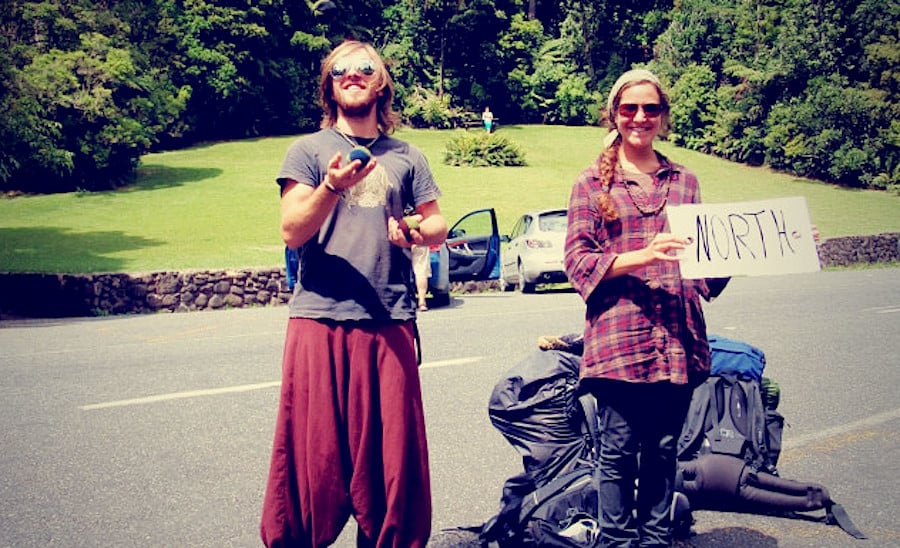 Roaming the globe can be a lonely journey when you don’t have a companion to travel with. Even today, backpackers tend to flock to outdated forums to find travel buddies, or just resort to flying solo using good ol’ Facebook,Twitter and Instagram for travel advice throughout their journeys. The issue remains: hunting down like-minded adventurers to connect with is a challenge, and apps that are currently available seem to target people who are interested in ‘hooking up’.

A new social network, Backpackr, is changing the scene and rapidly gaining traction – with 1,000 users gained in its first five days alone, and several investment proposals.

Launched in April this year, Backpackr is a mobile app that backpackers can use to find travel companions, get travel advice, share itineraries and keep track of their destinations using digital stamps.

If a backpacker is feeling a little isolated in an unknown town, they can open up the app, enter the ‘common room’ to see other users nearby their location, view their profile, arrange a meet-up and journey with them. There is also a feature that matches users up with others that have similar travel plans. Each user gets a “virtual passport” in which they collect stamps for each country they visit and for certain achievements.

The founders of Backpackr are backpackers themselves – Australian-born Matt Dowling and London-born Brent Swallowell. They shared the same vision, but had never met in person until this startup idea brought them together.

Dowling explained that the idea for Backpackr popped into his mind after a debacle in London, England. At the time, he was 19, scared and alone. He read negative reviews of a particular hostel in the region, where people complained about how they couldn’t sleep because of all the party-hardy backpackers partying around them. Dowling wasn’t put off by those reviews; in fact, he was immediately compelled to check into that hostel.

“These complaints resulted in a very strong interest to go there straight away, however upon arrival I found myself alone in an 18 bed dorm. Reviews can often be informative but they can also be quite skewed. Something that happened a few weeks ago can be very different to what is happening right now. It was at that point that I realised the backpacking world needed this app,” he said.

Dowling is cognisant of the fact that there are other apps in the market that connect backpackers, but he feels Backpackr is unique in that it moves away from the ‘dating scene’.

“This isn’t an app for people to just ‘hook-up’. Users can select which gender can contact them so sorry guys, there is no ‘swipe for a hook-up’ here. We are happy to refer anyone searching for this feature to numerous other apps. Backpackr focuses solely on meeting other people on the road regardless of gender,” he said.

So how exactly will Backpackr counteract competitors like timeBlend and Quietly? Dowling said they have “a few tricks up [their] sleeves” that will allow them to come out on top.

“With 70 percent of people now travelling with smartphones I feel like we’ve come at the right time and releasing a mobile application first was the only move to take. I personally travel with a simcardless iPhone yet still come across free WiFi everywhere I go,” he said.

Backpackr has been completely self-funded to date and no money has been spent on advertising. Dowling said he recently had an influx of investment proposals, and so they are entertaining the prospect of raising funds for marketing and further refinements to the product.

This year, the Backpackr team will be focusing on a ‘critical mass marketing strategy’.

“I’ve based myself back in London while Brent is in Bangkok – two of the biggest backpacking destinations. We’re in the progress of working with multiple hostels as well as some local pub crawls,” Dowling said.

“We will be working with adventure tour groups in the near future as well which is estimated at $263 billion annually.  We will definitely be using Facebook for target marketing as well.”

The biggest challenge for Dowling and Swallowell so far is one that many startup founders can identify with – spreading the word without spending any marketing dollars.

“It’s still early days and Backpackr is still in its beta stage. We did however manage to reach 1,000 users within the first 5 days of launch,” Dowling said.

Dowling’s proudest achievement to date has been seeing his idea become a reality, three years after conception.

“Ideas are a dime a dozen, having the courage to take a risk and execute your idea is the real challenge,” he said.

Backpackr is currently available on iTunes, and will be available on Google Play very soon for Android users. Dowling and Swallowell will also be introducing a web-based platform for those out there who don’t use smartphones.

More information is available via www.backpackr.org.