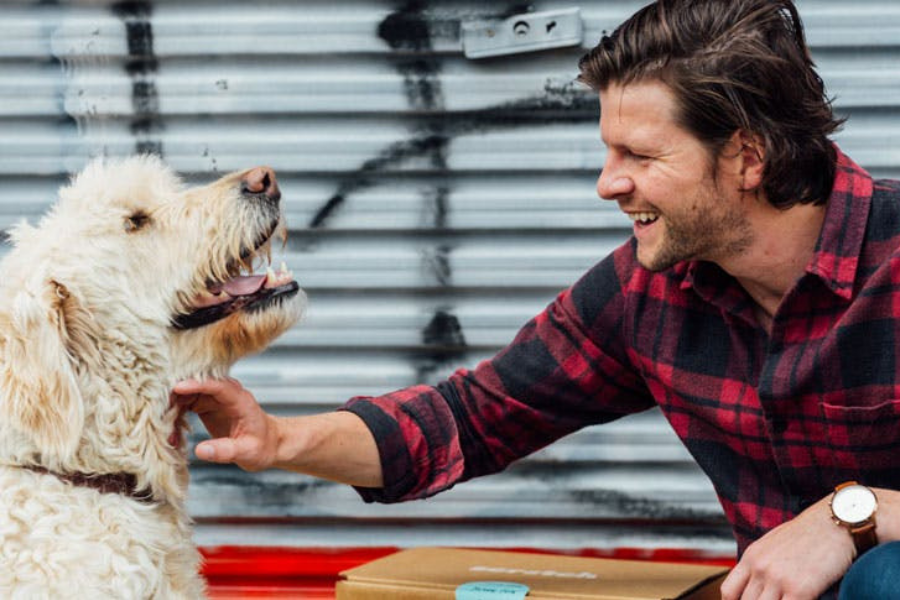 One of the great joys of the internet is that it has made it easier to buy from independent producers and smaller, alternative brands – and have it delivered right to the door.

Tapping into our love of ecommerce, convenience, and pets is Melbourne business Scratch.

Founded by Mike Halligan and Doug Spiegelhauer, Scratch is producing what it believes is a healthier alternative to the dog foods found in supermarkets.

The idea first came to Halligan at the start of the year, when a dog that had been part of the family since his childhood fell ill.

He got to researching dog foods and was scared by what he found: “hidden ingredients, bad ethics, confusing shopping experience, constant discounting and out of touch brands,” Spiegelhauer said.

Halligan quit his job and spent the next four months learning everything he could along the dog food industry.

It was at this point that he met Spiegelhauer, with the meeting coming at the perfect time. – after almost seven years of experience in roles including production manager and operations manager at a pet ingredient and treat manufacturer, Spiegelhauer too was becoming disillusioned with the industry.

He had been spending more and more time designing products for multinational brands and retailers’ private labels, in turn becoming disenchanted with how the whole process was driven by marketing rather than health.

It was also frustrating to see that ingredients only made up 10 to 15 percent of the price of the final retail product, with large markups coming along the supply chain, Spiegelhauer explained.

“Dog food is something that pet parents have to buy so regularly, but it still has up to 80 percent markup in the store, forcing brands to use cheap ingredients that can last in warehouses and shelves for ages,” Spiegelhauer said.

By selling direct to consumers, Spiegelhauer said Scratch spends up to 50 percent more on ingredients. These ingredients are, in turn, declared on the website, with Scratch also stating what percentage of the main ingredients make up the final product.

However, the cofounders didn’t originally set out to produce their own product; in fact, they had planned to source and have at least six ready to go at launch.

“When we worked out that no existing recipe was of a good enough quality and we would have to create our own and source our own ingredients, we had to re-think and de-risk,” Spiegelhauer said.

While Spiegelhauer’s industry connections helped, an added challenge was lack of support from suppliers.

“As we wanted to go beyond what is ‘normal’ in the pet industry, we have faced a lot of pushback from suppliers. This was for everything from packaging to ingredients to logistics,” Spiegelhauer said.

Another issue Scratch has come up against is shipping – not exactly something an ecommerce business can ignore. The problem is that dog food is heavy, which means shipping is expensive.

The cofounders had originally planned to roll out city by city, starting with their home base in Melbourne, however with word quickly spreading they decided to also ship to Sydney for free, and to Brisbane, Adelaide, and Canberra for a fee.

They plan to remove the fee once they open a distribution centre in each of these cities, however.

The dog food itself, of course, is just one part of the product – the other is the Scratch website, which allows for more than simply adding a couple of packs of chum to the cart.

Users are first asked to input some details about their dog, including its name, age, breed or size, weight, and activity level.

“All this information then goes into a calculator we developed with our nutritionist to give specific advice on how much of Scratch your dog should eat each day. This advice changes automatically as a dog moves from puppy to adult,” Spiegelhauer explained.

A subscription is then developed based on how much a user’s dog, or dogs, should eat.

At this stage, the cofounders are hands-on with every part of the customer experience, down to calling every customer to see how their dog is transitioning to Scratch.

“Buying pet food is so shitty that we wanted to be the complete opposite,” Spiegelhauer said.

The startup is targeting not dog owners, but rather ‘pet parents’ – “people with a fur baby that’s part of the family”.

It grew a list of more than 400 of these pet parents pre-launch through various initiatives, including a professional photo shoot for dogs, content marketing, and sharing its journey with its audience.

“It really helped to build a community that knew what we stood for and supported us,” Spiegelhauer said.

Beyond the original dog food, Scratch is now developing a new product, designed for large dogs while they’re puppies.