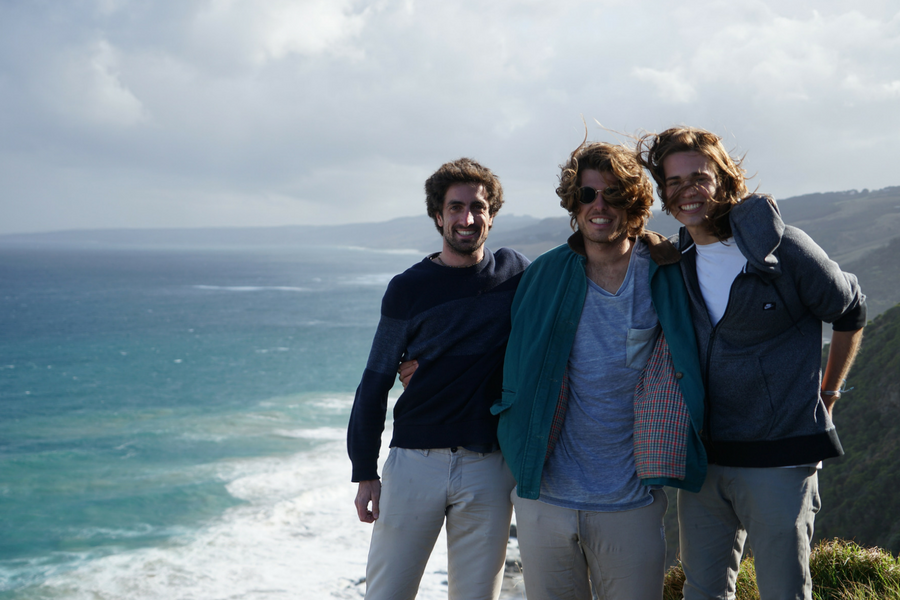 According to the idea of six degrees of separation, any two people on earth are just six acquaintance links apart.

Leveraging this notion to put a new spin on couchsurfing is Melbourne startup Friend Theory. Founded by Carlo Spada, Guillaume Prevost, and Carlos Costa, its platform connects users to friends of friends to find places to stay when they travel.

According to Spada, a millennial has, on average, 180,000 friends worldwide. Through Friend Theory a user can view a map to see where their network is scattered, filter the network, and look at what kind of things a user is happy to provide a friend of a friend, from accommodation to wifi.

The idea came from years of travel the cofounders have done.

Spada and Costa met through a mutual friend while studying in Hong Kong five years ago. Becoming fast friends, they travelled to 17 countries together over the next year, always staying with friends or friends of friends.

“After doing so for over five years across six different continents, we realised how close you feel to friends of friends compared to total strangers,” Spada said.

“After some research, we found out how big the friends of friends network is. However, we also realised that the current process of reaching out to friends of friends via social networks is full of friction and you never get to see the full potential of your network, especially for travel purposes.”

So the pair decided to build a platform to solve this problem themselves.

They began work while Costa was still at university and Spada was based in South Africa, later bringing on Prevost, a software developer and friend of Costa’s, as a their third cofounder. Development was still slow going, however, so Spada eventually moved to Melbourne to join the team and Spada and Prevost left their jobs to work on Friend Theory full time.

Given the idea of Friend Theory is all about saving money, the trio worked as lean as they could in building the platform.

“We didn’t want to raise any money, as we wanted to build the foundations of the project without any outsiders involved in the process. This had a price, though; we had to move to cheaper houses, cut off personal expenses, and find casual weekend jobs to make some cash,” Spada explained.

“It was a bit trickier for company expenses though. Our office was basically a storage room of a university we managed to get wifi passwords from. We worked from there for around half year, with zero budget, not even for proper business email accounts, always finding a way to get stuff done by ourselves without spending any money.”

As they finished the first iteration of the platform, Prevost took a six week trip around the world to test out the idea; according to Spada, he was able to find friends of friends to stay with for the whole trip.

The platform works by having new users fill out their profile with basic information about themselves as their interests, along with what they’re willing to offer to friends of friends, from accommodation to wifi, advice on sightseeing spots and the like.

Users are then able to search by location and see the friends of friends they have in a certain place, and what they can offer, before reaching out to them should they so choose.

According to Spada, the platform will be limited to showing users their network of friends of friends to keep a sense of build-in trust and safety. The startup is, however, working on features beyond blocking and reporting to ensure users are safe.

“Our product is for both male and female travelers, but making sure our female users are the ones feeling more comfortable with it is our priority as well. Female travelers are considerably more concerned about safety than male travelers, so we aim to provide them the product they need,” Spada said.

As one might suspect, the startup is targeting millennial travellers, along with international and exchange students.

“International exchange students are extremely keen on traveling and they tend to be social and open minded. They have a big problem though: they normally don’t have much money,” Spada said.

Pre-launch, the startup has 1,000 users on board, with the first having come from an introduction video Friend Theory pushed on Facebook and referrals.

“Over the past months, we’ve received emails from all over the world from people offering us to help us out with whatever we needed. For instance, we previously had a terrible landing web. A girl from Germany reached us out asking if we needed any help with that, and we did. The day after, she had already developed a landing page for us,” Spada said.

“We’ve managed to build an incredible team of eight people fully committed to getting Friend Theory off the ground without getting even a salary in return…the people supporting us behind the scenes are the real heroes of the project, and we couldn’t be more grateful about it.”

The team has been supported by Melbourne outfit Outcome Life, which has a number of services dedicated to helping international and exchange students, including coworking hub Outcome Hub.

“As international entrepreneurs, we didn’t have any contacts around Melbourne when we started, so we literally went to every single networking event we could, and that’s when we met Gerard, the CEO of Outcome Life. He heard about our project and decided to provide us with an office space as well as with interns and many other very valuable resources without asking anything in return,” Spada explained.

As Spada put it, there are “a lot of reasons” why the team decided to start the business in Melbourne, but one of the key factors is lifestyle.

“We are in love with the laid back Aussie lifestyle and culture and we aim to replicate that in our company culture,” he said.

“To be honest, Melbourne is just great for entrepreneurs, and I feel it only gets better and better. The startup scene is booming and you can really feel how talented entrepreneurs down here are and how much they help each other.”