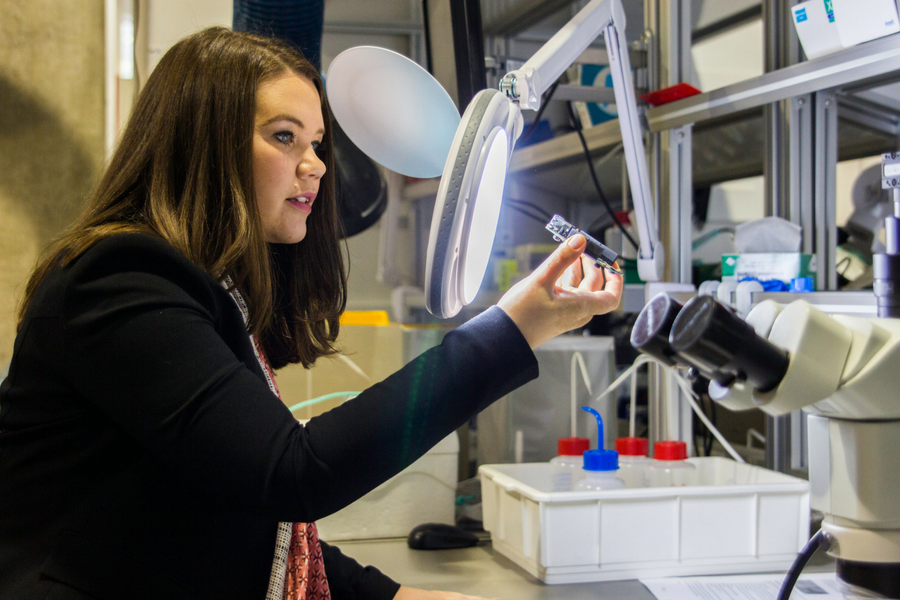 For some it happens earlier rather than later, but at some stage in life everyone will have been through a time where they have seen a close friend or family member suffer through a painful illness or medical situation.

We would likely all say we wish there was something we could do to make it better, take away their pain, cure them, make things easier somehow, but for most of us, the main thing we can actually do is provide them with some kind of comfort through our company.

After seeing a close friend’s battle with cancer, Jacqui Savage, on the other hand, decided she had the background and skills to try to do something she hopes will save lives.

She has launched a medtech startup, MedCorp Technologies, which is developing a wearable device that measures a patient’s core temperature and transmits that information to their relevant healthcare professional.

“The healthcare system as we know it relies heavily on the effective communication between patients and healthcare professionals. This communication is key in enabling doctors to make diagnostic decisions about a person’s health. Unfortunately, we, as patients, are not fully aware of the significance of some of signs and symptoms we are experiencing as we are not all medical professionals,” Savage explained.

“This is where the problem lies. How many times have you felt unwell and despite being instructed to “see your doctor if signs persist”, have waited another couple of days just to see if you improve?”

As Savage explained, this mentality extends beyond those suffering through a common cold to critically ill patients.

“We too often hear about patients not wanting to call their doctors after hours or on weekends due to a fear of being intrusive, despite being instructed to do so. This can result in exacerbated health conditions and in critical patients, health deteriorations and sometimes death,” she said.

“Due to infection in immune-compromised patients, such as those receiving chemotherapy for cancer treatments, the most common of these severe cases is death.”

“This was no different for MedCorp. When you experience something yourself or watch loved ones pass away due to a glitch in the healthcare system which exists because no one has explored a more effective or efficient way to ‘communicate’ with the patients, you can’t help but ask why. I just took that why a little further.”

Having graduated from Swinburne University in 2013 with a Bachelor of Product Design Engineering, specialising in Biomedical Engineering, Savage felt she had the tools to look at tackling the issue.

Not unlike a bandaid, Savage explained, the MedCorp wearable is placed on the wearer’s skin and measures a patient’s core body temperature within clinical accuracy and then transmits this information to the patient’s healthcare professional, who is alerted should any figures be abnormal.

“The measurement of core body temperature is critical in detecting the early signs of infection. Patients with compromised immune systems are instructed to measure their temperature twice a day in order to detect early onset of infection, which is commonly forgotten and carried out using inaccurate devices,” Savage explained.

“In patients where the delayed detection of an infection by as little as three hours can be the difference between life and death, this was something we wanted to change.”

To one without medical knowledge, it sounds like a relatively simple idea in theory, but of course, an immense amount of work went into the development of both the device and MedCorp as a business.

“If I was to go back I probably would wish that my first business or even my first introduction to starting a business was a little simpler than a medical device. To say that it was a baptism of fire to the business world is an understatement,” Savage said.

Working as an engineer developing medical devices and manufacturing products for other companies, Savage knew this was “my bread and butter”, but eventually knew she had to make the jump from working on MedCorp on the side to full time.

“In an interview I did after winning a tech competition, I was asked what I wanted to do with this technology. As soon as the words came out of my mouth, that was it, there was no going back – ‘enable high level healthcare to everyone, worldwide’. I had no idea where it came from but as soon as I said it, I knew that was where I was taking MedCorp and our temperature sensor was just step one. I handed in my letter of resignation the following Monday,” Savage said.

“I did the classic, moving home with my fiancé to save money and lived like a student again. I was very fortunate to have a fantastic group of mentors who truly championed and supported me not only in advancing the company but also in helping me grow my network.”

A key issue a mentor helped Savage overcome was “founderitis”, she said – going from the idea of a wearable, her vision had evolved to wanting to create a product that would be the full integration of drug delivery and patient monitoring from the comfort of the patient’s home.

“I had my blinkers on, I had been so focused on the technology and had the most incredible tunnel vision that I hadn’t taken the step back to evaluate it from a business viability point of view,” Savage admitted.

Along with industry recognition of the work MedCorp is doing, with Savage taking out the 2016 Telstra Victorian Entrepreneur Award, Savage was helped along in the development of the product by a partnership with Swinburne University, which provided her with access to its facilities and testing labs. MedCorp now sponsors final year engineering projects, showing students real-world applications of wearable tech.

Development was also funded in part by Mioplay, a business creating and selling baby toys. This came out of Savage trying to find a present for her sister when she was having her first child; unable to find quality toys, she made one herself.

“My sister, with a PhD in Pharmacology and Neurobehavioral Science, began to educate me of the issues she was experiencing as a new mum with the existing toys available,” Savage said.

“It came to our attention that teething toys for babies on the market were being made of materials which harbour bacteria. They cannot go in the dishwasher let alone a steriliser. I was shocked when pacifiers are designed to be sterilised but teething toys are not – they both go in the mouth, don’t they?”

Learning this, Savage had the idea to commercialise the product she’d designed for her sister, with Mioplay now selling a range of internationally-certified sensory teething toys that are dishwasher, freezer, and steriliser safe.

Along with solving a need in the market, the growth of Mioplay has also served to help Savage learn and understand more about the process of commercialising and distributing a product.

“When having a product-based company it is very easy to become product centric. However, the creation of the product is actually the easiest bit and makes up a fraction of a successful company. This was a tremendous lesson for me,” Savage said.

“In learning this through Mioplay, we shifted a lot of the commercialisation strategy for MedCorp to really focus on our distribution channels now and engage with them during the development phase. This has led to an incredibly support distribution network who have been a part of our journey and have contributed to our commercialisation strategy.”

With this in mind, Savage is aiming to launch MedCorp’s device in 2019, with a couple of other pieces of tech currently in development.

“Our goal truly is to enable worldwide access to high level healthcare.”