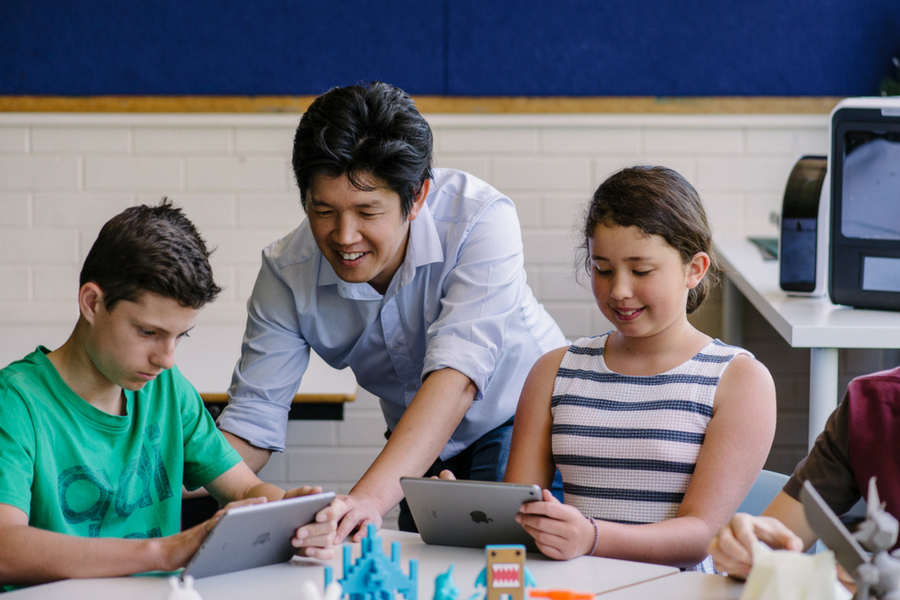 Thinking back about how science, technology, engineering and mathematics (STEM) was taught in the late 20th century brings back memories of tattered cubic building blocks and, if you were lucky, plastic magnetic rods.

For the current generation of kids who receive tablets for their first birthday and an Apple watch the next, however, these aged tools hold decreasing power in getting them actively excited and engaged with STEM.

To modernise STEM teaching, Adelaide startup Makers Empire has developed an app that allows kids to create 3D designs which can later be printed. To help teachers educate kids about STEM and other subjects using the app, the startup has also developed a guided education program and curriculum package.

The curriculum and app apply to students from grades kindergarten all the way up to year eight, although the interactive functionalities are entertaining for all ages – something I can vouch for, having played with the app.

Cofounder Jon Soong, however, explained that the app was originally intended only for young children and came without any direct teaching material for STEM, as partnering founder Roland Peddie begun developing Makers Empire as a helpful tool for his daughter to enjoy.

“My wife’s a teacher and she said I should take it into a school, so we took it into a classroom to test. The students loved it and the teachers were really interested in how it could be used in their classroom to educate the kids,” said Soong.

“Everything we read said 3D printing would become really important for STEM education in schools, and the more time we spent there the more we saw that there was a really big gap between where the hardware and software was compared to where the classroom education was.”

As a way to facilitate the transition for teachers from traditional chalk-and-paper STEM teaching methods to using technology, the startup began developing an educational program.

“Particularly for primary school teachers, we found they needed a bit of help getting the stage of focus on STEM. They don’t have the time to focus on just one or two subjects like a high school teacher, so we made it really easy for them by giving them a curriculum,” said Soong.

Makers Empire’s mindset, according to Soong, was that if kids can be exposed to exciting, hands-on STEM learning early on, they will be at a big advantage when they progress into secondary schooling and also become more likely to choose STEM subjects as a result.

Soong said their aim to develop a curriculum fell in line with the recent push schools and government organisations were exhibiting to improve STEM education and thus presented a rich opportunity, as schools look towards robotics, coding and 3D printing as key learning tools.

For $25 a month, a teacher is able to access an online web portal featuring all the resources they’ll need to begin using the app to educate their students.

This “teacher’s dashboard” also features an analytics section where teachers can review all their students’ designs, in addition to a tool that allows them to download 3D models for printing.

“They download STL files, which can be used to print from any printers, which they can connect to wirelessly or with an SD card,” explained Soong.

For schools that don’t have a 3D printer on-hand, Makers Empire offers packages which contain either a small or large printer, sourced from an external manufacturer.

Each student is able to download the app for free and create their own unique account, which the teacher can tie into their dashboard.

Once logged in, students are presented with a virtual workspace where they can they begin building using a set of tools. There’s a shape or blocking-type module that allows users to build objects brick-by-brick, as well as a character design tool that allows students to create, well, characters.

Shapes can be added, reshuffled and moved using a simple drag and drop or touch motion to build an object. To allow students room for extra creativity, there’s also a free-drawing mode where users can create their own shapes to add.

Once a drawing is complete, teachers are able to choose whether or not the design is “public or private”. Going public means classmates are able to vote on each others’ model, with the chance that a model will go ‘viral’ and be featured on the Makers Empire website.

“We have an algorithm in place that works similar to Reddit, where designs can be upvoted to the front page of our website and featured in the highscores section. This encourages students to work hard and be engaged through competition,” said Soong.

Currently, the total number of designs is sitting at over 574,000, a number attributed to the startup securing a number of client schools across Australia and internationally.

Beginning with Adelaide, Soong said Makers Empire spread to Sydney and Melbourne before eventually heading to parts of Asia and the US to serve 40 different schools.

To expand its offering to different schools and also host special workshops, the startup has formed partnerships with and worked beside companies including Microsoft, Afinia 3D, WestED, and Sphero.

In order to fuel international growth and continue to expand domestically, Soong said the organisation is looking towards partnering with other key organisations, with talks underway.

Although the business has raised $800,000 to date, Soong said the team may looked for additional funding to be able to gain a strong footing overseas.

“We want to get to as many schools and students as we can. We would like to get larger rollouts to bigger educational organisations, whether that be huge districts in Australia or the US,” he said.