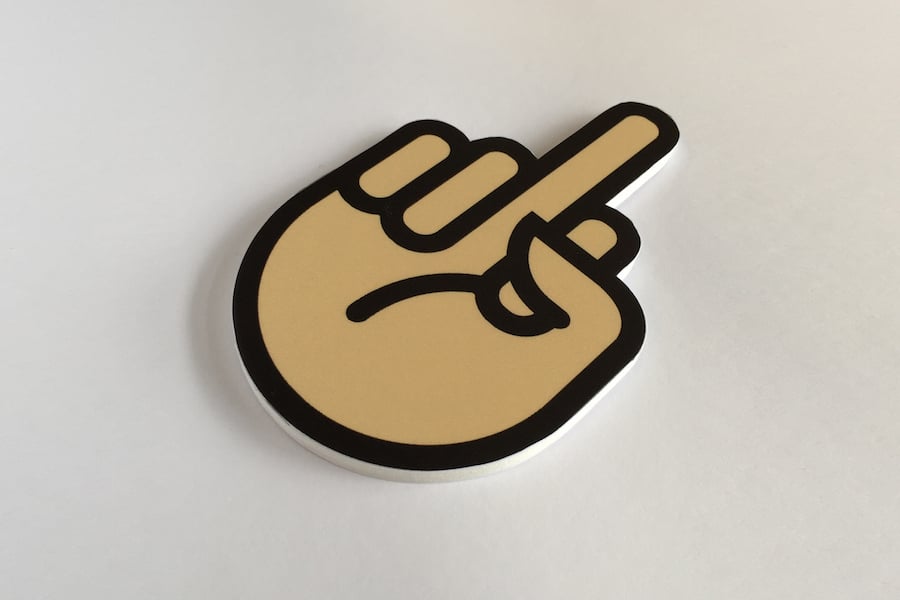 We’re either turning into a really angry, shouty bunch, or it’s just getting easier to untap our anger and put it on show for the world to see thanks to social media. Either way, it’s been fun to see the rise of online stores this year that are helping users send their enemies glitter, bags of dicks, or musical cards that won’t stop playing.

The latest is Mail the Finger, a self-proclaimed ‘fingers-as-a-service’ company which sends out foamboard middle fingers to people who’ve pissed you off one time too many.

Cofounder Shane Lee, who describes himself as “generally a ridiculously nice fellow” who has “spent the majority of the past ten years working in different capacities with a very small but select group of people he wishes he could tell to @$%# off,” said there was no one dramatic, angry moment that led he and his two cofounders to launch the product; they merely thought it would be a fun idea after one received a bag of gummy dicks.

Mail the Finger warns the faint-hearted to turn back before they get in too deep by asking, “Are you the kind of guy who gets along with everyone else? If you are, go back to your Crossfit routine and Paleo diet. There’s nothing for you here.”

If not, though, keep going and don’t feel bad about what you’re about to do. As the site explains, “We’re all pretty nice chaps but c’mon, anybody can think of somebody they want to give the finger to.” True.

What’s more, Mail the Finger doesn’t blame you for your anger. In fact, it totally gets where you’re coming from and thinks you should just let it out: “You’re a good guy. You’ve trudged on through life stoically enough, soldiering on despite the inherent shittiness of everyone around you. You’ve given it your best shot and I applaud you for it. Unfortunately, sooner or later, something has to give.”

Now, Mail the Finger acknowledges that there are other ways for you to tell someone to rack off, but it believes it’s the only one that will really get the message across.

“This isn’t some passive-aggressive shit like glitter or dick-candy. This is a Grade-A, aggressive-aggressive symbol of contempt, a symbol that says “fuck you”, “fuck off”, “up yours” and “go fuck yourself” all at the same time. Our foamboard middle finger isn’t some limp-wristed, wishy-washy bird.”

You can unleash your anger by post for $12. If you’re extra pissed off, you can send a ‘double bird salute’ for $21, or a finger and a certificate of authenticity for $15.

Now, despite the strong copywriting, the co-founders know their product’s really just a gag and the vast majority of people who send a finger are actually going to send it to a friend as a joke rather than mail it to someone they hate. We may be shouty on social media, but it turns out we’re mostly fine in real life.

Lee said, “I’m proud of the fact that we’ve managed to ship something that we hope will bring a smile (or frown, depending on that person’s constitution) to someone’s face. This, despite the occasional negativity we’ve gotten. Most people laugh and recognise this for what it is…a fun and novel gag gift but haters will come up with a thousand and one ways to shit on you. There’ve been countless haters for the myriad gag products out there and ours won’t be any different. All we can do is continue to work hard and to mail them the finger.”

TechCrunch had a go earlier this month, railing against the likes of Dicks by Mail and Ship Your Enemies Glitter in a post titled ‘Your Edgy Startup Idea is Stupid’. Sure, all of these are pretty stupid and not actually edgy at all, but they can make for a fun joke between friends. What’s more, the people behind this stuff know it too: Lee and his cofounders want to stay, for the most part, anonymous, as Mail the Finger is just a fun side project for them outside their corporate jobs. In the mean time, let people enjoy a joke.

Previous article Mr Tradie is the latest startup looking to help tradies experience the benefits of technology
Next article StarNow has 3.5 million registered members and has never raised any capital
Via Advice
Tags dicks by mailecommercefeaturedgag giftsjokesMail the Fingershane leeship your enemies glitterstartups