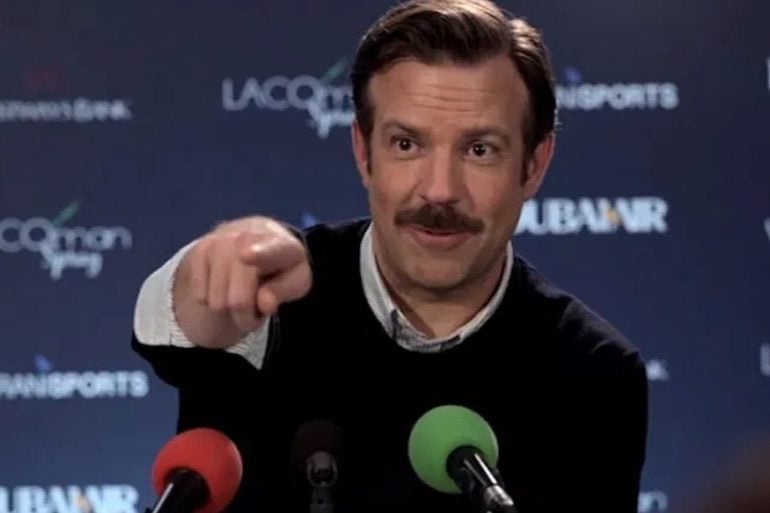 The best sports-flavoured TV and movies always weave in a good lesson or two. Today I thought it’d be fun to look at what leaders can learn from some of our favorite Hollywood coaches. That includes project leaders and culture carriers, too – not just people managers.

Disclaimer: my list of coaches is very US-centric and predominantly male. There’s clearly room for more diversity in the sports genre. That said, there must be loads of worthy fictional coaches out there I simply don’t know about. Join this discussion on Atlassian Communityto tell me who I’ve missed and what we can learn from them!

“I appreciate you. I really do.”

You knew Coach Lasso would be on the list, right? I

’ll save you the trouble of scrolling and just talk about him first. I defy you to find a coach, whether on-screen or off, who is better at showing appreciation.

He bakes buttery sweet biscuits in the evenings and delivers them to AFC Richmond’s owner each morning.

He gives high-fives at every possible opportunity. And just to make sure the message gets across, he tells his team and staff straight out that he appreciates them.

What makes Lasso extra special is that he focuses on the person, not the action. He understands the difference between “I appreciate it” and “I appreciate you.”

What he gets in return is a team that is resilient and loyal, both to their coaches and to each other. So much so, that when an assistant coach shares some uhhh… unfiltered feedback on the team’s performance, the players not only take it to heart but actually turn the coach’s rant into a roast and have a good hard laugh at themselves.

Mr Miyagi is the epitome of patient mentorship.

His karate pupil, Daniel, comes to him practically bursting with a desire to show the bullies from the Cobra Kai dojo what he’s made of. But Mr Miyagi gently redirects Daniel’s energy into learning the fundamentals of karate, starting with the most basic of basics like balance and hand-eye coordination.

Only after Daniel has mastered the discrete movements does Mr Miyagi let him string them together into kicks, punches, and blocks.

Despite being a black belt himself, Mr Miyagi never gets frustrated with Daniel as he struggles to learn the more complicated moves. That alone is noteworthy!

Once you’ve mastered a skill, it’s incredibly difficult to remember what it’s like to be a beginner. We lose empathy quickly, which can bubble to the surface in the form of exasperation and disappointment. (If you’ve ever tried to teach a kid how to ski, tie their shoes, or fold laundry, you can probably relate.

So next time you’re training a team member on a new skill, try to channel your inner Miyagi and take it slow.

Greatness can come from anywhere, even from a small town in central Texas. Monica Aldama, real-life cheerleading coach at Navarro College and central figure in the Netflix series “Cheer,” knows that you don’t need big names or big budgets to win big.

But you do need determination. That’s why her squad has won 15 National Cheerleading Association championships since 2000 and holds the record for the highest score in NCA history.

When injuries inevitably occur, she is visibly frustrated at the situation – but not at the individual. She treats her athletes with compassion, allowing them time to fully heal instead of risking re-injury.

To her, determination means making smart decisions that might test your patience, but keep you on track to take home the big prize.

That’s a model worth following when your team experiences a setback: let them catch their breath and process all the emotions that are swirling around, but don’t give them an easier target to aim for. Appeal to their sense of ambition and firmly but gently insist they keep at it.

“I don’t care if you like each other or not, but you will respect each other. And maybe… maybe we’ll learn to play this game like men.”

Coaches Boone and Yoast took their Alexandria, Virginia high school football team all the way to state championship glory. But not before harnessing the power of empathy to resolve some seriously toxic team dynamics.

Their first year coaching together, 1971, was also the first year the football team was integrated despite racial segregation in public schools having been outlawed nearly two decades earlier.

The players and coaches weren’t coming together by choice – the decision to integrate had been made by the school board. Unsurprisingly, tensions were high.

The Black players on the team already knew and liked each other. Same for the white players. But each group was suspicious of the other. That all changed at training camp.

Coach Boone made sure white and Black players not only roomed together but actually learned about each other, mandating three practice sessions per day until every player could tell him something personal about every other player.

The tactic was forceful but effective. By the end of camp, they were a cohesive team both on and off the field.

Comparing the dynamics of racial segregation and integration to – well, to anything, really – is precarious. Still, there are some parallels between the Titans’ story and our modern professional lives.

Think about workers who get shuffled and redistributed into new teams as a part of a re-org. Or whole companies brought together by an acquisition. Uncertainty, confusion, and even resentment abound. And yet the work still has to get done.

Launching an empathy-building campaign might be the fastest path to team harmony.

“You have achieved something that some people spend their whole lives trying to find. What you achieved is that ever-elusive victory within.”

The story of Ken Carter, also a real-life coach, and his team shows that people will rise to meet high expectations if you provide the right kind of inspiration.

Carter coached high school basketball in Richmond, California – an industrial city just north of Oakland that suffered from high crime rates in the mid-2000s, when the movie takes place. He understood that, by default, boys in the community often felt they were limited to one of two paths after high school: crime or sports.

But Carter wanted them to understand they could accomplish much more. Knowing that only a tiny fraction of even the most talented players make it to the pros, he was determined to see his boys graduate and have a shot at a college education.

He made players pledge to maintain a C+ average. When their grades dropped mid-way through the season, he suspended the entire team, forfeiting several games and scuttling their undefeated record.

Parents and school board members were outraged and voted to force Carter to end the lockout. But the players refused to play.

Having now seen what they were capable of off the court, they held themselves accountable to their pledge and their educational goals instead.

Six players did indeed go on to college.

By appealing to their long-term interests and their sense of self-respect, Carter inspired his players to give it their all both on and off the court.

The next time you set an ambitious goal for your team, take a page from Coach Carter’s playbook and think about how you can inspire them to achieve things they don’t even know they’re capable of.

‘‘Even in the heat of battle, I’m elegant, regal. I am Ajax, mighty Greek warrior.”

Which, to be clear, is not cool.

But credit where credit is due: she nails it on advocacy.

Sylvester fights tooth and nail to get her squad the funding and resources they need to succeed.

You are your team’s one-person booster club.

Make sure they see you advocating for them when it comes to budgets, juicy projects, and recognition.

Sarah is a writer whose work has been featured in Harvard Business Review, Inc., Huffington Post, as well as industry publications.
She works remotely from her home in Minnesota and loves every minute of it. When she's not writing you can find her reading, snowboarding, cooking, and/or exchanging groan-worthy puns with her kids.