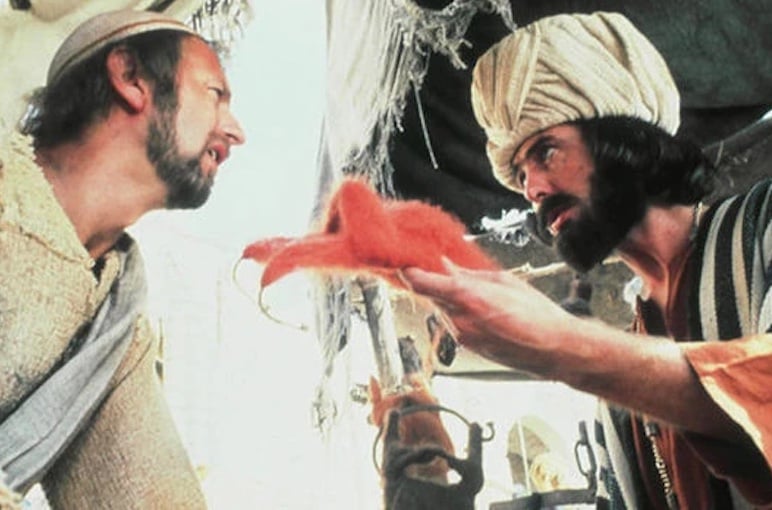 Haggling over the valuation is one option. Image Monty Python's Life of Brian/HandMade Films

(In the interests of simplicity I’m just going to work with pre-money valuations on priced equity rounds here. If you’re raising a SAFE or convertible note, when I say “pre-money valuation” you should think “valuation cap”).

If you’ve generated no revenue yet, and you raised $500k at a $3M pre-money valuation a year ago, is your startup still worth at least $3.5M? It depends.

The first step is to accept that there’s no such thing as a fair pre-money valuation, only a valuation that the current market will accept. Pre-money valuation is a question of  supply and demand, and you and your startup are only in control of the supply half of this equation — the level of investor interest, the rate at which the round is filling up, and the number of investors  who are interested determines the demand.

Some will tell you, “what investors will pay is based on what you think you’re worth” but that’s both true and untrue.

What you think you’re worth plays into it, in the sense that you don’t get what you don’t ask for. And you (and any existing investors in your startup) may have a fixed price anchor based on the post-money valuation at the previous round, or perhaps the valuation of a similar startup that raised a similar amount at a similar stage in recent history, or another startup like yours that is raising at the same time.

But that price anchor is an illusion — the markets are volatile and while the next few years don’t yet look like another Dotcom Crash, they don’t look great, so your pre-money valuation is probably dropping as each month goes by, unless you’re rapidly gaining proof in customer traction and revenue growth at the same time.

While we’re talking about change over time, let’s also factor in the rate at which your round is closing.

If you have a first call with a VC with no commitments to your $500k round, and then a second call two weeks later with $400k of the round already committed, it feels like the round is closing very quickly and if the investor is interested, the pressure will be on and you have some leverage. If you meet them six months after your first call and you only have $200k committed to the round, there’s no FOMO (Fear Of Missing Out) and no pressure on the investor to consider a higher valuation.

Another factor is the size of the funds you’ve got interest from. All else being equal, a bigger fund is more likely to invest at a higher pre-money valuation than a smaller fund. A smaller fund manager has less capital to do follow-on investment at later rounds at higher valuations and is biased towards buying as much equity as possible at the first round.

A larger fund is more likely to see their first investment as a means of having an option to invest in follow-on rounds if your success continues.

Uniqueness is another variable in determining investor demand. For many VCs, if they’ve never seen anybody working on what you’re doing, that’s going to make you seem more interesting and potentially increase your possible valuation. But some VCs will be exactly the opposite — they’ll need the comfort level they feel when they’ve scoped out 4-5 startups that are all similar to yours and have decided that your startup is the best in the field right now.

In that situation, demanding too high a valuation may be the cause of the VC investing in one of your competitors instead of you.

The other factor to consider is whether investing in your startup is an opportunity to build a relationship with an ‘A List’ VC for other VCs without ‘A List’ status.

You might be excited about the bragging rights of saying an A List VC led your round but instead you should be thinking about whether other less-well-known VCs would be excited about being on the same cap table as the A Listers, and whether that might give you an opportunity to nudge your pre-money valuation up.

Of course, if you didn’t want to accelerate all those things  you wouldn’t be working on raising investment, but in the struggle for valuation supply and demand, the most demand is reserved for that most desirable of tech startups — the startup that can plausibly continue to grow without raising a round.

All of this probably makes you wonder: how do I know what are the VCs thinking when I pitch them?

All I can say is ask them; politely but don’t be afraid to do so. They may not always answer honestly but hopefully you’ll be able to read between the lines.

Previous article Australia gets a new bank, Alex, for Christmas
Next article 5 founders share their predictions on the year ahead for their startups
Via Investing
Tags Alan Jonescontributor postvaluations