The Insect Revolution: Are crickets the key to a sustainable future? 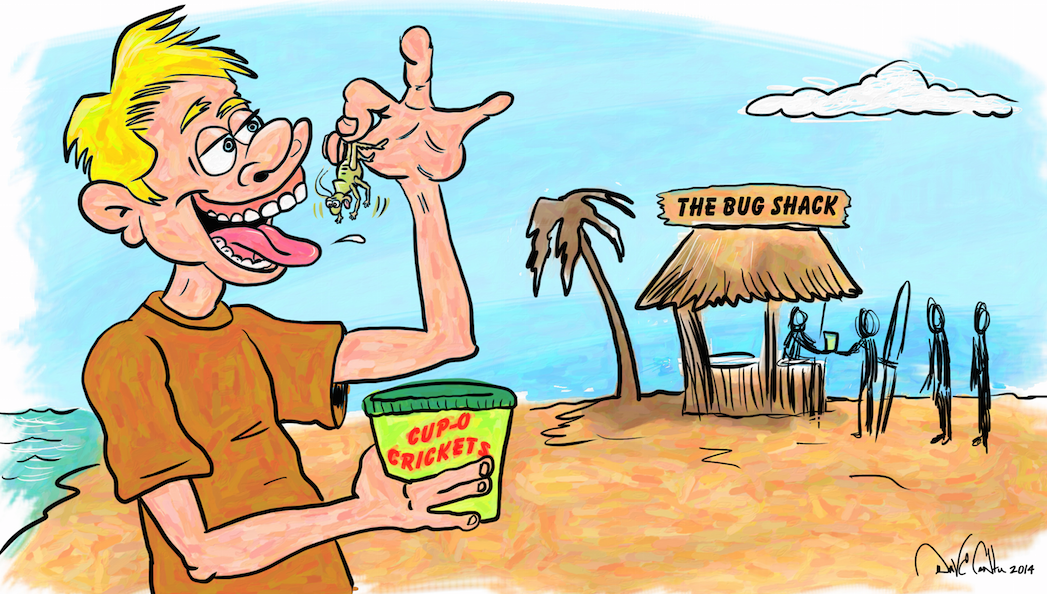 Eat an insect. Save the world.

A ridiculous concept, right? Well, over 2 billion people around the world who enjoy insects as part of their daily diet would disagree with you.

In fact, what we are starting to see in the West – particularly in the US and slowly creeping into Australia – is an emerging culture, or perhaps a movement, where people are coming to realise the health, financial and environmental benefits entomophagy (the consumption of insects).

At the moment, in Australia, there is only one place that offers the public a range of edible insects, in complance with Australian Food Standards. That place is Edible Bugshop, founded by Entomophagist and Food Scientist, Skye Blackburn. Restaurants such as Kylie Kwong’s Billy Kwong are regular customers of Blackburn’s, purchasing crickets for one of their main dishes – which is a permanent fixture on the menu.

When we look back at the history of Australia, eating bugs nothing new or different. In fact, in Aboriginal culture, witchetty grubs, insect larvae, whirligig beetle and wood cockroach were just some of the regular food staples consumed before European settlement.

Blackburn believes that over the next 10 to 20 years, eating insects will become a normal part of everyday Australian life – mainly out of necessity and as a way to maintain a more balanced food ecosystem in the country. If correct, Blackburn will have done well to position herself and her business as the pioneer of the sustainable protein movement in the Australian market.

Aside from the fact that she is currently the only commercial farmer of insects in the country that complies with Australian food standards, Blackburn also has a trump card – holding the Australian patent for the process of harvesting, grinding and processing insects into products such as cricket flour, silk worm flour, protein bars, protein powder and other food items. As the industry grows, this patent will represent plenty of opportunities for Blackburn’s business. There is sure to be competitors entering the marketplace seeking to license Blackburn’s technologies in order to produce their own brands of insect products.

If you think the notion of insect farms cropping up around the country seems slightly far-fetched, I’d advise you to look at the way governments in South East Asia look at the space. For instance, just last year, Thailand’s government subsidised over 20,000 cricket farms around the country so that it could keep up with the demand of the people. As we head into a future, where natural resources become scarcer and scarcer, and growing meat becomes harder and harder, it is not completely ridiculous to expect a future Australian parliament looking into doing something similar.

After all, the breeding time from egg to an edible insect is a mere six weeks – compared to the longer lifestyle of other livestock and poultry we are more accustomed to. The natural resources required to grow them is considerably less as well, with 200 grams of crickets only needing 1mL of water in comparison to 200 grams of beef needing 4000mLs.

The death process is also painless and quite natural. In the same way that insects tend to disappear during Winter time due to them dying of the cold, freezing insects over the course of two days sends them off to sleep, meaning less stress for them and no mess for humans – unlike hatcheries and abattoirs.

And it’s not just everyday food consumption where the opportunity lies. Blackburn and her team are currently in the process of testing some new insect-based workout supplements for gyms and bodybuilders – with some insects containing up to 50 percent protein. If the uptake turns out to be what they are expecting, could the fitness industry begin to steer away from promoting synthetic and potentially harmful products in lieu of suggesting people go with a natural and more sustainable product? Time will tell.

Whether the thought of crunching into a cricket san choy bow delights or disturbs you, one can not deny that soon there will be a new food movement coming to town. It is just as much about healthy eating as it is a social and political conversation about sustainability.

So what do you say – would you eat a cricket to save the world?