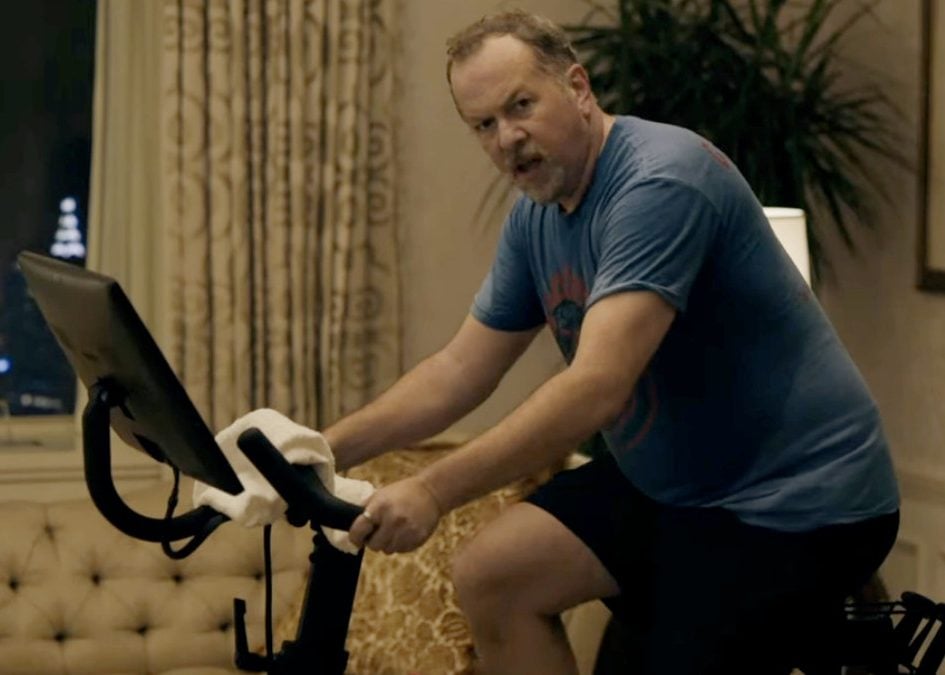 The main use for Peloton bikes now appears to be as mortality plot point in TV shows. Image: Showtime/Billions

Paying by card? There’s an app for that. Move over Square terminals, U.S. merchants will soon be able to accept contactless payments (eg Apple Pay, Google Pay), by using an iPhone – no additional hardware is required.

In a non-Apple-like move, the iPhone NFC chip is being opened up to third-parties to create apps that enable the Tap to Pay technology (rather Apple than processing the payments itself). That’s good news for developers and payments processors like Stripe, which will be the first payment platform to offer Tap to Pay. Apple is likely trying to appease law makers and antitrust regulators who have been critical of its closed ecosystem – particularly its control over payments and the NFC chip.

How the Meta has fallen. Meta’s market cap dropped below $600bn on Tuesday for the first time since May 2020, seeing it drop to the eighth most valuable US company. Proving that the Zuckerverse is in fact a simulation, that $600bn figure happens to be the threshold that legislators set to determine whether potential antitrust legislation should apply to a ‘Big Tech’ company.

In other Meta news, PayPal and Palantir cofounder Peter Thiel is leaving Meta’s board to focus on “political endeavours” (mega Trump supporter). Thiel joined the board after backing Facebook as its first outside investor with a $500k cheque for a 10.2% in 2004. At the time Facebook had around 1 million users. It now has nearly 3 billion.

UnArmed. Silicon Valley chip maker Nvidia—which is now worth more than Meta—has officially abandoned its acquisition of Arm, a U.K. chip designer. This comes as the result of “significant regulatory challenges,” namely from U.S., U.K. and E.U. antitrust regulators and Nvidia competitors (e.g. Qualcomm, Microsoft) who were concerned the merger would lead to higher prices, less choice and reduced innovation.

The deal, which was initially valued at US$40bn (now $66bn as a result of Nvidia’s booming share price), would have been the biggest ever in semiconductor history. Instead, Arm has effectively been branded un-acquirable, leading many to speculate about its viability as a standalone company.

Spin time. With a -76% shareholder return in 2021, Peloton was the worst performing of all Nasdaq 300 companies last year. Sadly, 2022 isn’t looking any better. On Tuesday Peloton announced it is slashing its FY22 outlook ($3.7-$3.8bn revenue guidance down from $4.4-$4.8bn) and cutting 2,800 jobs. CEO John Foley is also stepping down after being the subject of a scathing, yet slick campaign by activist investor, Blackwells Capital. Blackwells, which owns nearly 5% of the company, argues that Peloton is “an attractive business… [but] grossly mismanaged”:

Tech jobs = good jobs (obvs). According to new research from the Tech Council of Australia:

Indian tech giant HCL is launching its IT training program, TechBee, in NZ. The fully sponsored program will train school leavers to fill critical tech skills shortages. Students may also be eligible for NZ$2,500/month as a monthly stipend.

Airbnb PR genius. Last year Airbnb listed the Home Alone mansion, Carrie’s apartment from Sex and the City, and the Italian villa featured in House of Gucci. Now it’s Bluey’s turn! A real, life-size version of Bluey’s house is being made available to rent on Airbnb for one weekend only. The marketing move is the perfect mix of FOMO and nostalgia, with a dash of “Mum/Dad, can I have it? Pleeeeaase” nag-inducing tactics. Ironically, dogs aren’t allowed in the property.

Officeworks goes circular. Officeworks has acquired a 21% stake in World’s Biggest Garage Sale – a circular economy social enterprise that repairs, repurposes and resells second-hand goods, while also providing training and employment opportunities to people with disabilities. To date, it has diverted some 4 million kgs of goods from landfill.

New FinTech CEO. FinTech Australia has appointed Andrew Porter as its new CEO. Porter is an investor and has held senior roles at OFX, World First and TransferMate. A large part of Porter’s new role will be liaising with the government on payments technology, cryptocurrency and blockchain policies.

Ramping up the pace: accelerator news

Happy. Startup accelerator Startmate saw its first exit from its 2012 fund, turning its $25k investment in HappyCo into $3.4m by selling out of the PropTech as a part of its latest $72m round. Startmate is now raising a $50m fund. For context, the 2012 fund was just $380k. How far the ecosystem has come!

Space. Space companies from as far as India and Germany are making their way to South Australia to be part of the state’s Venture Catalyst Space program run through UniSA’s Innovation & Collaboration Centre:

“From using satellites to combat overfishing, to designing technology to grow plants in space, to even creating humanoid robots to perform tasks in zero-gravity, this cohort has a lot in store for us.”

Earth. Three entrepreneurship programs have received $600k from LaunchVic to help create the next generation of AgTech startups in Victoria: Farmers2Founders, Rocket Seeder and SproutX.

Before the beginning. Know an aspiring women founder? Maybe it’s you. Applications for Atto’s pre-accelerator program for 2022 are open now.

Karbon raised $93m (US$66m) from Tidemark for its accounting practice management software. Karbon (who also happens to be one of our incredible Ignition Lane advisory clients) says more than 80% of its users report the product is the most important part of their technology stack. The raise was led by Tidemark’s founder and GP Dave Yuan, a VC veteran and early supporter of ANZ SaaS – in his time as GP at Technology Crossover Ventures (TCV) Yuan led investments in Xero and SiteMinder.

Slyp raised $25m from the big four banks and others. Replacing paper receipts, Slyp enables customers to receive an itemised tax receipt inside their mobile banking app or via SMS.

Reejig raised a further $15m just four months after its last $6m round. Reejig gives companies an overview of the skills base within its workforce, so they can redeploy talent and fix future skills gaps by recommending upskilling opportunities. AirTree says Reejig is one of the fastest growing companies in its portfolio.

VentureCrowd raised $10m to expand its crowdfunding platform into Southeast Asia. Over $146m has been raised by more than 200 Australian businesses on crowd funding platforms in the last four years.

Paypa Plane raised from CBA “to revolutionise the payments experience for businesses and consumers.”

Locomote raised $4m at a $30m valuation from wealth management firm Escala. Locomote is a tech-led corporate travel agency founded by cousins, David and Ross Fastuca. Fun story: the pair founded Locomote in 2012 and sold it to NYSE-listed travel tech giant Travelport in 2016. Travelport was then taken private and, by July 2020, Locomote was sold back to the cousin founders. Now they’ve got ambitious plans to take the corporate travel world by storm.

Cherry Recommends has been selected to take part in the OG of accelerator programs – Y Combinator, receiving US$125,000 along the way. The product analyses retail and ecommerce customer data, creates a rich view of a customer, then delivers personalised promotions that aim to increase satisfaction and revenue.

Somehow I’m old enough to remember dial-up but young enough to rage-quit any website that takes longer than 5 seconds to load.