Ignition Lane’s Weekly Wrap: The IPO rollercoaster – who’s in and out, Rivian gets trucked, how Netflix delivered 500x 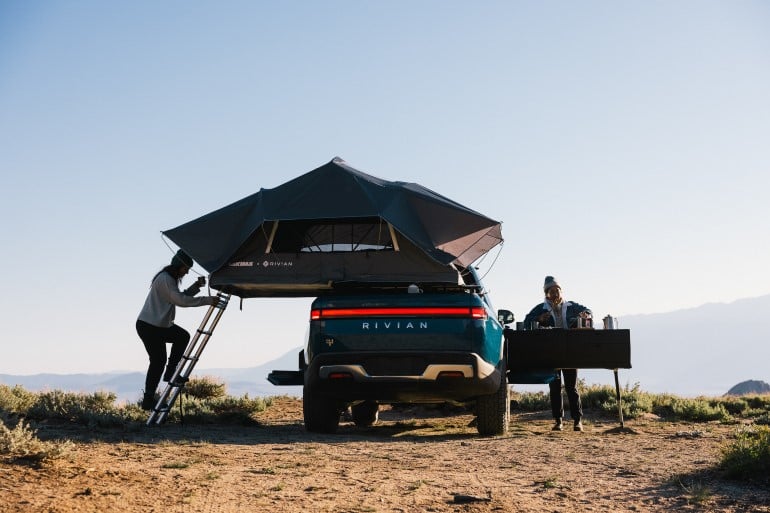 Pitch perfect invention. Nuratrue, the earbuds created by Melbourne-based Nura, made Time Magazine’s list of The Best Inventions of 2021. The buds measure sounds that your cochleas produce in response to various tones, and then applies a custom aural profile to anything you listen to, creating a richer, more detailed experience. A party for your ears.

Xero reported a net loss of NZ$5.9m for the six months to 30 September 2021. That’s a bit of a departure from last year’s NZ$34m net profit. However Xero is investing for growth, and it shows – annualised monthly recurring revenue (AMRR) grew 29% to NZ$1.13bn.

Nitro’s European intention. Document productivity software company Nitro is acquiring Connective, a European-based eSignature provider in a deal worth €70m (A$110m). The bulk of Connective’s business is in Belgium and France, where it provides eSign solutions to more than 950 customers who require high levels of trust, security and regulatory compliance. Nitro is raising $140m to fund the acquisition and continue on its growth plans.

Linktree’s shopping extension. Linktree launched Stores with its first partner, Shopify. With this free integration, Shopify’s 2 million merchants can launch a Shopify storefront on their Linktree to showcase their products and services to drive more sales.

Catapult’s eSports dimension. Sports analytics tech company Catapult is expanding beyond reality and into the online world of eSports. It has secured a multi-year deal with Motorsport Games, which develops eSports games series including NASCAR, Le Mans and Formula E.

The power of celeb attention. Ashton Kutcher, Kate Hudson, Dr Dre; more and more celebs are making their way into the startup space, using their star power to influence buyers and grow their wealth. Main Sequence Ventures thinks our local Deep Tech startups could benefit from teaming up with influencers, and has launched Voice Capital to help them do just that. Chef Neil Perry (founder of the Rockpool empire) is the first to sign on, and Main Sequence says there are a “wide group of people in Australia, Europe, the US and Asia” in its pipeline.

Crypto convention. Another example of celeb endorsement, in October Crypto.com launched a TV ad campaign starring Matt Damon. Now the crypto wallet fintech is launching in Australia, rolling out a Visa card that lets consumers to spend their cryptocurrency in stores.

Metaverse pretension. Sydney-based studio MYAMI has created a digital fashion line, with grand plans to use an NFT “stingray” jacket (below) to spark a metaverse fashion house. MYAMI founder explains, “I think the thing for digital fashion, and the NFT space from our perspective, is that your digital identity is as important as your real world identity.”

If NFT discussions confuse you, fear not. You’re not alone:

It's like being a farmer who's trying to learn about marijuana as a prospective agricultural product from people who can only talk about how high they are.

Biggest in the land. On Wednesday Rivian, a California-based startup that makes electric utes, hit the Nasdaq with the world’s biggest IPO of 2021 – raising over US$11.9bn and attracting a market cap of nearly US$70bn.

Shares surged as much as 40% on the first day of trading. With a market cap of $109bn, Rivian—which is 20% owned by Amazon—is now worth more than Ford ($77bn) and GM ($92bn). A huge valuation considering it has only delivered 156 pickup trucks this year (nearly all went to its employees) and H1FY21 losses totalled nearly US$1bn. What can we say? ‘Murrica loves driving massive pickup trucks round town and the future is green.

Meanwhile, GM is building an electric prototype for the US military based on the Hummer EV.

140 millionaires. Also on the Nasdaq, expense-management platform Expensify IPO’d raising US$70.2m. Shares rose more than 50% on its first day of trading, sending its valuation to nearly US$4bn. On listing, Expensify surprised 140 employees with a 10% equity grant, making nearly all of them paper millionaires if they stay working for the company in the long term. This is in stark contrast to Mailchimp, where founders recently made billions on its sale to Intuit (after promising never to sell out), while employees—most of whom have no equity—were left with pittance.

Fully booked. SiteMinder raised $627m in its oversubscribed IPO on Monday, going public on the ASX. The IPO price of A$5.07 turned the hotel commerce platform into a unicorn, with a market cap of A$1.36bn. Shares climbed more than 50% in its first two days of trading. CEO Sankar Narayan commented he was “pleased with the quality of investors,” which were key in making the IPO a success.

Deal fatigue setting in. Comparison site Compare Club and medical appointments booking platform HealthEngine pulled their IPOs this week. Why? “Deal fatigue.” There’s only a limited amount of spare cash floating around institutional investors’ pockets and, with so many IPOs hitting the markets at the moment, not every company is able to secure high quality cornerstone investors. Without these investors taking up a chunk of shares, companies risk having too much liquidity in market, which can make for a volatile share price. Gotta create that FOMO.

More on the horizon. Deal fatigue concerns aren’t stopping everyone though. UK-listed online retailer MySale announced it wants to raise A$60m and list on the ASX by Christmas. Melbourne-based rewards and loyalty solutions provider My Rewards announced it is raising A$5-7m and plans to list with a market cap between A$39-$41m on 17 December.

There’s a SPAC for that. Australia’s first tech-focused SPAC (Integral 1) listed on the Nasdaq last week, raising US$115m ($155m). The team are now hunting for a fast-growing, high-valued local tech company to turn into a unicorn.

“This deal also funds the future, providing a platform for further expansion into the electrification thematic with our soon to launch home energy offering and plans for electric vehicles”

Mod.io raised US$26m led by Tencent for its software that enables cross-platform user generated content and creator communities in games.

Una Brands raised $20m to grow its ecommerce brand empire. Since launch, it has acquired more than 15 brands, and now has a 90-person team across seven offices in Australia, Singapore, India, China, Indonesia and Malaysia.

Edstart raised $10m from HEAL Partners and NAB Ventures for its BNPL offering for private school fees. Geelong Grammar School is the most expensive school in Australia at $42,500 per year for a Year 12 day student.

Hindsite raised $3.25m for its micro-training platform, valuing the business at $18m. Hindsite makes it easy for skilled people to record videos showing how they apply their craft (eg trades) so the skills can be shared around the world.

CommBank led a US$100m round in California-based H2O.ai, which provides a cloud platform to simplify machine learning deployment.

Deals around the world

McAfee goes public to private: take 2. A consortium of six investment firms made a bid to purchase McAfee for $14bn – a 22.6% premium on the stock’s closing price last Thursday. The company sold its enterprise arm earlier this year to Symphony Technology Group for $4bn. McAfee may be decades old (it’s 34), but its consumer security business is still growing strong – revenue up 24% YoY to $491m from over 20 million subscribers.

The company has a complex history, starting life in the 1980s selling firewall software. It eventually went public before being purchased by Intel for $7.7 billion in 2010 and going private again. In 2014, the company changed names to Intel Security before Intel sold a majority stake to TPG in 2017 for $4.2 billion and changed the name back to McAfee.

Spotify is still plotting to expand beyond music. Spotify’s music gig just isn’t that profitable, so it has been investing hundreds of millions to build out its podcasts business over the last two years. Now it is moving into audiobooks, announcing plans to acquire Findaway for an undisclosed price. The audiobook services and distribution company founded in 2004 pairs authors with narrators, and could become a new and valuable source of revenue for Spotify. Spotify has 381 million monthly active users.

Elon “Market Man(twitter)ipulator” Musk. Elon Musk was back at his dastardly tricks annoying securities regulators again this week. The story starts in September, when he set up an automatic plan to sell stock, including 2012 options converted with a $6.24 per share exercise price (the price is currently well over $1k). Then, just to have some fun in the weekend, he asked the tweetersphere to vote yes or no as to whether he should sell down 10% of his Tesla stock, in order to pay some tax. Twitter voted Yes (57.9%). Tesla stock plummeted. The trading plan (from September) kicked in and he subsequently sold down about $5bn worth of shares.

A $2,000 investment in the IPO would be worth $1 million today. pic.twitter.com/rZYB6HsIAp