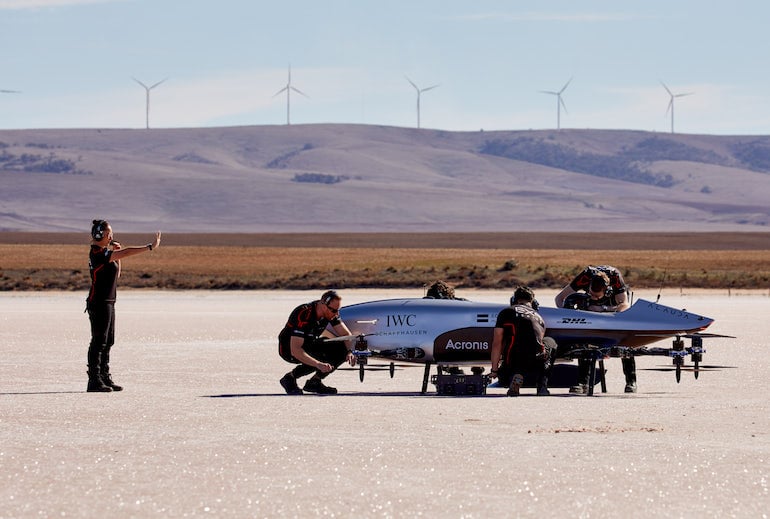 The eVTOL-taxi industry is also taking off. This week the NY Times profiled key startups in Silicon Valley’s airtaxi industry, including Joby (which is merging with a SPAC backed by LinkedIn cofounder Reid Hoffman) and Kitty Hawk (backed by Google cofounder Larry Page). Kitty Hawk’s Heaviside vehicle uses half the energy of a Tesla, is 35 decibels at cruising and has a 160km range at 290 km/h. Who needs traffic when you’re a billionaire?

Time for new tagline? Heads are rolling at Nuix over accusations of deception. This week CEO Rod Vawdrey agreed to step down and CFO Stephen Doyle was terminated “by mutual agreement.” Nuix missed its prospectus forecast, twice downgrading guidance since its hyped IPO in December. Then there are the reports of shoddy governance, dodgy accounting practice and stodgy culture. Plus, its former Chair is the subject of an Australian Federal Police (AFP) probe. Not exactly living up to its tagline, ‘Finding Truth in a Digital World.’

Now politicians are chiming in. A NSW senator questioned why ASIC failed to follow up with a whistleblower who detailed disclosure issues in the Nuix prospectus. The senator also suggested that, given she is the ex-General Counsel of Nuix’s biggest investor (Macquarie), Cathie Armour was conflicted in her role as ASIC Commissioner.

ASIC’s Chairman snapped back saying the regulator “isn’t there to warrant the truth of what’s in the prospectus, that’s the responsibility of the directors.” Not wrong. And as to the Commissioner’s conflict with Macquarie? “It was 8 years ago, alright. Let it go.” (Paraphrasing with reference to this highly-relevant NZ-famous bread ad). ASIC confirmed it has “a couple of [Nuix] inquiries ongoing.”

More CDN outages. Last week CDN Fastly brought down the internet. This week it was Akamai’s turn. CBA, Westpac, and ANZ, Australia Post and Virgin Australia were amongst the companies affected.

Trendy. Some trends in 2021: 1) International VCs swooping into Australia. 2) Institutional investors creep earlier and earlier into deals. 3) The rise of operator-community VC.

Fitting into trend 1 and 3 is The Fund, which was founded out of NY and this week launched in Australia. The Fund Australia aims to raise US$3.5m (AU$4.6m) from local startup founders and leaders. A bit of a side hustle, its investment committee is made up of Elicia McDonald (Principal, AirTree); Georgia Vidler (ex-Head of Product, Canva); Todd Deacon (MD, Techstars); and Adrian Peterson (Cofounder, Afterwork Ventures).

Investible raised $35m for its second fund. It aims to raise $50m in total. Its portfolio includes RentalHeroes, Work180, JigSpace, AirRobe and Bellabox. Top tip if you’re looking to raise from Investible, factor its Investibility Index into your pitch:

InstantScripts raised $10.9m led by Perennial. InstantScripts provides telehealth consultations and e-scripts for common medications. Scripts are checked over by a GP and sent to the customer’s pharmacy of choice.

Honey Insurance raised $15.5m from RACQ (the insurer is also underwriting Honey), PEXA, Metricon and others in “the biggest ever seed funding raise for an Australian tech company.” Honey uses data to simplify the process of applying for home and contents insurance. It also provides customers with smart home sensors, offering lower premiums if people take extra precautions on their security.

For our readers not deep into startup lingo: MVP = minimum viable product; PMF = product market fit (when your product reaches the point where it satisfies a strong market demand).

Europe’s most valuable private fintech. Klarna raised another US$639m led by SoftBank’s Vision Fund 2 at a whopping post-money valuation of $45.6bn (Afterpay’s market cap is a mere $25bn and US-listed Affirm’s is $18bn). What’s perhaps more staggering is the speed at which Klarna’s valuation is growing. It’s a 47.3% increase over Klarna’s post-money val of $31bn in early March, (it raised $1bn), and a 330% increase over its $10.6bn val from last September (it raised $650m).

The most valuable private US tech company. Stripe flexed its gunz in its keynote this week:

Want a piece of pre-IPO Stripe? Buy Shopify. Yup, Shopify along with Sequoia and other investors recently participated in a $1b secondary sale of Stripe shares ahead of a potential IPO this year.

Some of the first contributors to Future are:

The biggest solo VC. The Twenty Minute VC podcaster Harry Stebbings raised US$140m – one of the biggest funds run by a solo VC partner of all time.

The world’s most generous billionaire. While the world’s second richest man Jeff Bezos flies off to space, his ex-wife MacKenzie Scott is busy giving away a further US$2.7bn to “high-impact organizations in categories and communities that have been historically underfunded and overlooked” (that means an emphasis on racial justice, women’s rights and LGBTQ equality). In total, she has given away $8.5bn in no-strings-attached donations.

According to Scott, “It would be better if disproportionate wealth were not concentrated in a small number of hands.”

Previous article NSW will waive stamp duty on buying EVs and offer $3000 rebates – and wants the government fleet to be 100% electric by 2030
Next article After taking on Apple in a global legal fight, Epic Games now has Google in its sights in Australia
Via Advice
Tags Gavin AppelIgnition LaneRebecca Eastwoodweekly wrap