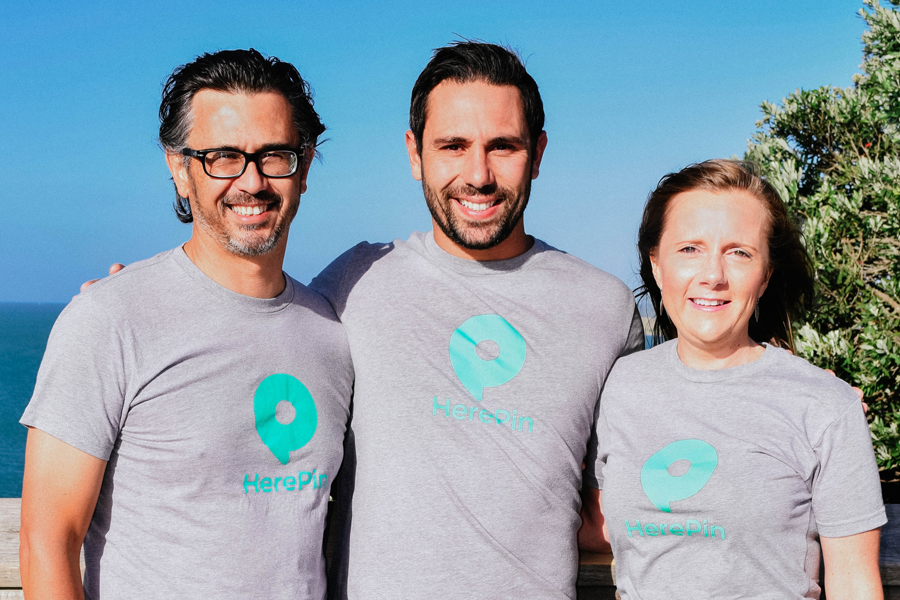 No matter where someone travels in the world now, it’s likely they’ll be slapped in the face with stores offering cheap SIM cards and free wifi-hotspots as soon as they step off the plane.

Merging the popularity of social media with the widespread dominance of mobile phones, the last few years have seen a number of startups developing ‘social travel’ apps looking to help connect people on the go.

One of these was Outbound, a Brisbane-founded app that allows travellers to find each other using search categories.

Another is Travello, a Facebook-style app allowing users across borders to connect, chat, plan trips, find events and engage with Youth Hostels.

Trimming a number of these features to instead focus solely on the Facebook-style social elements, HerePin is another social travel app looking to provide a more “organic” way for travellers and locals to interact.

The app uses a linear social feed, similar to Facebook and Twitter, that allows travellers to see an on-demand flow of other users in the local area, who are able to post short updates or statuses.

Based in New Zealand, the startup’s cofounder, Mark Bardi, said the app emerged from the experiences he had when backpacking across the globe for over a year, a factor which eventually led him to see the issues other social travel apps in the market held.

Having worked for a fintech startup in Silicon Valley for roughly four years, Bardi left the US to travel around the world without technology and meet other people.

The cofounder soon discovered, however, that even in places without abundant technology, that was a difficult task.

“All these travellers were hanging out in these common areas, like hostels and backpacker areas, who had all wanted and needed the same things, that being to meet people and find new places to go, but they were so consumed by their technologies and connecting back home. It was actually hard to meet someone as a sole traveller,” said Bardi.

Moving back to San Francisco, Bardi partnered with his cofounder – who had previously built the framework for a messaging app for local communities and suburbs – moved to New Zealand and begun developing HerePin.

“I went back to San Francisco and put together a business plan and tried to raise some money, but you know, everyone has an idea in San Francisco so things aren’t always worth much,” Bardi said.

Looking to what competitors in the space were doing, Bardi said he’d noticed that existing social travel solutions tended to suffer from “feature bloat”, where the user was able to do such a vast number of different things that they weren’t engaging with the core purpose or functionality anymore.

“There’s just so many things to do and you have so many options, but we find that humans don’t really engage with this bombardment of different things, it’s like diminishing returns I suppose,” explained Bardi.

Integrating with Facebook’s API, the app works by allowing travellers to log on using their Facebook account, which then integrates their information into their HerePin profile. Users are then able to set the location proximity they wish to search for people within, from a range as short as one kilometre.

“Another thing we noticed with other apps is trying to reduce the amount of content on the feed, so you can adjust your range based on where you are, so if you’re in a really isolated place you can extend it far,” said Bardi.

Bardi added that although travellers are the focus, locals are easily able to jump on the app too, to help recommend to travellers different locations or local businesses to visit.

Once logged in, users are able to access a “Twitter meets Facebook” style live feed which showcases what other travellers are doing or saying in that area, a feature which Bardi said is key to separating HerePin from its competitors.

“We noticed the model other used was a list format or search based, but we thought that kind of went across human behaviour, that’s not the way we meet people,” explained Bardi.

“You know it’s not meant to be Tinder for travel, where you judge someone based on your picture, so we came up with a more organic way to engage with people by creating this organic social feed.”

Similar to Travello and Outbound, travellers are also able to view other user profiles, receive push notifications and search different locations around them.

Since launching the full release of HerePin three weeks ago, Bardi said the user base has been increasing by roughly a hundred each day, having recently approached a total of almost 5000 users in New Zealand.

Now in Australia, Bardi said the startup is looking to spread the word about the app here using both online and offline marketing, as well as seek out investment opportunities.

Having bootstrapped the business with his cofounder, Bardi said he’s now looking to raise over $1 million in seed funding to help fund growth.

“We’ve currently been outsourcing development to the US, so it hasn’t exactly been a low cost provider,” said Bardi.

“Moving ahead we want to stay focused on our end user and build a product that can spread through word of mouth, between family and friends, so we get a healthy and organic growth with users that stick around.”