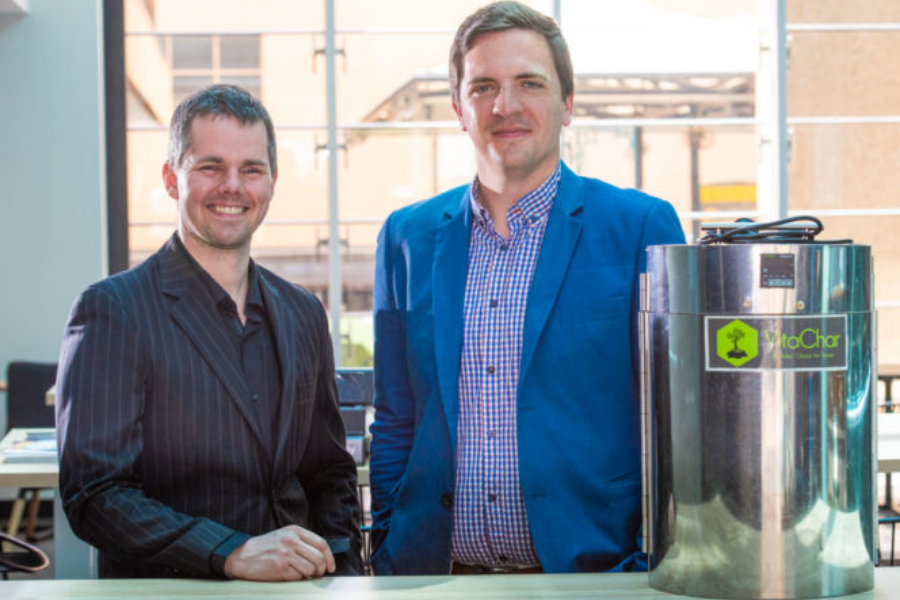 South Australian entrepreneurs Lewis Dunnigan and Benjamin Morton have invented a compost device that will turn organic waste into fertilizer within a matter of hours.

Their prototype, called VitaChar, won first prize at the University of Adelaide’s 2018 Australian eChallenge awards last week for most outstanding entrepreneurial venture of the year.

The device promises to reduce the amount of green waste that ends up in landfill and provide a simple, efficient alternative to traditional waste disposal processes.

“People are becoming more aware of the impact their waste has on the planet,” said VitaChar co-creator Lewis Dunnigan, who has a PhD in chemical engineering from the University of Adelaide.

“Before VitaChar a lot of the methods to recycle green waste were very time consuming and required a lot of effort and weren’t generally very pleasant.”

The VitaChar bins will convert green waste into fertilizer within two to three hours, providing an efficient alternative to traditional compost bins. The device is named after the organic charcoal-like material produced by the bins.

The device is also a carbon negative alternative to traditional compost practices.

“When the green waste that we put into the VitaChar bins grows, it gets its carbon from the CO2 in the air. We convert that carbon in the plant into a really stable form that lasts for thousands of years. So essentially there’s a net reduction in atmospheric carbon dioxide,” said Dunnigan.

“When we do the comparison of how much CO2 we save, we can compare it to if that waste went to landfill, which then decomposes into methane, a potent greenhouse gas.”

The first VitaChar bins are set to be released in Adelaide early next year, introduced to the market initially for restaurants who have large green waste disposal needs.

“If you’re a restaurant you’ll save money on your green waste disposal fees. When you use one of our bins and you turn waste into the char product, you reduce the volume of the waste by 50 per cent, by doing that you can start saving on waste collection pickups.”

The commercial bins will be followed by specialised devices for households, allowing consumers to produce their own fertilizer at the press of a button.

“We want to hook it up to an app so people can check how long is left, how much greenhouse gases they’ve saved and it will give them that sense they’re doing something good for the environment,” said Dunnigan.

Previous article South Australian startup Secure Nest aims to make schema therapy more accessible
Next article “When you have a team that is all the same, you get bad results”: why diversity must be more than gender
Via Advice
Tags