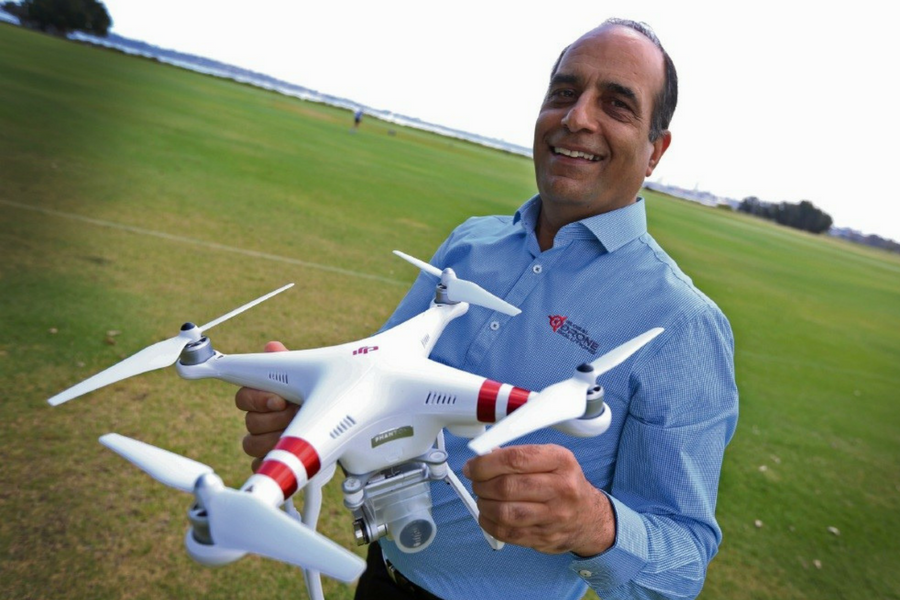 It is bewildering that the average Australian can now purchase drones, a technology that was once only available in stealth military operations, simply by strolling down to their local JB HI FI.

Thanks to their commercial availability, the technology has become an increasingly popular choice for businesses to innovate new ways to offer a service (I’m looking at you, Domino’s pizza delivery drone.

For businesses, however, earning accreditation under Australia’s Civil Aviation Safety Authority (CASA) regulations to actually fly a drone can be a headache, and even then it doesn’t guarantee that you’ll know how to effectively pilot the technology or apply it to your business.

Training existing and upcoming businesses with the knowledge to fly drones and apply them to their work is Perth drone training startup Global Drone Solutions.

Launched by Mahmood Hussein, former CEO of automotive distributor Turbotech, the CASA-approved startup has been training employees from small to large businesses to become drone pilots.

The business, which has now been in operation over two years, covers the fourteen modules that CASA requires pilots to learn in the span of a five days. Candidates learn about drone safety regulations and basic aeronautical knowledge, which takes up three and a half days.

The final day and a half is reserved for practical knowledge, where students practice flying drones before spending the final day learning how to apply what they’ve learnt to their businesses.

After completing an English proficiency test, graduates earn their licence as a drone pilot, for the cost of $2970.

While the price may appear steep, Hussein said that he set the course price based on the “competitive market” of drone training. The startup founder added that there are currently three to four other drone training organisations in Perth alone, although only his businesses and one other actively market themselves.

As the commercial prices for drones slowly decrease, larger scale businesses are drawing progressively closer to adopting drone technology, particularly amongst delivery services. In response, the number of academies in the market that train drone pilots is on the rise.

“There are about 300 drone pilots in Australia and 23 training academies, although that number is increasing,” Hussein said.

Recognising the startup needed to compete in areas other than pricing, the founder looked at the drone training market and noticed that startups who passed through drone courses were leaving without any idea of how to effectively apply the technology to their business and grow their business.

“That’s what missing from the industry from a training point of view. Some schools do six days, but the person is left not knowing how to make that knowledge into something,” Hussein said.

“The advantage of our training company is that we add on a module about what to do to set up a drone business. And people love it, because now they’re being trained about how to get out and market their business, get funding and all that.”

Discussing the issues startups face trying to grow, the Global Drone Solutions founder pointed to the difficulties these businesses encounter when attempting to earn funding and market their business.

To help ease this process, following the training course Global Drone Solutions offers free consultations for its graduates to help mentor them with growing their business with drone technology.

The remaining 50 percent of the startup’s clients comes from large mining and oil companies;  Hussein said this was the first type of industry to adopt drones in Perth, as companies use technology for surveying areas and producing data.

“It started to get traction about three years ago starting with a mining company who realised they could reduce their cost by 40 or 50 percent easily and make the job safer by taking people out of the mine pit and replacing them with drones,” said Hussein.

Global Drones Solutions also started gaining traction around this time, as the business was able to shoot towards a solid financial state after being bootstrapped by Hussein.

The founder didn’t express any plans to seek investment opportunities in the future; instead Hussein said the company’s success is linked to the growing and “phenomenal” drone industry.

“We’re at that stage now where drones are getting very good tractions in a lot of industries. New people are finding new applications for drones,” Hussein said.

“In Perth we have a lot of oil companies that want to learn how to fly drones for when they set up new platforms in the ocean. They send the drone up and down to check the migration of sea mammals, sharks and whales to see what effect that building will have.”

Drones have the potential to work in non-commercial industries too, as numerous lifesaving and sea-rescue organisations across Australia have explored the use of the technology in emergency situations.

“The state government has also begun to use drones for shark detection in Sydney,” Hussein added.

The Global Drones Solutions founder said he’s currently in talks with a company on the east coast of Australia to kickstart a new training location, while he is also looking to international expansion.