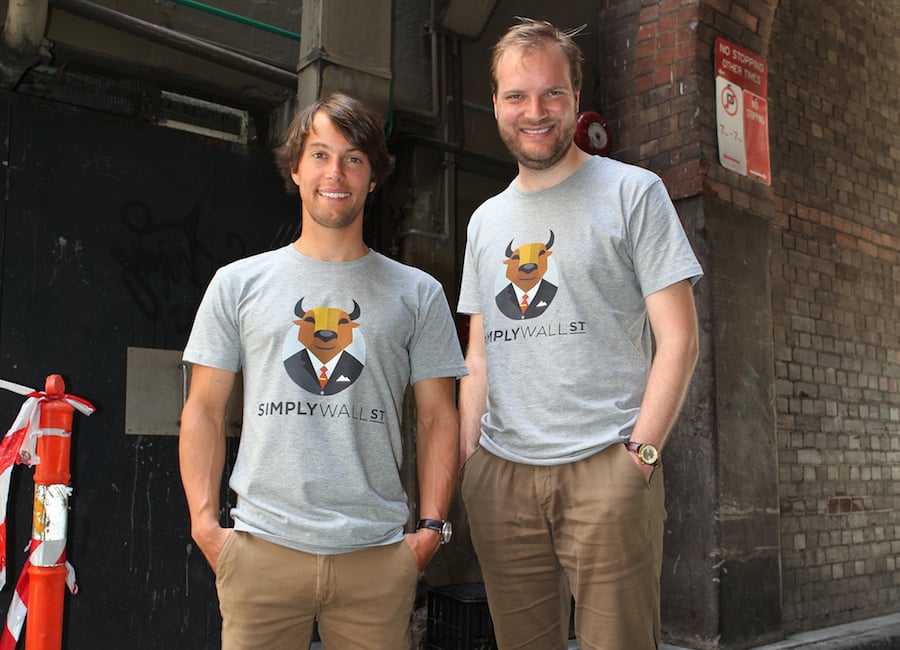 The global stock market is worth between $35 and $40 trillion, according to some estimates. So investing in stocks clearly has high stakes, and to many investors, the profit potentials make it well worth the risks. But if you’re like most people, the stock market is no less than confusing. There are too many numbers, abbreviations and contradictory explanations as to why stock values fluctuate from day to day.

Entrepreneurs Al Bentley and Nick van den Berg were just as lost when trying to decode the stock market enigma, which is why they decided it was time for a startup-style intervention. Launched last month, their FinTech startup Simply Wall St was designed to make the stock market easier to navigate for Gen-Y investors who are new to the game.

Simply Wall St began its life as one of Bentley’s side projects. After a serendipitous meeting in Perth, the co-founders realised they had a few things in common: they were both self-taught stock investors who had a painful, mistake-ridden experience when investing in stock for the first time. After being accepted into AWI Ventures’ FinTech accelerator in July this year, the duo decided to commit themselves fully to Simply Wall St.

Fast forward four months, and what we see today is a web-based visual investing application that has a Pinterest-like vibe and is designed for novice investors. Although the app was only launched on November 11th, the startup has seen more than 3,800 sign-ups from the US, Canada and Australia.

What makes the app unique to other stock market ‘decoders’ out there is its heavy focus on visuals. Rather than presenting numbers, spreadsheets and graphs, Simply Wall St presents a ‘snowflake’ (see below), which encompasses five key variables: income, value, future, past and health. Inside the snowflake is a blob, whose shape depends on these variables. When you hover your mouse over different parts of the snowflake, a box pops up providing a rating out of six for each variable.

Bentley says, “we don’t even show share price upfront (we do account for it though!), so the experience is very different to existing similar apps and websites. We also believe that long term investing is actually fairly simple if people can be given and understand the right information.”

The purpose of keeping it visual is to empower investors to manage their share investments instead of paying someone else to do it for them. One of the main reasons why advisors and fund managers are able to charge exorbitant fees is because there is very little decipherable information available to investors.

Bentley is cognisant of the fact that there are many other competitors operating in the same space – like StockDoctor, StocksinValue, Skaffold and StockLight. He points out, however, that these players aren’t as easy to use as they appear.

“I can guarantee if you put a complete newcomer in front of them they will have no idea what is going on (we know, we tested it!). The cost of most of them is also prohibitive for the majority of retail investors (up to $2,000 per year),” says Bentley.

He adds that these applications “only scratch the surface” when it comes to data visualisation and simplification.

“They attempt some data visualisation, and some have nice UI’s, however as soon as you dig deeper the complicated traditional approach appears and users are bamboozled with data – often this is because they were created for an experienced investor. There are already pre-conceptions on what information needs to be presented and how,” says Bentley.

“So the main differentiator is that right from the start we designed and built Simply Wall St to be understandable by everyone – including beginner investors. Funnily enough we now have phone calls from stock brokers wanting to use it simply because of the visual appeal.”

For the first-time visitor, Simply Wall St works loosely as follows, depending on whether you specify you’re a ‘beginner’ or ‘experienced investor’. The default landing page is Simply Wall St’s Pinterest style ‘grid’ of snowflakes. This dives users straight into exploring the market in a new visual way.

Simply Wall St offers different ‘views’ based on what filters the user chooses – filters include ‘Companies suitable for your first investment’, ‘Companies that pay a dividend which beats your savings account’, ‘Companies with high growth expectations’ and many more. Users can then add companies they like to their watch list, or dive in for more detail.

The startup will be integrating a referral system into the app, so that if a user finds a company they are interested in investing in, they can click ‘Invest’ and Simply Wall St will direct them to an online broker.

Bentley attributes Simply Wall St’s initial traction to an article published on the Australian Financial Review during the startup’s official launch: “[it] was perfect to create awareness in the local tech and investment community. It was important for us to get local PR coverage initially due to the stage we are at with the business.”

But since then, Bentley insists the startup’s growth has been organic. Simply Wall St ended up on the front page of Reddit – a huge achievement given it’s based on a voting system.

“Getting on the front page, even just for a few hours, resulted in the app cropping up on a bunch of other sites like Product Hunt,” says Bentley.

Simply Wall St’s revenue model will work similarly to LinkedIn, in that there will always be a free version that works for the majority of users, but there will be a ‘pro’ version that includes premium features and limited free brokerage. Bentley says they’re also working on an enterprise version of Simply Wall St that allows organisations like stock brokerages and financial planners to white label and distribute the startup’s content to their clients.

At the moment though, Simply Wall St is raising another seed round to finance additional development, so monetisation and marketing isn’t a primary focus at the moment.

Bentley says he’s ‘super stoked’ by the startup’s initial traction, recalling a time the co-founders checked their analytics and saw 250 concurrent users on the platform, which ramped up to almost 1,000. They even thought they’d been hacked.

“You always hear of startups who spend ages setting up their servers for massive load, launch and then a tumble weed rolls past. However, our decision to prepare the site for this from the start was definitely the right one,” says Bentley.

By the end of 2015, the startup wants users to be able to buy and sell shares inside the app, as well as be available on more stock exchanges globally. Simply Wall St also wants to set up local teams in the UK and US in addition to Australia.

On a final note, Bentley likens FinTech to 3D printing, saying “you know it’s going to be massive, it’s just a question of when and how fast.”

“It would be good for Sydney to make the most of the opportunity; it has to become a hub for Asia.”