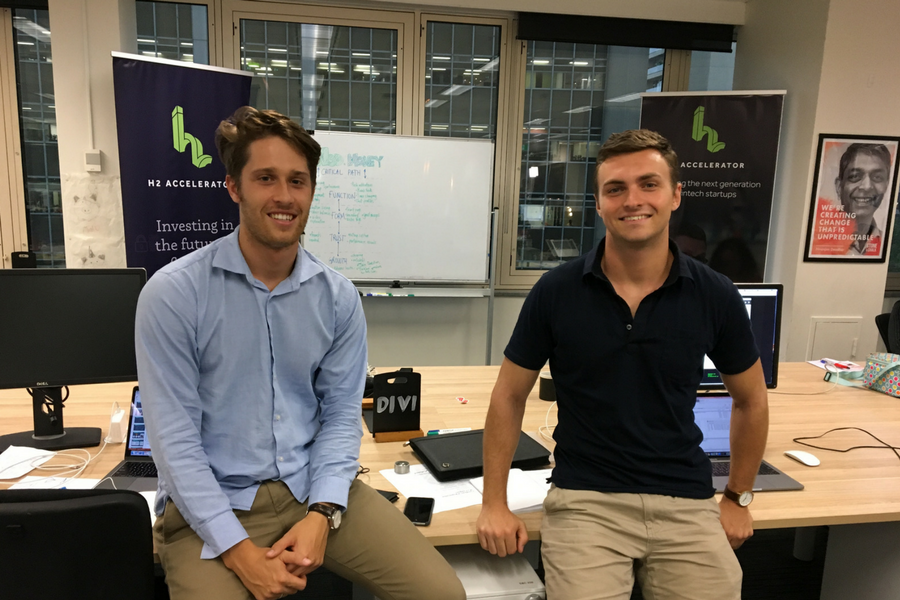 Australian consumers seemingly loves their fintech, with a report released by EY earlier this week ranking Australia fifth globally for adoption of fintech services and products among its ‘digitally active’ population, with money transfer and payment services in particular popular locally.

When it comes to payment splitting apps, though, it would be hard to classify any in the market as a leader. Unlike say, Venmo, in the US, many Australian consumers are simply used to inputting each other’s bank details into their own banking app and transferring funds that way.

Looking to be that leading app is Sydney’s DiviPay, originally born out of another idea founders Daniel Kniaz and Russell Martin were testing out. With both having worked at Westpac, Kniaz said they “had an idea of what the future of payments could look like”.

They started prototyping an “invisible payments system”, similar to the Uber payment experience, he explained, but received feedback on customers that told them the greatest pain points still lie in group payments and bill splitting, whether it be a restaurant bill, utility bills to split between housemates, or accommodation on a group trip.

“The tipping point for us was after a trip we made with some friends. We had a number of shared expenses over the trip and with a large group we resorted to creating these long and complicated spreadsheets to reconcile what everyone owed,” Kniaz explained.

“The most burdensome part of the process was a few people were significantly left out of pocket and it took weeks of hassling friends to finally get paid back in full. Good timing and the convergence of some relatively new technologies made us think we could finally solve this issue once and for all.”

After downloading the app, a user registers an account and then selects a payment method by inputting their card or bank account details. From there, they create a group and invite friends to it, and then top up a virtual card with funds in order to pay for an expense, with the money drawn automatically from each group member either evenly or by item.

The transaction itself can be completed by entering the virtual card numbers in an online checkout, with mobile payment functionality in the pipeline.

The startup, which was earlier this year accepted into the latest H2 Accelerator cohort, is looking to target millennials, dividing them into three core segments.

As Kniaz explained, there are the young couples who may not be quite ready to commit to a traditional joint bank account but have a lot of shared expenses; young professionals who socialise regularly with friends and colleagues and often have multiple shared expenses with housemates; and university students who are actively apart of uni groups and social activities but often don’t have large reserves of cash lying in their bank account to cover expenses for their friends.

The startup has been growing its user base through social media, while the fact users must invite friends to the app in order to use it also bringing numbers on board.

According to Kniaz, over two weeks of building a pre-launch sign up list DiviPay had over 1,000 registrations; through its pilot, they saw groups sharing expenses around three to four times a week, on average.

Because of its virtual card set up, DiviPay doesn’t require integration on the merchant side – something that has held up other group payment apps up in the past.

“Unlike peer to peer services, DiviPay allows users to actually make a payment directly to the merchant. As a result, no single person is forced to cover the cost and hassle their friends for repayment,” Kniaz said.

“Not having to integrate with merchants is one of our biggest competitive advantages. Utilising existing payment networks and infrastructure means that we can be used absolutely anywhere across any vertical, globally.”

Another startup making its way into this space is Splitr, cofounded by Dave Shurey and Stuart O’Connell after a drunken dinner in New York.

“I remember thinking, we’ve got powerful calculators, online payments, and cameras in our pockets, why isn’t there an app that lets you quickly take a photo and split up a bill on the spot? As a robotic engineer I had studied how computers see images and knew that text could be digitised from photos,” Shurey explained.

“The final catalyst that gave me the nudge was, in a house of 5 people, having to awkwardly knock on a housemates door that I didn’t know that well and ask for money for a electricity bill. It was quite awkward and I ended up around $500 out of pocket because I wasn’t tracking the payments correctly and I thought, might as well give this a shot.”

With his other housemate, O’Connell, having just launched his first app, Shurey thought he might be interested in creating another, and they got to work on Splitr.

The app works by having a user take a picture of a bill with their phone, check the total, and then add their friends. They can then either split the bill evenly or by item, with the app then tracking who has paid for what. The app collects payments via card, depositing the funds into the nominated user’s bank account.

Like DiviPay and most other apps in this market, Splitr is broadly aimed at 18 to 35 year olds

“They have different living arrangements, some are married, some live at home and some live in share accommodation…in the end, they all have had a similar experience with trying to share the cost of living and enjoying life and all have a strong sense of fairness,” Shurey said.

Shurey sees the app’s appeal as broad given it too is not reliant on merchant integrations, and can work beyond the restaurant space. Features in the development pipeline include group payments, and the ability to process multiple currencies and foreign exchange.