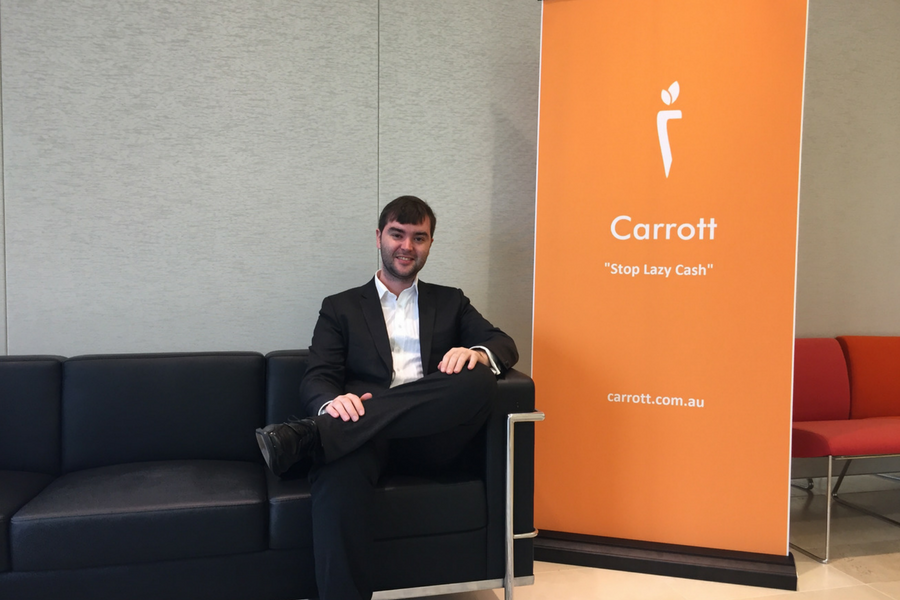 In this ‘tap-and-go’ era, where access to the speed and simplicity of PayPass and cardless transactions is an expectation, seeing or hearing the phrase ‘cash only’ in a store or cafe is enough to get one annoyed.

There is, however, a challenge with the tap-and-go model, whereby creating a budget and sticking to it isn’t always straightforward. There’s no ‘physical’ limit to how much is in your wallet and it only takes a second to spend a little extra, meaning we’re more likely tack on that not-so-necessary side of chips at the end of food orders.

To help people budget their earnings and encourage them to save, Sydney startup Carrott has developed an active cash management app which focuses on educating users about how to make the most of their bank account funds.

The app identifies any ‘lazy cash’ lying around in a bank account before prompting users to transfer funds to a savings account. Carrott will also analyse an account to identify how close a user is to their daily spending budget, and will inform them if they’re close to reaching their cap.

“I was charged overdrawing fees on my account because of a large direct debit which was conducted three days early,” Raftery recounted.

“Additionally, during my time working in a retail banking, I noticed this recurring problem where more and more young people would deposit their salary into their transactions account, without a savings plan. So with no savings plan and only a couple thousand dollars in their transactional account, they weren’t earning any interest.”

With these experiences in mind, Raftery said he began imagining a way to solve the issue during a brainstorming session for the 2016 Innovation Competition hosted by IBISWorld and the University of Technology Sydney.

Through Carrott’s informative push-notification functionality, Raftery seeks to promote financial literacy and get users understanding more about their money and how it can work for them.

“In Australia, the majority of personal financial education is conducted by the big banks in primary schools, and people usually only seek further information when brought on by a special event, such as buying a property, getting married or having a baby,” said Raftery.

“Carrott’s tagline is ‘Stop Lazy Cash’, a meaning that goes deeper than the physical cash, and is about empowering an individual to become more financially literate.”

To Raftery, “lazy cash” means any funds in a consumer’s transactional bank account that remain unused after their core expenses. The founder added that lazy cash is something that exists more nowadays, thanks to the nature of modern spending.

“In the tap-and-go generation consumers make purchases on their debit card, so therefore they make payment deposits directly to this transactional account, meaning lazy cash is more likely to sit around,” Raftery said.

“As a result, more and more banks say clients aren’t saving on a regular basis, nor utilising these funds effectively in general.”

Once on the app, users are able to connect their bank data to the platform as captured by a third-party provider, which Raftery said currently supports most of Australia’s banks. Users then input a budget amount for themselves, so the platform can notify them they’re close to their spending limit, while Carrott’s algorithm crunches an account’s data to detect if any lazy cash exists.

“The API refreshes the bank data and then runs it against three user driven rules, daily budget, lower threshold, and upper threshold, better known as the lazy cash limit. Depending on the results, the user may receive a notification on their device to suggest action be taken,” explained Raftery.

Both downloading and using Carrott comes free to users; Raftery said the service is free to further its educational purpose, while also serving as a “cashless demonstration” for a future project to potential investors.

Within the pipeline of projects for the startup is another app, currently dubbed ‘Project Savannah’, which Raftery explained will allow users to the opportunity to invest their lazy cash once it’s been identified.

To support the startup’s development of a new paid model, Raftery said the business has recently begun raising its first round of seed funding.