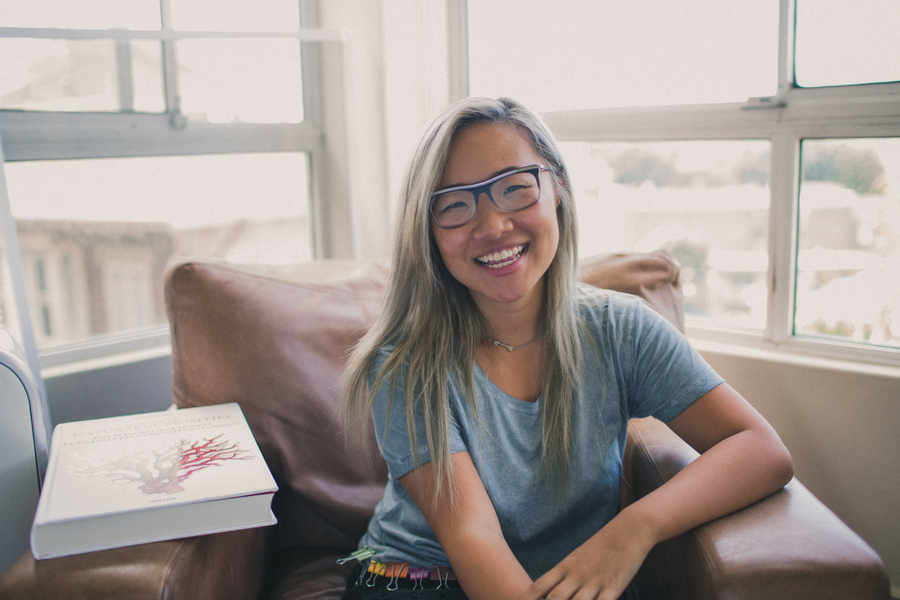 It may not always get the attention, but Australia’s fashiontech landscape is producing a wealth of interesting startups. From Shoes of Prey and Fame and Partners, now scoring deals with retail giants in the US, to up and comers like HUMM and those emerging out of Creative3’s programs, our fashiontech startups are looking to change the way people think about fashion and how the business of fashion runs.

The latest to join the pack is Sydney’s Lustr. Currently in beta, the Lustr platform wants to connect fashion-forward shoppers directly to emerging designers through a matchmaking algorithm. As well as helping shoppers discover new, independent labels they otherwise may not have found, it also gives designers the ability to crowdsource feedback on potential designs, helping them get a feel for the market before going into production.

Angela Liang, cofounder and CEO, came to the fashion scene from the investment banking space, having worked in Deutsche Bank’s M&A team in Hong Kong. In her second career as a creative director and professional stylist, Liang said she noticed both designers and consumers were facing problems that could be solved by bringing them closer together.

Emerging designers can’t grow their sales because they can’t identify and connect to their target shoppers, Liang explained. These designers are drowning in a sea of big brands and online marketplaces with which they can’t compete, while these marketplaces can also overwhelm fashion-forward shoppers. For these shoppers wanting to find something unique or support emerging designers, finding the unique can be difficult and time-consuming.

“Frankly, I got sick of hearing the same issues all the time, and from my external point of view – since I did not come from any fashion background – I observed a lot of ‘old school’, entrenched expectations of how to do business in fashion, and thought it made no sense. I came up with a few ideas and looked into the fashion tech options available, but couldn’t find anything that was doing exactly what I wanted to do,” Liang said.

Liang loves fashion and the creativity behind it, she said, but hated the close-mindedness of many of the so-called gatekeepers in the market, from retailers to PRs to fashion publications. The issue of gatekeeping in fashion is a big one: just this week Vogue published a roundtable where its editors railed against the rise of fashion bloggers and their ‘paid to wear’ outfits – nevermind that the lines between advertorial/editorial in the likes of Vogue and other fashion publications have always been a little blurred.

“I wanted to be able to help these designers, a lot of whom had become really close friends, in a way that was bigger than just me, as one person, giving advice over coffee,” Liang explained.

“I realised that it was only through building a community of engaged fashion-lovers that we could hope to boost individual emerging designers. I liken it to the music model: record stores have given way to the likes of iTunes and Spotify, where the artists are directly in touch with their listeners.”

Having come up with the idea for Lustr a while back, Liang was pushed to bring it to life at an AngelHack hackathon in Sydney a few months ago.

After pitching her idea to the room, she had one person wanting to join her team. Knowing they couldn’t put together a prototype in 24 hours with just two people, she said they were about to head home before they saw another twosome and joined up.

The team of Liang, COO Liliana Ructtinger, chief architect Jeremy Vista, and design thinker Sacha Pantschenko took out the top prize, a place in AngelHack’s global Hackcelerator program to take their product beyond the prototype stage.

“Normally, I would want to get to know people very well before deciding to become business partners, however the team worked so well in a high-pressure 24 hours, and this was an opportunity none of us wanted to pass on,” Liang said.

Now eight weeks into the program, the Lustr team has been mentored by Ryan Liddle, former head of innovations at Woolworths, and brought on advisors with senior experience at companies including Myer and David Jones.

Through its market research interviews and conversations with Liddle and advisors, Lustr made the decision to pivot. It had started out as a B2B model, connecting designers to the relevant retailers, but decided one week before its MVP was due to be handed in to the Hackcelerator judges to switch to a B2C model.

For designers, the app will work by signing on and filling in an initial style profile and general profile with images and other relevant information, including a link to their own online store. They can create polls if they want to crowdsource opinions from shoppers, and view analytics on interactions users have had with their profile. Currently in development are features allowing designers to list VIP offers to shoppers and listing products for pre-sale directly through Lustr.

Shoppers, meanwhile, create a style profile and from there can view designers they have been matched with based on their profile, and of course browse the full range of Lustr designers from which they can shop, while also taking part in their polls.

The crowdsourcing of opinions is a particularly interesting feature – it could perhaps be seen as stifling a designer’s inherent creativity, but Liang said it was a feature she thought necessary after her time spent working with designers.

“They would design, produce, and sell a collection and then realise, for example, that only 5 out of 20 pieces are selling well. Customers love some pieces and hate others. Designers only get this feedback when it’s too late, and they’ve already spent all the capital and are now stuck with the inventory. There is a huge amount of risk involved with every collection as they are essentially predicting customer sentiment six months in advance,” Liang explained.

“Designers, as creatives, don’t think about customer data almost 100 percent of the time. In reality, they have to understand their customer. Customer understanding drives better product design and sales. Of course, there’s a huge element of ‘I’m going to design what I want to’ anyway, but to grow their business, they have to make sales, otherwise it’s just a very expensive hobby.”

Liang said designers jumped on the idea, something they had never thought to do themselves or had not had the time to do. For shoppers, meanwhile, Liang believes the feature will give them the feeling that they are shaping the landscape of emerging fashion, while also showing them how their support can push emerging designers forward.

Looking to revenue, Lustr will work through a freemium membership model for designers while free for shoppers. Lustr will receive a commission on sales through the platform and referral fees on affiliate click-through sales, while the shopper data analysis product will also be available to designers.

The startup is looking to target emerging designers, those who have been in operation for one to five years, across all categories. Liang’s existing network has enabled Lustr to onboard 70 early adopters in its initial beta.

On the shopper side, the startup is targeting young women, the aspirational fashion lovers aged around 18-25 to fashion lovers with more disposable income around 10 years older. Trend-savvy men, too, are of course welcome. Liang said over 300 shoppers have registered their interest.

The next few months will be busy for the startup, which this week found it was selected to take part in AngelHack’s Hackcelerator demo day in Silicon Valley in November. Of the program’s 40 or so global participants, just a handful are selected to pitch in the US each batch.

Beyond the pitch, Liang said it’s all about growing the user base and gaining traction.