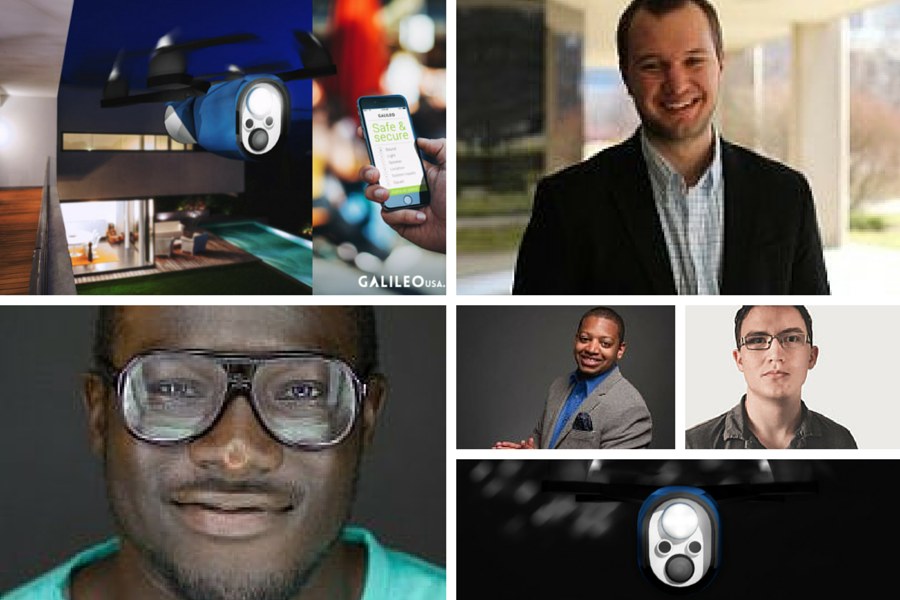 The notion that drones will become as pervasive as software is sounding less absurd every day. Drone technology is making its way into industries we never before imagined like package delivery, real estate and construction, photography and film, and agriculture. According to an infographic sponsored by the Government of UAE, the projected economic value of the civilian drone industry will be between US$8 billion to $10 billion by 2025. By then, more than 100,000 international jobs are also expected to be created. Although drone technology has been used in rapid response and emergency services, as well as law enforcement, it hasn’t yet been used for home, property and business security. This is where Galileo comes in.

Galileo, a drone startup based out of Southern California, was founded late last year by Josh Sanabria (CEO, Product Architect), Rodney Allen II (COO, CFO), Ben Quartey (CTO, Software Architect) and Christopher Bannister (CMO, Investor Relations). Galileo Alpha, the company’s first commercial offering, can be described as a ‘drone security guard’. However, this does not do the technology justice.

More specifically, the Galileo Alpha is a modern smart drone with advanced sensors that protects the user’s home, property, and business. When an alarm goes off or a routine check is required, the Alpha flies autonomously inside the user’s property and lets the user know what is happening from every angle, by streaming video, audio, and sensor data to the user’s smartphone and home security provider. The Alpha is always on duty, sensing motion and changes in the environment. This is helped by the fact that it wirelessly charges on its base station, so it never switches off. The Alpha can also integrate with smart home devices like Google Nest.

“This ability to respond intelligently and quickly to alerts will reduce false alarms, heighten awareness, and set a new standard for both home and property security,” said Allen.

The problem that Galileo is trying to solve is the subsequent cost of false alarms. Allen told Startup Daily that 97 percent of policy responses to home security alarms are false alarms, costing homeowners and taxpayers millions of dollars every year in fines and wasted resources. Added to that, often home security cameras don’t record audio and have limited viewing angles – usually requiring multiple cameras to be placed in multiple areas to capture concrete footage

“What makes our product amazing is that we have created a device that will essentially end this problem,” said Allen.

The startup’s vision, however, seems to be far bigger and far more audacious. Galileo’s mission is to create drones that enhance human life; and it is this mission that inspired the creation of the Alpha home security drone.

Allen said they realised drone technology was being used primarily for aerial photography and videography – the Lily Camera is an example – and felt it had far more potential.

“While these are exciting applications, we feel drones can and should be used for so much more. It all started with the question: What if drones could do more than carry a GoPro? This idea inspired our team to start Galileo, and search for other uses and implications of drone technology,” said Allen.

The startup is unaware of any drone competitors operating in the security industry, and so it’s likely that Galileo has the first-mover advantage.

“The Alpha … is more than a flying camera. It is a complete safety solution that integrates with smart home devices and your existing security system to secure your home. We believe Alpha is the solution that will essentially eliminate false alarms,” said Allen.

According to research and consulting firm MarketsandMarkets, the global market for home security solutions is expected to reach over $34 billion by 2017, growing at a compound annual growth rate of 9.1 percent from 2012 to 2017. In addition to selling the Alpha through its own website, Galileo’s growth strategy is to sell through security partners. This means getting security providers in the US to purchase the Alpha at a wholesale price and offer it to customers as an upgrade to monthly contracts.

Allen said the company is already discussing partnerships with some of the biggest security providers in the US. Once those partnerships are secured, Galileo will be able to tap into those providers’ customers and scale accordingly.

Though a majority of the R&D has been self-funded, Galileo is in the process of raising a seed round to help the company move to the next stage of mass production and commercialisation. Galileo will launch a crowdfunding campaign for the Alpha on Indiegogo later this year.

Though the company isn’t certain about its target, it expects to make $1.1 million in pre-sales during the Indiegogo campaign; and the primary goal of the campaign will be to secure enough financing for the plastic production moulds necessary for the final Alpha product.

Talking from personal experience, Allen said the biggest challenge for any startup is refining a product without losing sight of why the company was started in the first place.

“Many obstacles will present themselves along the way that seek to distract you. It is important that you maintain a mission-focused approach when facing and resolving these issues,” said Allen.

He also identified fundraising as a challenge, adding that it’s important for founders to expand their personal networks because a lot of times funding comes from friends of friends and other acquaintances.

“Also, research what prominent angel groups are located in your area and reach out to these groups. Even if an angel group decides not to invest in your company, you will gain a lot of valuable insights by presenting to these groups and seeing how they respond to your business plan and product,” Allen added.

Perseverance is critical to securing funds and moving product development forward, according to Allen. He pointed out that founders are going to hear a lot of NOs before they their first YES, but this shouldn’t discourage them.

“It’s important to keep making progress every day, even if it’s small,” he said.

As drones become more and more mainstream throughout the world, Galileo won’t be the only startup big companies keep an eye on.

Also, some of the world’s hottest drone startups are raising eye-watering amounts of money, which goes to show that investors are interested in drone innovation. According to CB Insights’ data, investment in 2014 to the drone industry topped $108 million across 29 deals. Its data also found that funding of drone technology increased 104 percent year-over-year over the past few years.

Earlier this year, China-based aerial drone maker DJI raised $75 million from Accel Partners at a valuation of $8 billion. 3D Robotics raised a total of $64.7 million. Skycatch is also attracting industry attention for the use of its drones and software to monitor construction project sites, and is close to reaching $30 million in funding.

By 2020, the top five industries using drones has been predicted to be pollination, personal security, medical in-body drones, asteroid prospecting and planetary science and action sports photography. It seems Galileo is leading the way when it comes to personal and business security.

The Galileo Alpha will available to the broader market in late 2016.