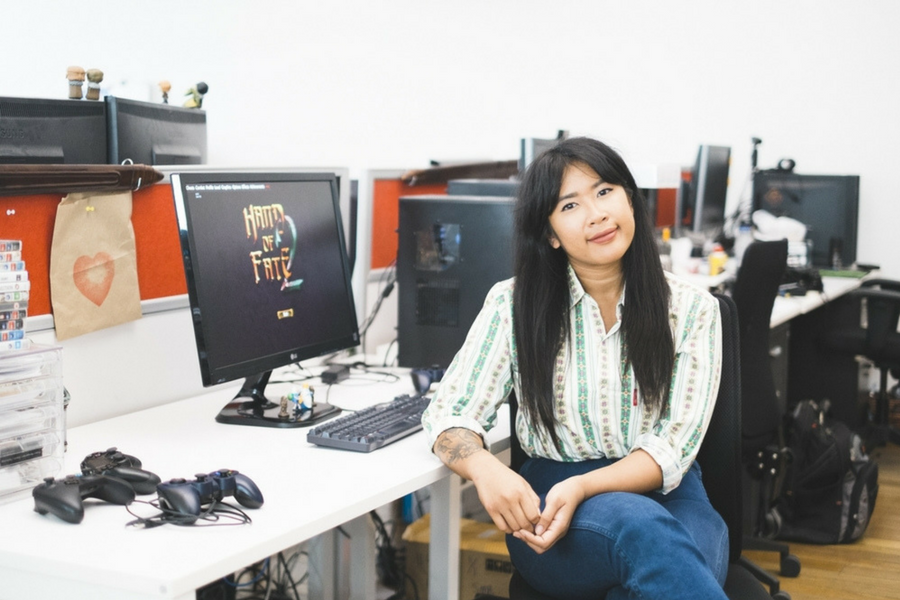 Describing it as an “innovative” technological industry that will help build a “strong and viable Australian export sector”, a report released late last year identified Australia’s game development sector as one ripe for growth, predicting it to expand alongside a US$98 billion global industry in the next two years.

Speaking to Startup Daily ahead of the event, Allom shed light on how lack of government support and funding opportunities are restricting the emergence of new startups in the space.

“There is a place where government funds should be available to kickstart a project so you can then access a funding by other means, but there really isn’t enough there,” she said.

As a producer for Defiant Development, Allom is well immersed in the industry as well as the development of projects, acting as both a promoter and marketer, a team manager, and sometimes even a “therapist”, she joked.

“It’s kind of like a glorified way of saying project manager. The goal is to make sure the team is working on the most important thing, but not at the expense of quality of product or quality of life,” Allom explained.

The startup itself has been around for a number of years, working on external, contract-based projects before shifting towards the development of its own intellectual property (IP), including its flagship title Hand of Fate.

Released in 2015 on Xbox, Playstation, and computer (PC) platforms, the card-cross-action game has had over 2.5 million purchased downloads to date, with the startup now moving to work on the sequel, Hand of Fate 2.

While the business found success with the release, Allom explained that getting the IP out to market was not an simple or fast path, but rather one than took roughly 18 months with a team of over 10 people. Funding for the project came from a grant from Screen Australia, internal funding from prior projects, and a Kickstarter campaign.

“We’re actually one of, if not the first Australian game development company, to successfully pull off a Kickstarter campaign,” she said.

Looking at other small-scale startups working in the space, Allom said a lot aren’t able to successfully reach the crowdfunding target and continue project development, an issue that is accentuated by the lack of other funding opportunities available.

According to Allom, aside from a handful of grants from Screen Australia, which themselves are shared amongst other creative media projects, there are precious little other grants, accelerators, incubators or private funding opportunities out there targeted at supporting game development startups.

As a result, Allom said the gaming startup community has looked to support to each other instead.

“Local gaming developers that are successful and have grown larger are actually funding each other now. There are also events like Game Jam where the leaders in the space give a lot of mentoring support, which can sometimes be more beneficial than monetary support,” she said.

“Unless you’re from Melbourne, which has a pretty extensive funding model thanks to FilmVic, which funds all sorts of projects including gaming, you pretty much have to source funding yourself.”

While government and other organisations are looking to take steps towards developing initiatives to support the industry, Allom said that although a lot does gets talked about, “not a lot happens”.

The last government initiative emerged in 2012, when the Labor Government introduced the Interactive Games Fund to help gaming startups kick their project off the ground.

A Senate inquiry investigating the future of Australia’s game development industry launched in 2015 handed down its report in April last year, putting forth a number of recommendations to grow the industry. No Federal action has been taken to date, however.

Allom believes the funding issue is part of the reason a number of Australia’s gaming startups have been working with mobile app titles in the last few years, which are generally cheaper to make thanks to their shorter development time and the ability to see “how things are progressing early on”.

A survey from the Interaction Games & Entertainment Association and Games Development Association of Australia issued to local game developer startups showed that majority received their income from iOS and Android platforms, with PC following closely behind.

According to Allom, however, there is now a shift away from mobile titles towards PC and console platforms.

“There is now a change in the landscape where developers are starting to move away from mobile to other platforms, which can probably be attributed to a lot of saturation in the mobile market,” she said.

“There’s now also a lot of sub-support from Microsoft and Sony for smaller developers. Microsoft in particular has a lot of promotion opportunities available to get a product out there.”

Looking to empower new startups in the space, Microsoft also launched the ID@Xbox program in 2014, which offers developers free access to two modern dev-kits or softwares, the same that are used to construct big-title games.

This year the company also announced that it will be launching another program dubbed ‘Xbox Live Creators’, that will streamline a developer’s ability to implement features that allow players to game together online for a one-time cost.