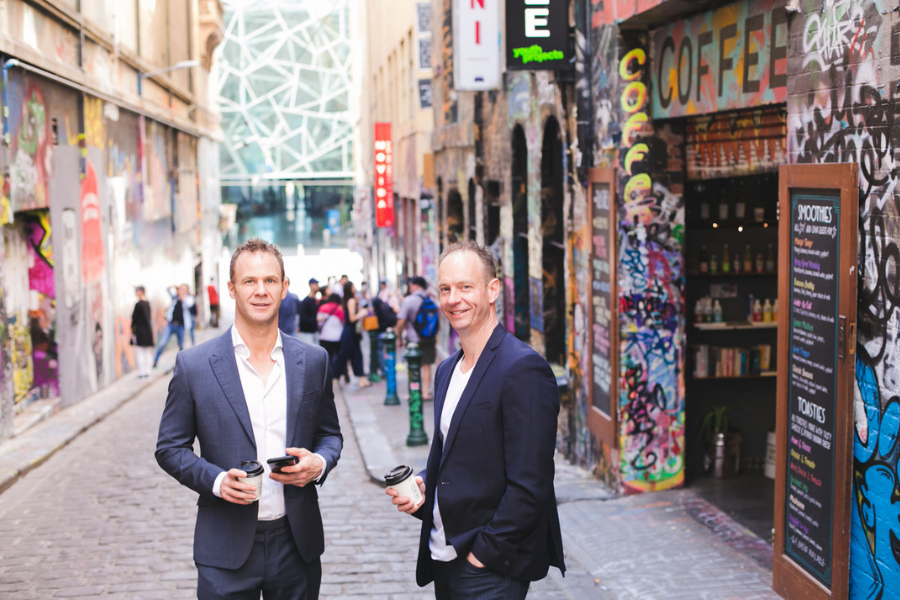 It’s no secret Australians love coffee, but it’s having a significant impact on the environment.

Despite the rise of the KeepCup and other reusable alternatives, Australians are still throwing out 1.2 billion disposable coffee cups a year, or 3.3 million cups a day.

Hoping to launch an alternative that will crack the mainstream are brothers Marty and Jeremy Rowell, who have launched a tech-enabled coffee cup subscription service called The Cup eXchange.

The idea came from watching the ABC series War On Waste, which last year opened the eyes of the brothers – and many other Australians – to the sheer size and impact of the problem.

“At the time of watching War on Waste, Jeremy and I were both owners of reusable cups but still found ourselves resorting to single-use paper cups from time to time,” Marty explained.

“While reusable cups work for some people, it is clear from single-use cup usage statistics that for most people they are inconvenient and often impractical. You only really want your cup for the short time that you are using it.”

The public’s response to the episode and the issue indicated to the brothers that Australians do care – but also love convenience.

“We really wanted to help decrease the use of disposable cups and the environmental impact, but in a way that’s both convenient and desirable for consumers and cafe operators,” Marty said.

With the brothers having talked for years about leaving the corporate world to start a business together, this idea was the one to finally get them to make the jump.

TCX is based on the idea of the circular economy. As Marty explained, “TCX takes responsibility for our cups. When they reach end-of-life, we remove them from circulation, crush them down, and use 100 percent of the material to make another TCX Cup. This ensures zero waste to landfill or pollution.”

Next, consumers will be able to subscribe to one of three tiers on TCX; each tier gives them unlimited exchanges of cups, with the base tier giving them access to one spare cup if they forget to bring one back to exchange, and the highest tier giving access to two spare cups.

Subscribers will receive a QR code, which they can then present for scanning at a cafe. They’ll then receive their first TCX cup, which will be linked to their account until they return it to a participating cafe or a precinct collection point.

The cafe or precinct collection point then washes the cups for re-use by the next TCX subscriber.

The process of developing this system, Marty said, was “like solving a simultaneous equation with five elements.”

“We had to come up with a solution that worked for all stakeholders: consumers, cafe operators, facility managers or councils, the environment, and TCX investors. And it had to be a full circular economic model,” he said.

For consumers, he explained, it had to be convenient and desirable enough to change behaviour, while for cafe operators it needed to be financially viable, while also avoiding process costs.

For facility managers, meanwhile, it needed to solve the waste management concerns and provide effective sustainability reporting, and for the environment it had to minimise production resources, maximise resource re-use, and ensure zero waste to landfill or pollution.

Lastly, for TCX, it had to be economically viable and rewarding enough to attract investors.

“Without investment, even the best ideas won’t get off the ground,” Marty said.

“We concentrated on each stakeholder, and really focused on what they need and what it would take for them to be part of the solution. We then iterated with materials, designs, technology, pricing models, and so on, until we found a solution that ticked all the boxes.”

The big breakthrough, Marty said, came when TCX struck up a deal with PwC to run a pilot program in Melbourne and Sydney.

“There’s nothing like real world conditions to further learn and refine the concept,” he said.

“We’ve learned about what consumers and cafe operators like, and changed areas where we saw an opportunity to further improve the customer experience.”

The cup itself is made of sustainable material, allowing for each cup to be repurposed into a new TCX cup at ‘end-of-life’.

Having raised a small seed round, TCX is now gearing up for an equity crowdfunding campaign via OnMarket.

“Inclusivity is a core belief at TCX and we know that making a significant difference requires the support of a crowd,” Marty said.

It will be interesting to see how TCX grows; the company hit its minimum target of $500,000 within the first week of launching the raise to the public. It is now targeting its maximum raise of $1.2 million.

Of course, crowdfunding is one thing, but mass-market adoption is another. After all, whether we bought one ourselves or got one (or a dozen) for free from one event or another, many of us have a reusable cup, know it’s much better for the environment, and still don’t use it.

With this in mind, part of the funds raised will go to spreading the word about TCX among consumers and, with scale and convenience everything, getting more cafes on board.

The service will officially launch at next year’s Melbourne International Coffee Expo, with TCX looking to bring on exhibitors to use the system at the event.