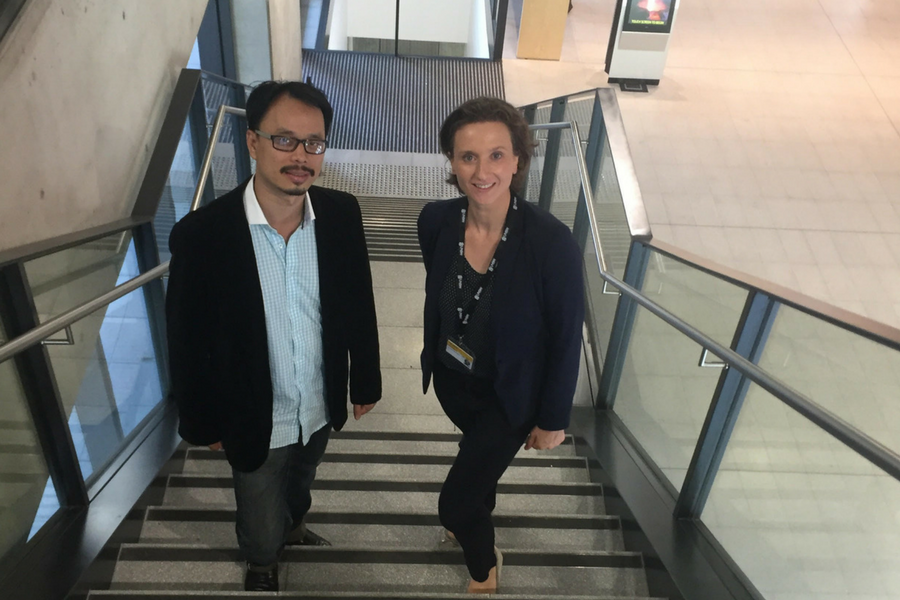 Just about anyone can relate to the deflated feeling of arriving on time for a doctor’s or clinician appointment, only to be met with the news that the service is running an infinite number of patients behind.

Rather than kicking their feet up and enjoying a snack, these doctors are more likely bogged down under the weight of both new and old patients, combined of course with analysing the daily influx of clinician reports and blood test results they receive.

To help simplify and speed up communication between clinicians and doctors, Sydney-based startup Clinivid has developed a cloud-based platform where medical professionals can privately share patient information and results through video and images.

Accessed through an app or web browser, Clinivid encrypts information and media sent from registered clinicians to the patient’s referring general practitioner (GP), notifying them based on the data’s level of importance.

The platform aims to replace the outdated and time-consuming process health professionals carry out when sending or receiving patient data, which typically involves a direct phone call or sifting through an external database in the midst of serving daily patients.

Clinivid’s founder, Katja Beitat, said the cloud-based solution was key to removing the interruptions health professionals face during their work when dealing with patient results, a factor that can impact the quality of their work.

“There are studies that have found that if a radiologist gets interrupted during their work, for example, their error rate increases, because they lose focus and time. A lot of radiologists, especially in private, have huge workloads,” Beitat explained.

“This app gets rid of disruptions on both ends, so the GP or radiologist can access the app and send or view content when they’re able to; it’s up to them.”

Imagining Clinivid came from Beitat noticing the communication issues doctors and clinicians were facing after working with the government on the Health Care Complaints Commission, a body that, as the name suggests, looks at issues within the healthcare sector.

“The way that the healthcare system works is very fragmented. A patient has to go through multiple clinicians sometimes, multiple nurses, doctors and often changing wards if they’re in hospital,” she said.

“There are a lot of people involved in one patient’s care. Very commonly what we saw is that when something went wrong somewhere, the communication broke down.”

Having previously worked in the telecommunications industry when living in Germany, Beitat said she understands that digital solutions are being implemented where possible, although there was nothing in the market that was tackling the communicative issue.

“Nearly every single doctor out there, in reality, uses their mobile to text and communicate because there’s no other way to really get this done, since the hospital tech doesn’t really support a mobile system. So we begun piloting with radiologists in Southern Sydney to provide imaging to surgeons and GPs,” said Beitat.

Moving to Sydney’s Fishburners, Beitat met her cofounder, Minh Lee, and the two began trialing the platform with radiologists in Southern Sydney to allow them to supply patient images to surgeons and GPs.

Launching into market last October, the startup moved into The University of New South Wales’ (UNSW) Michael Crouch Innovation Centre as a Catalyst in Residence, a space which Beitat said provides Clinivid access to a rich supply of resources.

“We’re surrounded by medical schools and a lot of resources, to it’s a really great place to be. I was very surprised by how open they are and willing to work beside you. It’s absolutely amazing,” she said.

Currently, Clinivid offers paid registration for clinicians and doctors which allows them access to send and receive content, plus a free version that can be used by GPs to receive and view content only.

The app is open to registered clinicians and GPs only, with the startup filtering through sign-ups to ensure credibility. To then access the platform, Beitat said there are protective login features, including a fingerprint scan and pin code, to ensure patient data isn’t physically compromised on a device.

Once on the platform, clinicians are able to connect with GPs and open patient “cases”, where they can communicate and send images, videos, and text. Clinicians are able to record videos of, for example a patient’s wounds, X-rays, movements or any information that’s relevant to the referring GP.

Videos and other content can be sent privately through the cloud to up to five other users, using quality optimised for mobile connections, a factor which Beitat said enables the platform to be accessible to regional practices.

“A doctor or GP is also able to switch their account ‘off’ if it’s they’re off work for the day or if they’re taking leave, so they sender can’t forward them information when they’re not around. This reduces the chance information gets lost, which is another big problem that occurs in the healthcare system,” Beitat said.

To ensure urgent results are received, Beitat said the sender is able to toggle the “importance” of a video or image. Content tagged ‘urgent’ will send push notifications to the recipient, and if a certain period of time passes without being viewed, the sender is notified that they should contact the recipient by other methods.

Currently, Clinivid has clients within dermatology, radiology, and physical rehab amongst others, with Beitat adding that the business is looking to implement the platform in hospitals next.

Having nearly completed a seed funding round following the receiving of private investment and a government grant last year, Beitat said the startup will look to use the funds to gain broader traction across Australia and pilot Clinivid in hospitals.