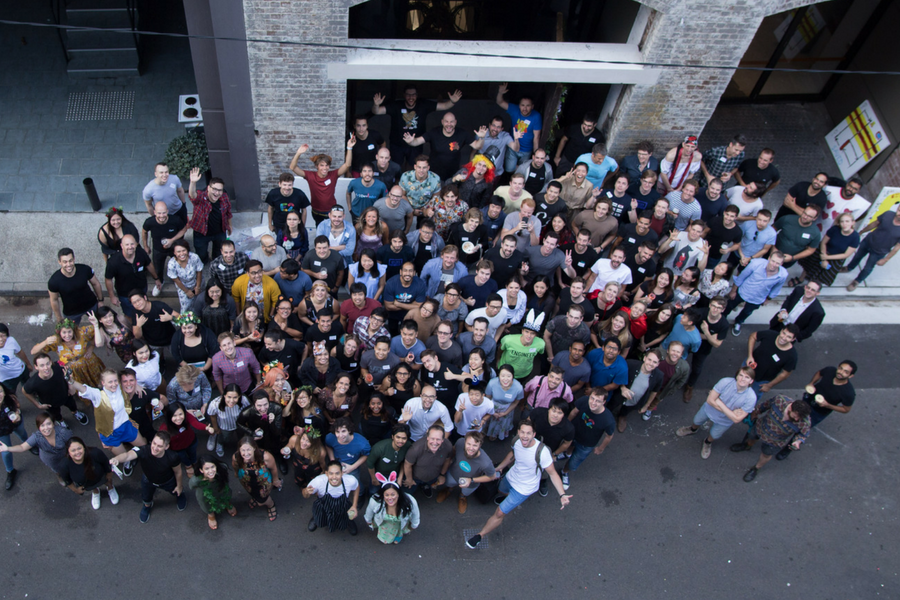 Canva is growing incredibly quickly and we’ve been roughly doubling the number of people who work here every year since we’ve started.

I still remember the day that we opened the second floor in the Sydney office—it was both exciting and scary. Exciting, because it was a very tangible way of seeing the success of the company; scary, because it was the first time that the people we worked with every day weren’t there for us to wave at.

With teams spread across different floors—and different countries—it challenges the way that we communicate with one another, how we include people in decision making, and feel unified as a company. Our ‘Season Openers’ and ‘Sunday Musings’ are just a couple of the ways that we tackle those challenges.

Since the start of this year I’ve noticed a particular challenge that a lot of us have been grappling with now that we’re at this particular stage of growth: staying focused and keeping control of our precious time. As a noted proponent of Kanyean philosophy recently said “I place a high value on time. Everything means nothing until you make it something.”

This season our cultural goal is to “set crazy big goals and make them happen”. The “making them happen” bit is the tricky part, and requires a lot of time and a lot of focus to pull off.

Early in 2018, I could feel both my time and my focus slipping out of my grasp. Slack,1-on-1s, emails, group meetings—both regular and ad hoc—requests for advice…my days and weeks were getting whittled away by the demands of others and there was no room left for the work—the stuff that actually moves us towards our goals.

At the end of January I decided to actively try and solve this problem for myself. And since I started to think about it and talk to lots of other people, I’ve discovered that they’re suffering from the same problem. Some people even resign themselves to doing their “real” work after hours because their daytime gets eaten up by everything else. That’s not how you should be living.

I wouldn’t say that I have the silver bullet for how to manage your time effectively. Lots of people do different types of work at Canva, and everyone has different approaches that motivate them. But I’ve been pleasantly surprised at the results I’ve gotten with my new regime, so I thought I would share them and help to place a focus on using time effectively at Canva.

First off, I identified a few key areas that seemed to be causing me the most problems:

One of the things I really wanted to work on was to have more uninterrupted stretches of focused work. There have been scientific studies showing the impact of interruptions to focused work—it can set you back up to 20 minutes each time you get interrupted.

Have you ever gone into Slack to ask someone something, been distracted by 53 red bubbles —forgot what the original question was—and then wondered where your afternoon went? That was happening to me multiple times a day. Some people have a superhuman ability to ignore unread notifications. I am extremely jealous of those people.

What’s even worse is that you get a real neurological reward for answering all those questions on Slack. Being immediately responsive becomes addictive and it feels like replying to Slack messages is the most productive thing in the world. While it is part of my job, it’s not the only part of my job, so it can’t override everything else I want to do.

There are a number of ways that Slack gets at you: there’s the notifications that pop up in the top right of your screen; there’s that red dot in your dock; and there’s the red numbers next to people’s names. Don’t talk to me about mobile notifications, I turned those off ages ago.

I tried a bunch of ways to configure Slack so that only the most important messages got through to me while I was using other programs, but I couldn’t find a way that really helped. In the end, I decided to turn off new message notifications and the red dot in the dock telling me I had unread messages. When I choose to be in Slack I get a nice list of red bubbles that I can respond to, but if I’m writing in a Google Doc, coding in my editor, or designing in Canva then I won’t get interrupted.

This works for email too. I’m an ‘Inbox Zero’ kind of guy, so I like to keep my emails well ordered. Doing that 47 times a day is unproductive. So off went the notifications and now I can deal with email in batches just a few times a day.

Now that I’d erased 9 hours of Slack from my day, what was I going to do with all that time? Well, I’d noticed that there had been a few things on my to-do list for a while and they tended to be longer-term, strategic things. The reason that they had been on my list for so long was that they are easily bumped by things that are ‘higher priority’. Those high priority things tend to be more day-to-day, tactical things: discussing someone’s work, tweaking a design, jumping on a bug, passing information around…those types of things. They’re important, but they also have the ability to consume your days and weeks.

I realised that if I didn’t carve out time for some of the future things, then they would never happen. While explaining this conundrum to Adam Jacobs from The Iconic, he suggested that I give his time planning technique a try. I did, and it’s worked.

On Sunday night or Monday morning, I write up everything that I want to achieve that week, big and small. I used to do this anyway, so no big change. BUT! Once I’ve done that, I take the important next step of actually entering each of those tasks into my calendar. It’s a big game of time tetris—estimating how long something will take and explicitly finding the time to do it.

This has lots of advantages:

You are realistic with your time: If all those tasks are going to take 12 hours of your day, then you can’t possibly do them. So, which tasks are most important? Use the 4 Ds to triage them.

You have a schedule for when you are going to do everything: You don’t have to worry about when you’re going to do that small, niggly task, because you’ve booked it in, so it’s pretty much done already.

It is an outward signal to your teammates when you’re available: If you don’t already, you should check everyone’s calendars when you book a meeting. If you start doing that, then you’ll understand that filling out your calendar helps other people find the appropriate moment to get a bit of you time.

You are aware of tradeoffs: Important stuff always comes up during the week and to fit it in you’ll have to re-organize your whole calendar. This makes you aware of the tradeoffs that you are making by choosing that thing over any other stuff that you had planned.

You can then quickly repeat the process each morning to make sure that you are working on the most important stuff right now and your day is planned out smoothly.

In practice, I don’t fill up the entirety of my calendar because change is a constant at Canva and you need some gaps to slot in chats with other people, meet about new ideas, do urgent work that you didn’t predict, and munch on an emergency tim tam.

But being able to see the big picture and what the rest of my day and week looks like has been incredibly valuable and de-stressing.

For me, collaborating with other people is one of the greatest things to do at Canva. We have so many smart, passionate people here at Canva, and sitting down in front of a notepad with each of them always produces a better solution than what we started with. It’s important that you know when to have a meeting or not, and know how to make every meeting a productive use of your time.

There’s plenty of good articles on meeting hygiene, but if you’d like a five second summary, here’s a good checklist of things you can think about when someone asks you to have a meeting:

– Should we not have this meeting?

– What are we actually going to talk about in the meeting? Have an agenda.

– What actions should we take now that the meeting is finished?

If you’re starting to reassess how your calendar works—from Part 1 above—then bunching meetings together is a great idea, because that gives you empty blocks where you can schedule in some focused time. The tendency when someone asks “hey, can we have a meeting?” is to say “yes”. But if you’re in the middle of a great stretch of productive work, it’s better to take a quick look at your calendar and schedule the meeting into one of your gaps, or group it with another set of meetings. Then you’ll be in meeting mode and won’t disrupt some of that great flow you get in a productive work session.

You should also think about whether a meeting is the best format for what you want to communicate. There are some things that require deeper thought, some things that are not urgent, and some things just can’t be explained by typing. Knowing which is which is an important skill.

Writing something up in a document and sharing it can be a better first step than getting a bunch of busy people in a room, and will also allow them to think more deeply about the problem and give their own considered feedback. Conversely: sometimes docs, emails and Slack can devolve into a confusing mass of tangled discussions and a meeting can help get everyone aligned and heading in the same direction.

So, give it a try

You’ve probably read dozens of articles on time management and the “top ten tips of productive performers”. I’m not a productivity guru, and I think these things are highly subjective depending on who you are. But hopefully one of these techniques will help you with one of your own problems.

More importantly, I want to stress the importance of your awareness of time and your ability to structure and control it. I’ve found that it is one of the most important factors in my happiness and my productivity.

Cameron Adams is cofounder and CPO at Canva.

Cameron Adams is co-founder and Chief Product Officer at Canva