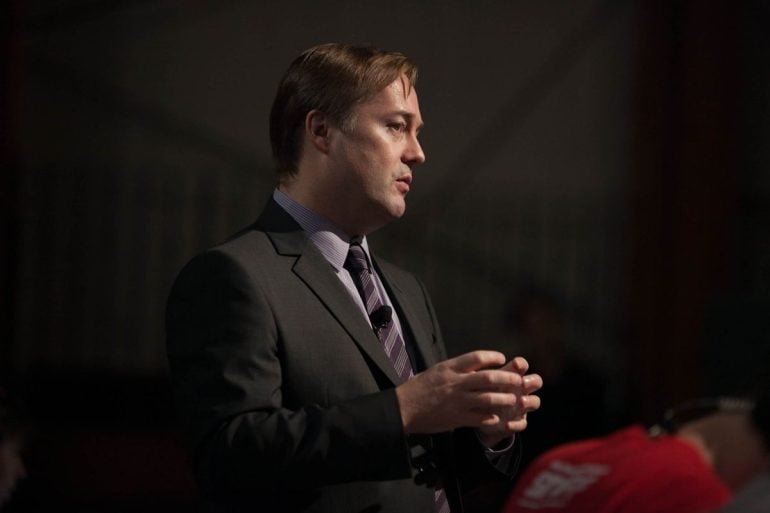 Investor and Musk grenade shield Jason Calacanis.
Welcome to Ignition Lane’s Tech Wrap, where they cut through the noise to bring you their favourite insights from the technology and startup world.

Cash to splash & other VC news

The amount of capital flowing to Australian startups is down about 50% compared to the same time last year. However we have noticed an increase in raise announcements in recent weeks.

So decent money is still out there. Over in the U.S., VCs have record levels of dry powder – at least US$290bn, including $162bn reserved for new investments. The last two months has seen a flurry of Aussie-related VC fund announcements, too:

Funds 3 & 4: Telstra Ventures closed $500m and OIF raised $140m for their third funds. Interesting read on Telstra Venture’s use of data science in investment decision making. EVP, which says it hasn’t needed to write down investments this year because its average investing valuation is 8.4x ARR, closed the first $60m of a new $100m fourth fund. Main Sequence Ventures confirmed it aims to raise $300m for its third fund.

No longer media darlings. Journalists took aim at VCs, with The AFR criticising them for their role in inflating valuations and fuelling hiring and spending frenzies last year… only to then “lectur[e] founders on the details of unit economics and the importance of cash flow.” Not wrong. The Sydney Morning Herald even took a dig at Blackbird’s “self-mythologising” mission and new bird vision inspired website.

Investor finding out that the entrepreneur's forecast was, in fact, not conservative pic.twitter.com/xfhNppY8PT

Hunting for capital? Keep your pitch deck concise. TechCrunch reports that investors are spending 24% less time looking at pitch decks in 2022, compared to 2021. On average, you have just 2 mins 42 secs to convince them to take a meeting with you.

Our friends at Cut Through Venture are hosting Demo Day FLIPPED on 7 Oct, where pre-seed and seed investors will pitch their funds to founders.

Canva’s new world domination strategy. A 44% valuation cut isn’t slowing Canva’s pursuit for growth. In September the company ranked #3 in the Forbes Cloud 100 and unveiled a host of new products and features, including an end-to-end visual communication platform. Complete with docs, whiteboards, a website builder and data visualisation, Canva’s Visual Worksuite will give Google Workspace and Microsoft Office a run for their money.

Seer’s green light. Seer will launch its home-based epilepsy monitoring technology in the US after receiving FDA approval.

Money or the bag? New employee share scheme regulations have come into effect in Australia, allowing companies to offer up to $30k/year in equity to employees. Related: Shopify is now letting employees decide how much of their compensation they receive in cash and equity.

Heating up. Climate Salad released its report into the climate tech industry in ANZ.

All that glitters. Martech Metigy has been placed into liquidation after failing to raise further capital. It last raised $20m in November 2020, when the company claimed to have $5m FY20 revenue, $20m forecast FY21 revenue and a customer base of more than 26,000. Regal contributed a sizeable chunk to that $20m round, at the time commenting to AdNews:

Regal Funds Management says it doesn’t take an in-person meeting to look at the numbers… “The biggest thing in early stage investing is the person, the guy or girl, that you are backing. David has had previous success in his other businesses, but he’s also just very passionate and clearly driven… We knew that he would be a good custodian of new invested money.”

Did ya just?? Administrators have since uncovered that sales totalled just $61k in FY22 and allege that Metigy became insolvent in late 2021 after providing a $7.7m loan to Director & CEO, David Faithfull, who then went on a property buying spree.

In the bin: Optus’ reputation. ICYMI Optus was hit with a gigantic data breach. We’re not sure what’s worse – the fact that the breach itself occurred or Optus’s response to customers.

In other hacking news, police in London arrested a 17 year old suspected of hacking Uber and Rockstar Games (maker of Grand Theft Auto).

Consider this a good reminder to 1. Map (and secure) your data assets, 2. Prepare/review your incident response plan, and 3. Continually educate your team to help recognise potential sources of danger. Not if, but when.

ASX says farewell to three tech cos. iSelect’s board agreed to a takeover offer from rival Innovation Holdings Australia (owns Compare the Market), valuing the business at $72 million – just 15% of its IPO market cap in 2013. Shareholders and ACCC are yet to approve the deal. ResApp agreed to a $179m takeover offer by Pfizer and delisted this week. ResApp claims to diagnose a range of respiratory conditions such as asthma and Covid-19 by recording of a cough on a smartphone. MyDeal’s acquisition by Woolies also completed, taking the marketplace off the ASX.

MYOB acquired Flare, an HR platform that provides onboarding, benefits and superannuation services to SMEs. To differentiate, MYOB wants to move beyond accounting.

French unicorn Algolia acquired Search.io, a Sydney search and discovery tech startup. Algolia is one of the largest search providers in the world.

Ento was acquired by Humanforce, an Accel-KKR backed workforce management rival. Humanforce indicated it is on the hunt for other acquisitions down under.

Figma will sell to Adobe for US$20bn – its largest deal to date. With the tech and economic downturn, Adobe found an opportune time to pounce on Figma, which has won over much of the design community with its collaborative tool. Related: great essay on Figma’s brilliance (2020).

What investors first paid for @Figma, which @adobe buying for ~$40.20 per share:

Speed is one advantage of crypto payouts. Reach is another. Millions of talented freelancers live in countries where it’s hard, if not impossible, to open a local bank account.

Keep up with the kids. TikTok launched a new feature called TikTok Now – a copy cat of BeReal, which prompts users to capture what they’re doing with their phone’s front and back cameras at a random time of day. Over the last few months French-based BeReal has become popular with the youth, who want a more authentic experience online. It now has more than 10 million users and was last valued at US$600m in May. Here’s some BeReal social media strategy inspo.

Eating out of the palm of Elon’s hand. The Elon Musk v. Twitter trial has surfaced a trove of messages between Elon and his closest confidants, revealing how he raised billions to fund his Twitter acquisition in a matter of hours:

This text exchange showing how Elon Musk got Larry Ellison to commit $1 billion for the Twitter deal is all time pic.twitter.com/e3TTUgHRb5

Perhaps best of all are these a$$ kissing messages (all to Elon):