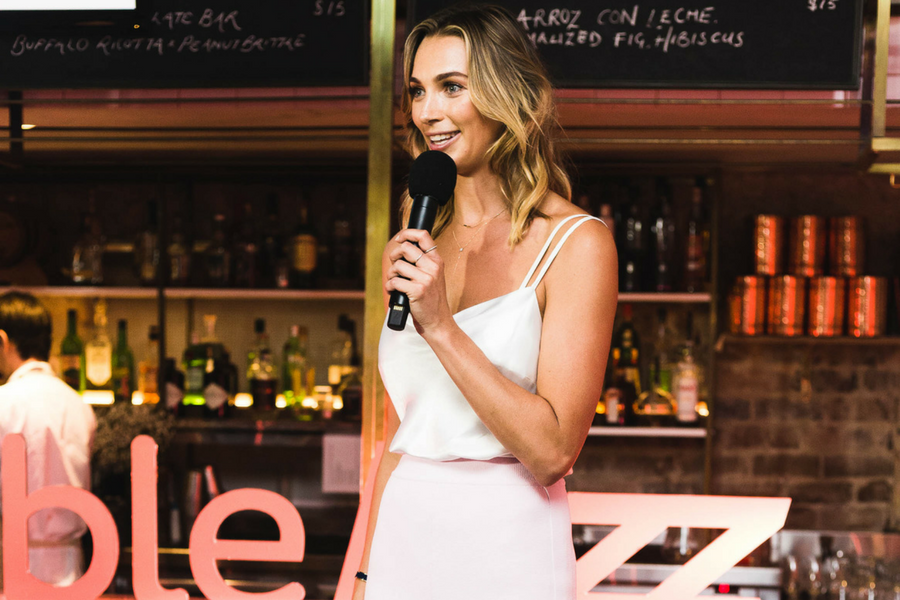 Battersby first started with the business as a marketing consultant in late 2016 after a call with Bumble founder and CEO Whitney Wolfe Herd.

“I don’t really like that word, ‘luck’, but I was in the right place at the right time. I had told the right person that I wasn’t really sure that what I was doing was the right thing for me; I found myself sitting at my desk thinking, surely I’m capable of more than this? I was fortunate that this friend of mine then introduced me to Whitney,” Battersby said.

Though she hadn’t had a need to use the Bumble app herself, Battersby had heard of the app and, most importantly, the way it focused on empowering women, from pushing them to make the first move and send the first message, to its advertising.

Talking to Herd, Battersby realised the business wasn’t just paying lip service to the idea; after all, it goes back to the founding of Bumble, with Herd launching the business after leaving Tinder and suing the company for sexual harassment.

As Herd told Forbes, she experienced a torrent of online abuse after filing her lawsuit, and in turn began looking at building a women-only social network focused on positivity. Linking up with Andrey Andreev, founder of the world’s largest online dating network Badoo, Herd created Bumble.

“I honestly just had a gut feeling from the moment I spoke to [Whitney]; my intuition is usually pretty right, and I just had this feeling like, this is going to be big, and I felt really strongly about it. I really believed in the values and everything it stood for, and I felt like it was a brand I could be passionate about,” Battersby said.

“For me, I saw it was all about women supporting other women.”

This notion hit hard for Battersby, who was working in the male-dominated banking industry; though she was working in a HR role, a space dominated by women, she wasn’t often feeling supported by the women around her.

Given the proliferation of dating apps in the market and the fact Tinder is still perhaps the best-known name in the space, this is no mean feat.

Battersby believes the app’s local growth has been pushed by the team’s focus on experiential marketing, kicking off with a party in Bondi that Battersby said was all about bringing together people from different backgrounds and places across Sydney.

The company in February rolled out a range of events across Australia for Valentine’s Day in partnership with a variety of brands – it partnered with the Sydney Dogs and Cats Home to host an activation in Martin Place that invited people to take a picture with a pooch for their Bumble profile in exchange for a donation, and is now giving users the chance to win spots at small dinner parties it is hosting. As well as pure marketing, the events also serve to give users who meet through Bumble a place to have a casual meet up in an easy, social setting.

“Our downloads doubled on the day that we did that [first] party, and from that moment on it was all about word of mouth and keeping this ball rolling, and showing people in Australia that we were more than just dating app,” Battersby said.

“The biggest challenge for us at the start was the stigma around dating apps; we knew it was there, so we knew we had to do something to try and right that.”

Beyond its events, the team has been helped along by Bumble rolling out Bumble BFF and Bumble Bizz, where a user can swipe to find new friends, or network for business respectively.

It’s an interesting business move – while moving beyond the dating focus, the extension of course also means opening the app up to new users, and keeping others on – after all, if the app is achieving its goal, users looking to find love through Bumble and actually finding it have no more reason to use the app.

The focus on women in business again went back to the idea of empowering women to go after what they want, this time in their careers, and again giving them a safe space to do so – kind of like LinkedIn, but without the creeps.

Having only marketed towards women in Australia since its launch as it built its brand, Battersby said the company is now gearing up to bring men into the equation over the coming months as it pushes for further growth across its three verticals.

Bumble’s gender split is 50/50, and with a 2016 report finding almost 68 percent of Tinder’s users are male, it’s a split that the company has guarded closely.

“We’ve never done anything yet that is targeted towards men and there’s a simple answer to that, which is, when Bumble is just a dating app, where women go men will follow. It was pretty easy to get men on there if we were attracting great women,” Battersby explained.

With its Instagram profile full of posts pushing women to be the CEO as it explores life beyond dating, Battersby feels the stigma associated with dating apps is starting to fade from Bumble.

“I had all these Bumble t-shirts when I started, so I gave them to all of my friends and asked them, would you feel comfortable walking down the street wearing this t-shirt? A few of them said yes, probably because I’d spent time rabbiting on to them about Bumble, but a few of them didn’t and I always thought, okay, if that’s your answer to that question then you don’t understand Bumble,” she said.

“Now if you’re not comfortable walking down the street as a woman wearing a Bumble shirt then, to me, I haven’t done my job and you might not know as much as you need to know…by creating a platform which is encouraging women to just go after what they want from the get go, I’m hoping that that will actually transpire into more areas of their life.”