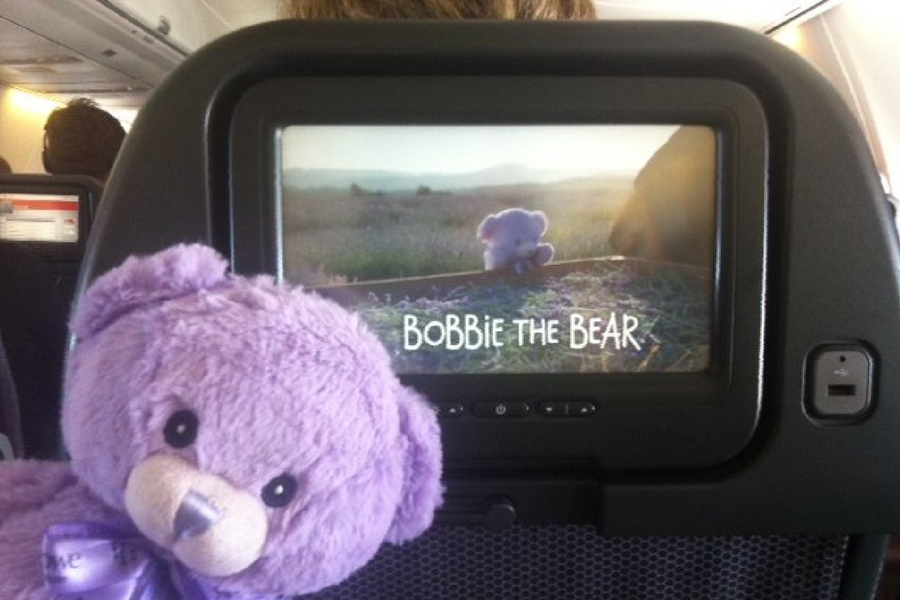 Down in Tasmania is where you will find one of the most successful case studies of a foreign brand succeeding in China: a hundred year old Tasmanian lavender farm, whose innovation team is now based at Haymarket HQ. Bridestowe (pronounced brid-ess-tow) Lavender Estate is owned by the Ravens family, who are behind the brand that’s won the hearts of Chinese consumers and travellers alike.

From London to Tasmania to China

97 years ago a London perfumier set out for an unknown land with nothing but a packet of lavender seeds and a dream of creating a reliable source of fine french lavender oil.

Though the estate has gone through a number of distinct evolutions throughout the last century, its success had waned over the years until James Ravens and his family purchased it roughly a decade ago.

“Just dig a hole, bury your life savings and walk away because it’s easier and the outcome is about the same.”

The transformation of a struggling farm into a flourishing retail and tourist business is now a family passion project. Bridestowe has caught global attention, particularly in China.

Born as a solution to make something of an excess of dried lavender, Bobbie the Bear took China by storm a few years ago, transforming the scented teddy bear into an overnight celebrity — now a common name in every Chinese household and recognised by every Chinese delegation, Bobbie was presented as a representative gift to Chinese president Xi Jinping on his first visit to Tasmania in 2014.

The success came at a price, however; Bobbie was a phenomenon that almost crippled the business.

Capturing China’s imagination through the power of KOLs

The age of digital communication and social media brings a new form of marketing in the form of Key Opinion Leaders (KOLs). Also known as Influencer Marketing, many businesses are enlisting help from celebrities, socialites, and internet personalities to help boost brand awareness amongst their existing follower bases. In many cases, this process is meticulously planned, but in other cases a product will reach viral status on its own.

This is exactly what Bridestowe experienced when Chinese model Zhang Xinyu posed with Bobbie the Bear on social media, triggering a national craze and mass hysteria. Other celebrities such as Sun Li and Fan Bingbing followed suit, expanding Bobbie’s daily reach by the millions.

Demand jumped exorbitantly from tens to hundreds of thousands of orders almost overnight, and a one bear per person rationing system was implemented in order to keep as many customers satisfied as possible.

“It was literal insanity…that’s the sort of thing that can kill businesses.”

The incredible success of Bobbie the Bear meant that every part of Bridestowe’s supply chain had to be reevaluated in order to stave away the literal meltdowns and tearful emails that ensued from eager customers.

Much like the unexpected nature of the success itself, counterfeit operations arose to fulfil a growing demand that far outweighed supply, and the mass production of bootleg Bobbies eventually led to a ban from Chinese customs due to contamination risks of low quality lavender.

“The reason why I believe Bobbie was so successful,” Ravens explained, “is not just because it was cute. It was a very cute form factor of something that worked. If you feel bad, or sad, put him in the microwave and he’ll make you feel better. He’s not a passive thing but an active thing.”

With proven benefits in areas such as memory, relaxation, and focus, and no shortage of literature about its epigenetic effects, marketing lavender – an item that no one would notice if it were to disappear from the planet the next day, Ravens admitted – still remains a challenge.

“Lavender is one of the true luxury items in the world. With your Louis Vuitton or Hermes bag, you’re just picking a position on a spectrum but in the end you’ll still need something to carry your things. With lavender it comes down to value addition and product innovation.”

When every family dinner is an informal business meeting, Ravens and his family are constantly looking for opportunities to push the creative bounds of combining lavender and retail.

“When you’re creating 300 or so products, it’s probably not unrealistic that one might do okay. The bear was insane, but that success was really more of the notion of ‘the harder I work the luckier I get’,” he said.

“A critical lesson in entrepreneurship is that if you try something and it doesn’t work, you move on. Understand the risk, research the hell out of it, and don’t just go all out and pray. Grab opportunities when they arise. For example, the milk tea place across Haymarket HQ was closing down and on a whim I bought all their machines, so come next season, guess who’s doing bubble tea!”

China is by far Bridestowe’s largest market in not only in product sales but also in visitors.

“It’s funny, we’ve never actually exported to China or targeted them,” Ravens said. “The quickest road to poverty is to target someone. The moment someone feels like they’re being targeted they’re instantly disinterested. All we’ve ever tried to be is a lavender farm.”

The past few years have seen redesigns of all onsite and online communications in order to cater to the Mandarin-speaking audience that makes up the majority of their business: factoring cultural sensibilities into marketing strategies is all part of being an amiable host.

“China is coming up the sophistication curve and their demand is going up at a ferocious rate. We’ve noticed the difference between the type of visitor four years ago and today. But there’s a difference between making something accessible and targeting them,” Ravens explained.

“For instance, we understood that gifting is extremely important in Asian cultures, so we made sure we had a range of products that could satisfy that. In absolute dollar terms Bobbie Bear is our number one product, but in terms of units it’s our little gift bags of soap. With these little bags, Asian customers are able to take it back home and present them to friends and family, allowing them to show their respects and to uphold their gifting values.”

Ravens believes there is a very fine line between creating a product for someone and making it accessible to their needs.

“What we’ve been doing in our small way is helping capture their imagination. For us, someone who takes a bear home with them is worth absolutely more than us shipping off a pallet. Our conversation with China is about engaging with their people.”

Focusing on relaxation, cleanliness, and purity, Bridestowe is very much the antidote to the modern conundrum of a stress filled and time-poor lifestyle — a perfect pitch to Chinese consumers who desire a safe adventure in a clean and natural environment.

“To crack into a ritual is really hard. People’s lives are already full. For something to go in, something has to come out. But not everything that happens in life is positive. When people come to the farm, or when I create a product like a hand cream, it’s not just about looking or feeling good,” Ravens said.

“The important thing is that when you step off the bus, or when you rub the cream between your palms, you take that moment, create that little space, create a new positive ritual. That very moment is costless, it’s about you, and nothing else. It’s not just about telling people to come here, it’s about making people want to come.”

Understanding the reality of value addition

“We’re a 97 year old startup,” Ravens jokes – it’s one he tells everyone when they ask why he’s at a startup hub.

“This farm has stood through 97 years of the changing nature of demands and expectations of people. To think differently about what we can do is the hardest thing.”

Inheriting the farm from a large industrial company, years of struggling to keep the business afloat had seen it being passed from company to company since its original founder had put it up for sale.

“The farm was literally dying.” James recalls that the 200km stretch of lavender had to be individually replanted when it was first acquired. “When you put your assets and investments into something, you expect a return. Lavender farms do not do that. Not unless you have a collective vision about what it can be. When my family stepped in, we understood what it was.”

On a daily basis, customers often remark about the apparent ease of running a lavender business after witnessing the transparent nature of their operations.

“The reality is that we understood very early on is that value addition is critical to the survival of what we do. This is not your grandmother’s lavender farm. This is not what you should perceive as being as cutesy little enterprise. We had to think differently about everything.

“My ambition is pulling back until we ultimately stop unbranded bulk lavender sales completely. When you’re dealing with a product with a limited volume, selling in smaller increments will bring a higher return per litre than selling in wholesale. This is the value addition of taking something that’s a finite supply.

“Sometimes it’s my fear that entrepreneur reality is viewed as this idea of having to start a big booming company, but really to me entrepreneurship is just the nature of a lot of small things. It’s about looking at a product and thinking how we can make it better, cheaper, more appealing, more unique, more us.”

With a background in corporate finance, Ravens’ original job was almost the complete opposite to entrepreneurship. For many years, he admits he had the luxury of sitting in meetings and judging other people’s work.

“The nature of corporate training is very much glass half empty. You think about risks, protection of the brand, justifying why not to do something, about failure. But being an entrepreneur is being like a dreamer. You can’t say no to everything because otherwise you have no business. But how do you do that? How do you get comfortable with risk?

“A friend of mine in a similar corporate role said something that resonated with me a lot: ‘I could never be general manager of a company because I can always think of a thousand reasons not to do something.’ The greatest transformation I’ve had as an entrepreneur is having those restrictions and shackles thrown off and being able to think more freely. But I’ve learnt so much by still imposing those corporate disciplines on myself,” Ravens said.

“Take a critical mindset but don’t let the spreadsheets rule.”

To prevent indecision from kicking in, Ravens explained that building a set of principles to base decisions off is key when it comes to balancing risk and innovation.

Being an entrepreneur is a tough journey, but it’s the nature of the job and if it was easy, Ravens said, then everybody would be doing it.

In the end, it’s passion that glues everything together and is what will no doubt continue Bridestowe’s legacy.