How bikeshare startup Mobike approached its expansion into Australia 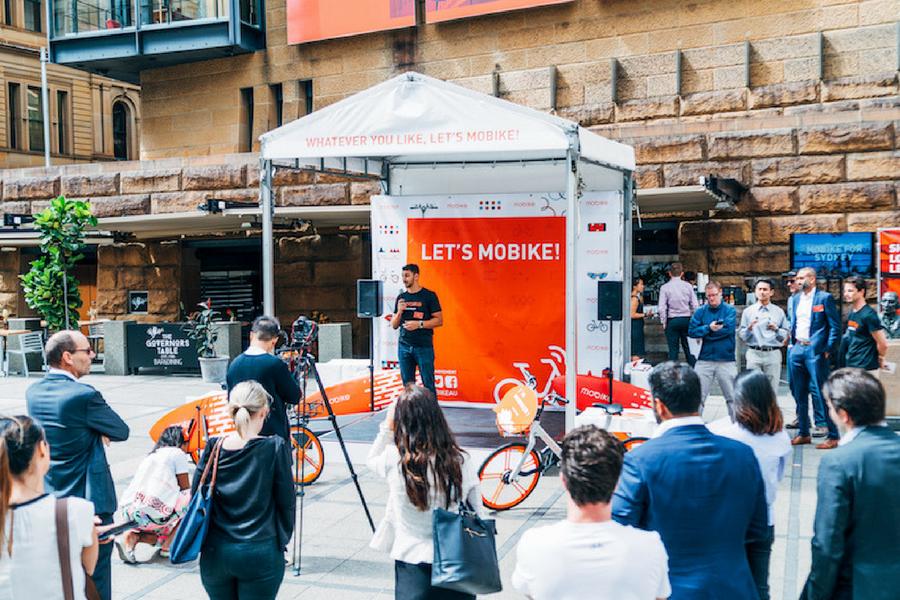 As a Sydneysider living in the suburbs, the idea of cycling to work or even my local train station is an entirely foreign concept. Not only is my local area full of inclines I wouldn’t want to tackle at 7am – or probably any other time of day, for that matter – there are also no bike lanes and, true to the stereotype of Sydney drivers, those in cars don’t exactly look upon those on bikes fondly.

Before moving to Singapore as part of his role with food delivery company Deliveroo, Mina Nada felt the same.

“When I moved there I was a pretty typical Sydneysider in having a healthy skepticism towards cycling; I was brought up with a car and would drive around to most places…I probably wasn’t a big believer in [Lord Mayor] Clover Moore’s bike lanes, and saw them as making my life a bit more difficult as a driver who lives in the suburbs,” Nada admitted.

Seeing the launch and growth of bike sharing in Singapore, however, changed Nada’s view.

Living in an area close to the central business district, Nada began biking to work, eventually knowing he could come to rely on finding one a few minutes from his apartment as the number of bikes on the streets grew.

At the start, he found the various bikes from different operators were mostly the same, but as their use increased, he said he began to see the differences in the quality of the bikes and grew fond of Mobikes in particular.

“I started to look out for the Mobike, and at that point I saw that the company had raised a lot of funding and was looking to expand internationally, so I reached out to them and said I loved the product and thought Australia needed it,” he said.

From there, he joined the China-founded company, now heading up its operations in Southeast Asia and Australia from his base in Singapore.

Despite the skepticism before being converted to the wonders of cycling in Singapore, Nada firmly believes bike sharing can come to make up a key piece of Sydney’s transport infrastructure.

“Sydney is hyper-congested and cars are just no longer a good way to get around. Public transport is okay, but it’s often hard to reach, so there were a couple of use cases which sprung to mind for Mobike in Sydney,” he explained.

“Firstly, I think for a lot of people in the inner city, whether they’re in Kings Cross, Pyrmont or Surry Hills, it’s probably easier and quicker for them to cycle in to work than to catch public transport…then I think we have an opportunity to make our public transportation system more effective as well [by having people cycle to a station].

“We can’t build up parking lots that are large enough to handle all the people driving to the station in the morning, so I think this is another area where we can contribute.”

As such, Mobike has been relatively slow in its Australian rollout compared to its counterparts, taking a considered approach; rather than placing bikes on the streets, the startup has been working with councils to look at where they can be best placed to integrate with an area’s public transportation system.

The startup had in November announced its intent to launch down under, winning a tender from the City of Gold Coast to strategically roll out 2,000 bikes around the suburbs of Southport, Surfers Paradise, Broadbeach, and Varsity Lakes in time for the Commonwealth Games in April.

As part of its deal with City of Gold Coast, Mobike will be working with transit company TAG Group to roll out the scheme, with the bikes also customised for the area: the bikes launched on the Gold Coast will have three-speed gears, a larger frame, and 26-inch wheels, with a number to also be equipped with surfboard racks.

”I think every council we talk to knows that bike share is good for them…and doesn’t cost them anything because it’s private enterprise, is generating its own profits, and it helps them achieve all their public policy objectives,” Nada explained.

“Unfortunately [other cities] haven’t been as forward thinking as the Gold Coast; they haven’t developed policies and they don’t know necessarily how to approach it, so they’ve been faced with a situation where companies that aren’t as responsible or aren’t looking to build a long term, sustainable business models are just launching without consultation and without being welcomed through the door, which has been really sad for the industry.”

Despite the proliferation of other bikes in Sydney, Nada said Mobike saw an opportunity to work with the City of Sydney to identify key hotspots suitable for its bikes, eventually putting down 500 in the Green Square district in November.

“We look at population density, car congestion, public transportation utilisation rates, the number of people who work in that particular area, and data that already exists around the propensity of people to cycle, which is linked with existing cycling infrastructure. Not every single area we roll out is going to be ideal in terms of every single one of those factors, but that’s at least how we prioritise on that front,” Nada said.

Sitting around four kilometres away from the Sydney CBD, Green Square was seen as an ideal testing ground given it has a high population density, cycling infrastructure, and plays host to both residents commuting to the city and commuters shuttling in each day to offices in the area. As such, the startup has seen customers bike to the city for work and back again, and others picking up bikes from the station to cycle to their office.

Despite the news stories around bike share bikes “polluting” the streets, Nada is confident the bike share concept will grow out of its “awkward teenage years” and come to be seen as a legitimate part of the local transport infrastructure as the players without a sustainable plan are weeded out.

“Fundamentally, if you look at Australia as a market, we respect the rule of law and crime rates are low, so in the longer term or in the grand scheme of things we don’t expect that vandalism or these kinds of things will be any more problematic than say, a bank having a few bad loans where people won’t pay up; similarly we’ll have a few bikes which might get stolen or vandalised, but I think once this is a fully operating scheme, it’s not going to be debilitating,” he said.

“It’s been blown up in the media because it’s a pretty unique situation, but in the same way that you don’t really like people vandalising the trains or buses you’re on, people are eventually going to feel the same way about the bikes.”

To further ensure bikes are left where they’re actually needed, Mobike also utilises ‘Magic Cube’, an AI platform it unveiled last year to help it forecast supply and demand for its bikes, as well as helping with geo-fencing to stop illegal parking of bikes.

Reflecting on his own experience in Singapore, where Nada eventually came to see he could rely on finding a bike each morning, he believes that as Mobike continues to roll out across particular areas of Sydney and other markets, the use of its bikes and people viewing them as a legitimate way to get around will grow.

“People will start to see that there are good bikes and good operators out there,” he said.