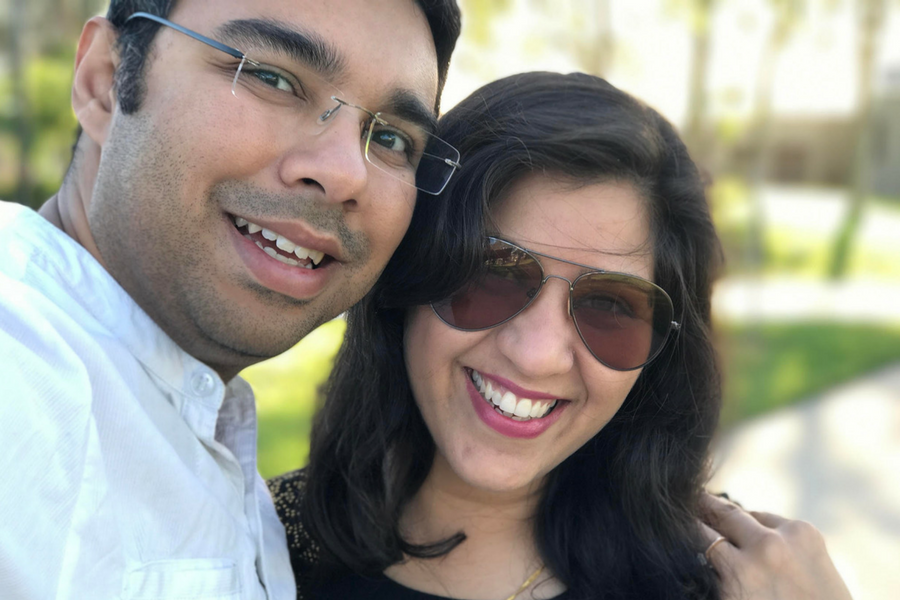 As big-scope virtual reality (VR) experiences and games continue their slow grind towards mainstream popularity, ‘lower key’ VR experiences, like 360 degrees videos and virtual walkthroughs, look to be on the rise.

A win-win for consumers, these experiences work well thanks to their ability to be thoroughly experienced either through a cheap, cardboard VR headset or without a headset entirely, meaning people are to view exciting things such as, say, celebrity outfits during the Oscars, on their Facebook feed.

Soon, the startup will also be introducing a $30 mount for mobile phones, allowing users to shoot effective 360 degrees panoramas on their smartphones, which can then be used to create a virtual tour.

Tours, or “virtualities” as Augment Space’s cofounder Akash Nigam calls them, can then be shared on social media platforms, or embedded in another website.

Moving to Adelaide roughly a year and a half ago, Akash worked on the idea for Augment Space beside his wife Priyanka, as they looked for a way to evolve the concept in a global, scalable way.

“I realised that if you want to scale your business you probably have to move to Sydney, Melbourne or other larger cities, but that wasn’t something that I wanted to do. The only way to scale without that was to go global, and that meant creating an online platform that anyone could access,” said Akash.

Leveraging his already established business that dealt with trade between China, the US, and the UK for sales on Amazon, Akash said he was able to fund the development of Augment Space, which began in October last year. However, balancing the workload and expenditure between the two didn’t come easily.

“Especially going out and…creating the terms of service, the agreements and things like that. It was tough juggling both as once, and the cash-crunches kept on coming. As the nature of the startup goes you never have enough.”

Chatting with a few local real estate agents to validate the idea of Augment Space, the startup moved into St Paul’s Creative Centre, a church-turned-coworking space in the heart of Adelaide that Akash said helped inspire creativity while offering a supportive network.

“It’s a space that inspires creativity in its truest sense. Working out of the space has a lot to do with what we created, in terms of just being here,” he said.

St Paul’s would serve as the first major virtuality created using Augment Space, with the resulting virtual experience able to cause people’s jaw to drop, according to Akash, when they viewed it through a Google Cardboard headset.

While the experience was immersive, the images being used to mesh the experience together, Akash explained, were merely jpg’s. To create a virtuality on the platform, users drag and drop their images to the platform, before the back-end algorithm churning them together into a 360 degree experience.

From there, the virtualities can be published online, or developed further to create the actual “motion” for the walkthrough, allowing users to move between “hotspots” – similar to how you jump back-and-forth a few metres by clicking the arrow on Google Earth.

Hotspot events can also be added to the platform, allowing the designer to customise what an end-user is able to interact with when they reach a certain spot in the walkthrough.

For example, when someone reaches the end of a walkway, there may be an event set up where they can interact with a text information about the space, or additional media. Implementing all these mechanisms simply means operating the toolbar on the side of Augment Space’s design interface.

“The idea is you never have to code with our platform,” said Akash.

“You can also see changes as it happens in a space, across a period of time. So using panoramic shots, you can actually track how the space has changed. It’s something that’s really specialised, since we had to go through a lot of maths to figure out how to not make a viewer lose perspective as they go through time.”

While users will soon be able to utilise their phones, currently the platform will only work with cameras capable of shooting 3D, which Akash said come in at roughly $500-700, or perhaps more, depending on the camera.

This amount, he said, is perfectly suited to users such as real estate agents who will be creating virtualities all the time. Meanwhile, the phone option will be a perfect fit for the average user.

As for Augment Space’s competitors, Akash spoke of one in the US, Matterport, which sells 360 degree cameras capable of translating images into a virtual experience. However, he said this technology has a huge downside due to the expensive pricing, which sits well above US$4000 (AU$5100).

As for new features coming to Augment Space, Akash said there are more than a few in the pipeline, although the startup’s focus will be elsewhere for now.

“Don’t even get me started on features,” he laughed.

“I can actually build 20 new features right now, but it was about time to stop building new features and refinements and say, alright, we’re going to go to market and get real paying customers. We’re preparing our go to market strategy now.”

Augment Space has a number of early adopters already using the platform, including a pool of schools in regional South Australia who are using the technology for STEM education.