Ignition Lane’s Weekly Wrap: the future of shopping, NFT mania and The Sage of Omaha at 91 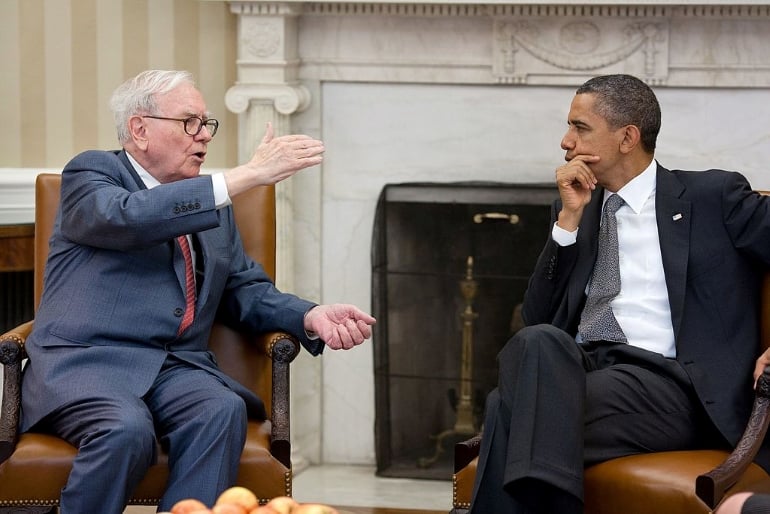 Back when he was just 80, investor Warren Buffett met with then-President Barack Obama in the Oval Office in 2011. Photo: Pete Souza/Official White House

The future of shopping is here

Thanks to a few ANZ startups, our shopping experience might just change forever:

No more receipts. Slyp is enabling consumers to access shopping receipts through bank apps after securing partnerships with Westfield, Chemist Warehouse, the Big 4 banks and lots of other retailers. Handy.

No more checkouts. NZ-based Imagr has invented shopping cart tech that uses cameras and computer vision to detect and label products so that shoppers can checkout without ever interacting with a human or waiting in a line. Japanese department and grocery store giant H2O Retailing Corporation is piloting Imagr’s tech at its 900sqm outlet before a full roll-out across 152 of its chains.

FYI: This week Imagr, Slyp and Reel.Reviews have all indicated they intend to raise $$.

Cheaper shipping. While AusPost shuts down for a few days due to 500+ of its workers having to isolate, Sendle is cutting shipping rates by up to 30% for small businesses under a pandemic relief package.

Funnier ads. The new Media Reactions 2021 by Kantar is out. TikTok, which last week announced an expansion of its ecommerce partnership with Shopify, is a big winner:

Family value. Sydney-based Task Software is being acquired by NZ’s Plexure Group in a $120m deal.

The Houden [family] started Task in 2000 selling third-party software and hardware to restaurant groups, however, the business really took off when their two sons Daniel, a software engineer and Dean, a software designer, developed and commercialised proprietary software for the company, with Daniel teaching himself to code in the family’s garage.

Acquiring IP. Kiwi legal tech startup Sortify.tm has been acquired by QANTM Intellectual Property in a deal worth up to $11m. Sortify.tm says it is the world’s only AI-based SaaS suite of trademark productivity tools, built by trademark attorneys for attorneys. Sortify.tm was the top-ranked online trademark filing website and one of the highest trademark filing agents in both Australia and NZ.

Open raised $31m led by Movac (NZ) and Latitude (UK). Open is the parent company behind the Huddle insurance brand, which now has more than 70,000 customers in Australia and has doubled its revenue in the past 12 months. It also has a white label product to help companies offer a better digital insurance experience. Open is looking to launch in NZ in late 2021, followed by the UK in mid-2022.

Refundid raised $3m led by AP Ventures for its tech designed to eliminate the friction in returns policies for ecommerce retailers.

AirBolt raised $2m to expand its successful Kickstarter project – a GPS tracker that can last up to 12 months from one charge. The GPS trackers are aimed at pet owners, travellers, cyclists and fleet owners.

Komodo raised NZ$1.8m led by Folklore for its student wellbeing solution. Komodo student data, along with surveys developed by psychologists, to identify individuals who may be at risk, and help them tackle common issues such as cyber bullying, harassment, anxiety and depression.

“It took us two years to raise $15m for Giant Leap I — it was the first of its kind in Australia at the time. This time however, we raised $15m and reached close in less than four weeks… There’s no better indicator that people are realising that there is no need to trade off commercial returns for impact.”

We suspect the speed to raise is a testament Giant Leap’s team and track record, too.

Square Peg provided follow on investment to Doctor Anywhere, participating in its SGD88m round. Doctor Anywhere offers online consultations, in-person clinics, home visits, medication deliveries and operates an in-app marketplace for health and wellness products. It now serves more than 1.5 million users. It is available in Singapore, Malaysia, Thailand, Vietnam and the Philippines.

AP Ventures is raising $100m and plans to list on the ASX to give investors the opportunity to get access to emerging BNPL companies. It will rename to Touch Ventures (couldn’t think of a better name??). Afterpay has already committed to tip in the first $10m.

uSpark accelerator program is open for applications until 15 October 2021. uSpark, run by IT service company, Unico Computer Systems, is offering up to $2m in services through the program. Apply here.

NFT mania and other news around the world

Big bootstrap. The US equivalent to Xero/MYOB, Intuit, is reportedly in talks to buy email marketing firm Mailchimp for more than $10bn. The deal is all about making life easier for (a.k.a making more money from) SMBs. If the deal goes ahead this will be an amazing outcome for Mailchimp’s founders – the business has been bootstrapped since it was founded in 2001. Founding story if you’re interested.

Seedy. Andreessen Horowitz has a new $400m seed fund as it hopes to find its next Slack, Okta, Databricks, Samsara and Instagram. In true a16z fashion, the seed fund offers founders more than money:

access to training and content, an advisory group of peer companies, and a network specifically geared towards seed companies, including help with early hiring, early product design, early marketing and growth efforts, and of course, white-glove access to the most extensive customer network in the industry.

NFTs > knitting. Ethereum NFT marketplace OpenSea logged more than $3bn in trading volume in August alone, beating Etsy’s entire Q2 gross sales value. In an AMA on Thursday, Ethereum cofounder Vitalik Buterin says he has been most surprised by the NFT use case for Ethereum. OpenSea was founded in Dec 2017 and last raised $100m from Andreessen Horowitz in July.

DogeMoney. A doge meme NFT that sold for $4m in June is now valued at $225m+ after it was fractionalized into nearly 17B tokens and sold in a one-day auction.

NFTs represent. One of Hollywood’s biggest agencies, United Talent Agency (UTA), signed a deal to represent Larva Labs, the creator of CryptoPunks. First created in 2017, CryptoPunks was one of the first examples of recognisable art collectibles to be tied to NFTs. They now sell for hundreds of thousands of dollars, e.g. last week Visa paid $150,000 for CryptoPunk #7610, a digital illustration sporting a mohawk and green face makeup.

Fun police. The Chinese National Press and Publication Administration says online gaming has an impact on both the physical and mental health of minors. It is now forcing video game companies in to restrict gaming time for minors to three hours a week – from 8 PM to 9 PM on Friday, Saturday and Sunday.

Abort! Abort! Nearly two months after Richard Branson’s flight to the edge of space, it has been revealed that Virgin Galactic’s SpaceShipTwo veered off course. Warning lights flashed during the ascent indicating that the spaceship wasn’t vertical enough to be able to free-glide back with enough momentum to land after reaching space. As it returned, things got a little wobbly and the spaceship moved out of its airspace. Now the FAA won’t let it fly (yet).

Buckle up for a wild ride… Theranos’ Elizabeth Holmes hit the courtroom this week. She faces up to 20 years in prison if found guilty of the 12 charges of fraud against her. To get a flavour of what’s in store, read this thread.

On this day in 1930: Warren Buffett born

*has donated $41 billion since 2006pic.twitter.com/YdBeYiFk1o

GabbinWithGav. Calling all founders, startup ops people, investors… For the month of September we’re offering free 30 min Friday sessions where you can ask us your biggest questions about fundraising, sales, product, people, goal-setting or NFTs (JK, don’t do that. Ok go on, yes, do it). Book here. Spots are filling up fast.