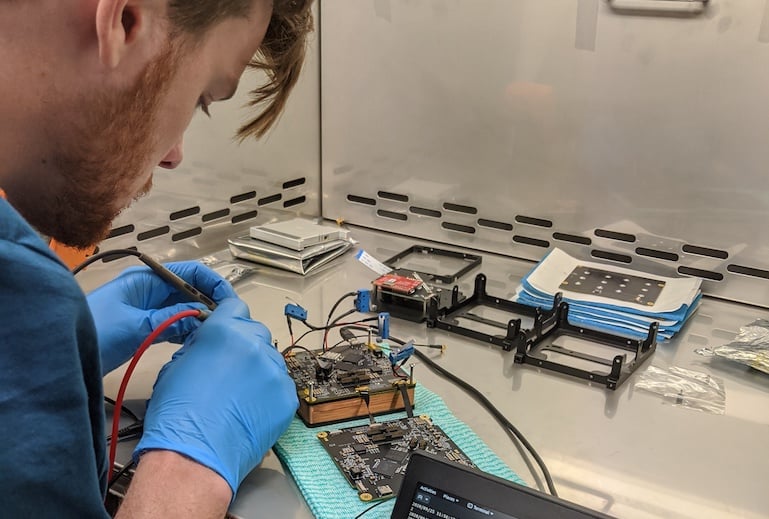 On August 28, a SpaceX rocket will blast off from Cape Canaveral in Florida, carrying supplies bound for the International Space Station.

But also on board will be a small satellite that represents a giant leap into space for our research program here in Western Australia.

Our satellite, called Binar-1 after the Noongar word for “fireball”, was designed and built from scratch by our team at Curtin University’s Space Science and Technology Centre.

We chose this name for two reasons: to acknowledge the Wadjuk people of the Noongar Nation, and to recognise the relationship between our satellite program and Curtin’s Desert Fireball Network, which has successfully searched for meteorites in the Australian desert.

Binar-1 is a CubeSat — a type of small satellite made from 10-centimetre cube-shaped modules. Binar-1 consists of just one such module, meaning it’s technically a 1U CubeSat.

Its main objective is to prove the technology works in space, thereby taking a first step towards future missions in which we hope ultimately to send CubeSats to the Moon.

Binar-1 is equipped with two cameras, with two objectives: first, to photograph Western Australia from space, thus testing the performance of our instruments and hopefully also capturing the imagination of young WA students; and second, to image stars. The star camera will precisely determine which way the satellite is facing — a crucial capability for any future Moon mission.

Our centre is the largest planetary research group in the southern hemisphere, and we participate in space missions with agencies like NASA and the European and Japanese space agencies. To understand the various planets and other bodies in the Solar System, we need to build spacecraft to visit them. But for most of the space age, the costs of building and launching this technology have been a major barrier to participation for most nations.

In the meantime, the rise of consumer electronics has produced smart phones that are significantly more capable than Apollo-era computers. Combined with new launch options, the cost of launching a small satellite is now within reach of research groups and start-ups. As a result, the market for “COTS” (consumer off-the-shelf) satellite components has boomed over the past decade.

Like other Australian research groups, we began our journey into space with a specific mission in mind: to build instruments that can observe flaming meteors from orbit. But we quickly found the cost of buying the satellite hardware repeatedly for multiple missions would be huge.

But then we realised our research group had an advantage: we already had prior experience building space observatories for the remote outback, such as the Desert Fireball Network. This expertise gave us a head start in developing our own satellites from scratch.

Outback observatories and orbital satellites have a surprising amount in common. Both need to monitor the skies, and operate in harsh conditions. Both depend on solar power and have to function autonomously — in space, just like in the desert, nobody is out there to fix things on the fly. They both also experience intense vibration while travelling to their destination. It is up for debate whether rocket launches or corrugated outback roads make for a bumpier ride.

So in 2018, we set to work building a bespoke satellite. For the first two and half years, we made prototype circuit boards and tested them to their limits, refining our design with each version. The testing took place in our space environment lab where we have vacuum chambers, liquid nitrogen and shaker tables, to simulate the different space environments the satellite will experience.

Onboard the International Space Station astronauts will unload Binar-1 and deploy it from an airlock in the Japanese Kibo module. To begin with the satellite will maintain a similar orbit to the station, about 400 kilometres above Earth. At that altitude there is enough atmosphere to cause a tiny amount of drag that will eventually cause the satellite to fall into the thicker part of the atmosphere.

In the end it will become a fireball, like its namesake, and if we are extremely lucky we will catch images of it on one of our ground-based observatories. We expect this to happen after about 18 months, but this time frame can vary because of many factors, such as solar weather. For as long as we can, we will gather data to help refine future missions, and we have already begun to look at ways to collect data as the next satellites crash into the atmosphere.

Launching on the same rocket with Binar-1 will be CUAVA-1, the first satellite built by the Australian Research Council’s CubeSat development program. But although the two satellites will share the same ride to space, their development paths have been completely different.

As was our original plan, the CUAVA team has focused on the development of instrument payloads, while buying navigation systems and other components from Dutch and Danish suppliers.

Our satellite was designed and built completely in-house, which means we can drive down costs by making multiple versions, while constantly testing and refining our hardware for future missions.

There are already six more 1U satellites scheduled in the Binar program, each representing a step towards our ultimate goal of a lunar mission.

Shooting for the Moon

As part of the Australian government’s Moon to Mars initiative, we are carrying out a feasibility study for our Binar Prospector mission, which we hope will involve two six-unit CubeSats making close-up observations of the Moon while in low-altitude lunar orbit.

The earliest we expect this mission to launch is 2025, when NASA begins its commercial lunar payload service. There are multiple opportunities to launch CubeSats to the Moon by the end of this decade, so there will be plenty of options. Most of these questions are the subject of the feasibility study and are confidential at the moment.

Shooting for the Moon isn’t just scientifically fascinating — it will benefit Australia too. By developing completely home-grown technology, we can avoid relying on expensive imported components, meaning the Australian space industry can stand on its own two feet while reaching for the heavens.